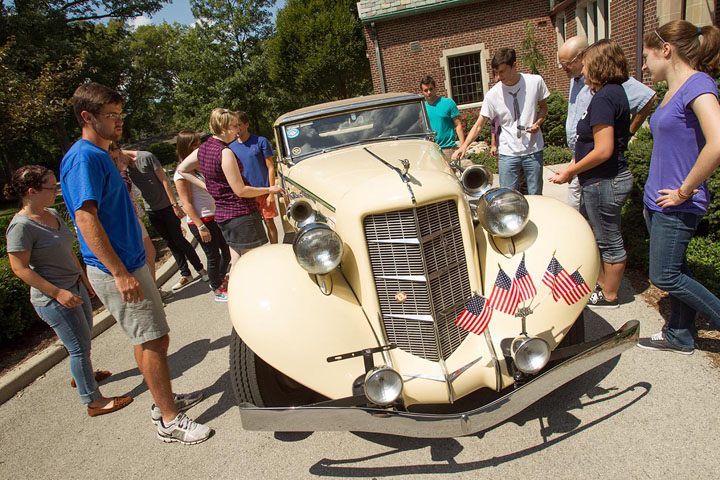 Ball State students show off one of the cars they’ll be profiling: a 1935 Auburn 851 Cabriolet.

The names fall reverentially from the lips of automotive historians and enthusiasts: Auburn, Cord, and Duesenberg. Now, a team of students from an Indiana university is creating a documentary film about the history and ongoing mystique of these great marques that emanated from the Hoosier State.

The film, tentatively titled Innovative Engineering, Rolling Sculpture: Auburn, Cord, and Duesenberg Automobiles, is being produced with a $14,000 fellowship grant from the Virginia B. Ball Center for Creative Inquiry at Ball State University in Muncie. (The author is a 1979 graduate of the university.) The project is headed by Hans Kellogg, an assistant professor of graphic arts in BSU’s Department of Technology. According to Kellogg’s application for the fellowship, the film will explore “the ‘heart and soul’ of three distinct automobile marques,” probing “the past and the present of these three marques, highlighting the recognition they bring to automobile history and the State of Indiana.”

Though the last Auburns were made in 1936 and the final Cords and “Duesies” were manufactured the following year, they do indeed have a “present.” The students will be especially busy this week at the Auburn-Cord-Duesenberg Festival, the annual celebration of the A-C-D cars in Auburn, Indiana, where Auburns and Cords were produced. (Though one of Errett Lobban Cord’s automotive holdings from 1926, Duesenberg was based in Indianapolis.) They will be recording events associated with the Labor Day Weekend festival, including the “Parade of Classics” in downtown Auburn, the collector-car auction at nearby Auburn Auction Park, and the Hoosier Tour run from Auburn to Jackson, Michigan.

According to Kellogg, the students’ care for the project has been reciprocated by the community. For example, the fire department will assist in setting up an aerial shot of cars coming into town for the parade and residents are lodging 14 students in their homes. “The people of Auburn have opened their arms to us,” he said.

To flesh out the saga of the cars and the companies that made them, students will conduct interviews and tap into the resources of museums such as the Auburn-Cord-Duesenberg Museum and the Indianapolis Motor Speedway Museum. The film is being made by students whose fields of study include photography, telecommunications, technology, visual communications, graphic arts, English and story-telling, history, music, and journalism.

One of Kellogg’s motivations for the project is an avowed love of cars. A native of Michigan, he took pride in the state’s dominant role in the American auto industry, but he began to appreciate the carmaking history of other parts of the country. “As I came to Indiana, I came to realize we weren’t always on top of the game,” he said.

The documentary is expected to be completed in time for a December premiere at the Cornerstone Center for the Arts in Muncie. Kellogg said the film will be shown at the 2013 Auburn-Cord-Duesenberg Festival, and he is hopeful that it will be picked up for airing by Public Broadcasting stations.