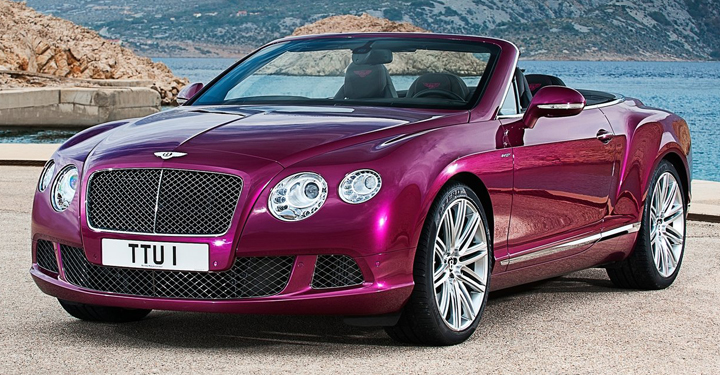 Bentley Crosses Over: Meet the 2016 Bentayga

The GT Speed Convertible is powered by a turbocharged 616-horsepower W12 hooked to an 8-speed automatic transmission. (Non-Speed Continentals with the W12 engine have 567 horsepower). The Speed treatment includes a lowered suspension, a unique black intake manifold, retuned steering, 21-inch wheels (available in silver or dark-tinted), dark-chrome front grilles, and the “Mulliner Driving Specification,” which includes drilled accelerator and brake pedals, diamond-quilted upholstery on the seats and door panels, a knurled gear lever, and optional embroidered emblems in the seat backs. Options include carbon-fiber or wood interior trim, dark-colored machine-turned aluminum panels on the dashboard, and a high-end “Naim for Bentley” audio system.

The transmission shifter is equipped with a Sport mode gate, and it conjures up quicker throttle response, higher-rpm shifts, and faster kick-down shifts. Just like all other Bentley Continentals, the 2014 GT Speed Convertible is all-wheel drive.

All told, this droptop reaches 60 mph from a stop in 4.1 seconds and peaks at 202 mph. Not that Bentley buyers typically care, but the 2014 Bentley Continental GT Speed Convertible is rated to get 12 mpg city/20 mpg highway.

Bentley did not announce on-sale dates or pricing, but, as they say, “If you have to ask, you can’t afford it.”

CG Says: The already sumptuous and athletic Continental GTC finally receives the “Speed” formula. Bentley boasts that it has created the fastest convertible in the world with this vehicle, and we’re not going to doubt it. Whoever thinks it’s a good idea to hit the top speed with the top down is in for one wild ride. However, that’s not the point. Just as a luxury SUV equipped with serious off-roading hardware that will rarely see any surface rougher than an unpaved parking lot, owners of this Bentley are unlikely to exploit the Continental GT Speed Convertible’s full 202-mph potential. The top speed simply stands as a bragging right. If you have to ask “What’s the point of a fast car if you can only go 65 on the highway?” you just don’t understand.