The folks that bring you Consumer Guide and The Daily Drive also produce Collectible Automobile magazine, a highly respected bi-monthly automotive history magazine that is about a year and a half away from celebrating its 30th anniversary. One of CA’s most popular regular features is Car Spotter, which runs two or four pages every month. It’s a simple concept: Eagle-eyed readers from all over the world spy interesting old cars in their daily travels, take a few decent snapshots, and send ’em in to us. These aren’t car-show photographs or glamour portraits; these are “man on the street” pics of vintage vehicles hidden in plain sight, be it on the street, in someone’s backyard, or in the supermarket parking lot.

It’s the serendipity of discovering an intriguing vintage machine peeking out from the sea of modern-day commuter-mobiles that makes Car Spotter so much fun. The vehicles themselves are in wildly varying states of repair. Their conditions run from “semi-pristine” to “attractively patina’ed” to “rough and rusty” to “soon to be reclaimed by the elements.”

I’m cheating the Car Spotter format a bit with the ’69 Mercury Cougar Eliminator shown here. I came across it at an impromptu car show that took place in conjunction with the Wisconsin Hot Rod Radio show’s 5th Anniversary Party, held just outside Milwaukee last month. In between my duties manning the Collectible Automobile/Consumer Guide booth we had set up at the party, I had time to run out to the parking lot and fire off some quick shots of this proud-but-weather-beaten muscle car as the sun was setting.

Checking out the 1980 Cougar

I’m assuming the Competition Orange paint with white stripes is the original factory finish. Since it has fresh-looking radial tires on clean OEM-style wheels, I’d guess that the suspension has been refurbished. I didn’t get a look under the hood, so I don’t know if it’s packing a 351, a 390, a Cobra Jet 428, a Boss 302, or something else.

For me, this car falls under the category of “attractively patina’ed.” A decade ago, it would have been a no-brainer to give a car like this a full-blown restoration, and maybe that treatment is in the cards for this one. In recent years, however, there has been a strong “it’s only original once” movement in the collector-car hobby. “Barn-find” survivors are rightfully being appreciated for the true historical artifacts they are, blemishes and all, and many car collectors are preserving vintage vehicles instead of completely refinishing them, even if they are noticeably rough around the edges.

This Eliminator has survived more than 40 years in relatively solid, impressively unmolested shape. It would be a fine candidate for a complete restoration, but fixing all the little dings and dents and repainting it would erase a lot of that preserved history. Whatever this Cougar’s fate might be, it was pure serendipity to spot it and bask in its ragged glory for a couple of minutes. 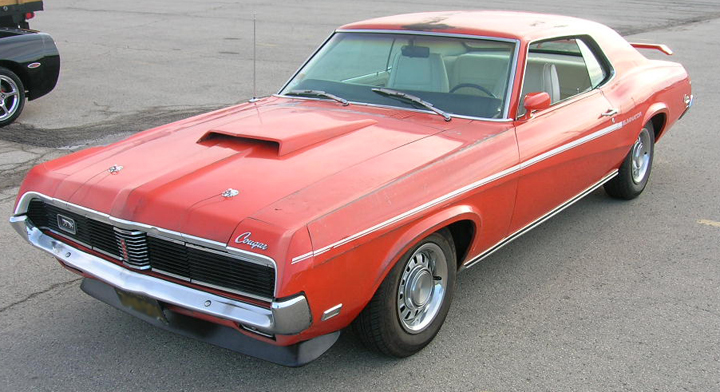 Checking out the 1972 Cougar