New ATS Compact Won’t Embarrass Cadillac Like the Cimarron Did 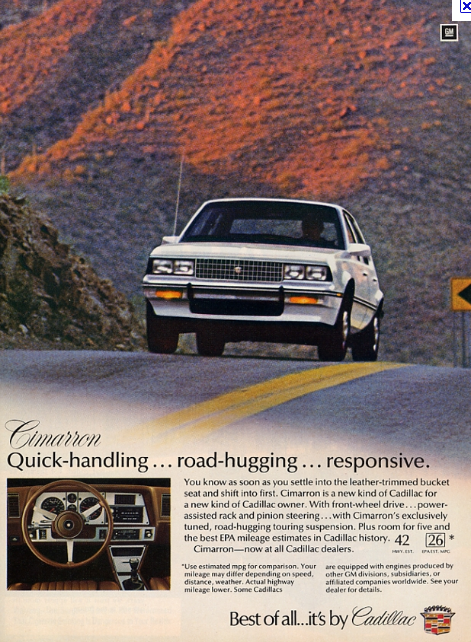 The 2013 Cadillac ATS will be the first compact Cadillac since the Cimarron, which was introduced more than 30 years ago.

As many of us recall, Cadillac was under pressure from its dealers to bring out a fuel-efficient compact after it took a beating in the two energy crises of the Seventies. The resulting Cimarron was a gilded version of the Chevrolet Cavalier introduced in late 1981. It was a rush job without enough to differentiate the Cadillac from its Chevy roots. The chief problem was an underpowered 85-horsepower 4-cylinder. Cadillac was a bit coy about the car by labeling it “Cimarron by Cadillac” rather than calling it Cadillac Cimarron. The Cimarron bombed in the marketplace and damaged Cadillac’s reputation. In summary, the Cimarron proved to be a very good Cavalier but a terrible Cadillac.

The ATS has much more promise. For starters, it delivers up to 320 horsepower. ATS has also undergone extensive testing on the German Nürburgring racetrack to get the suspension and powertrain right. This time the Caddy should offer some serious competition to BMW and Audi.