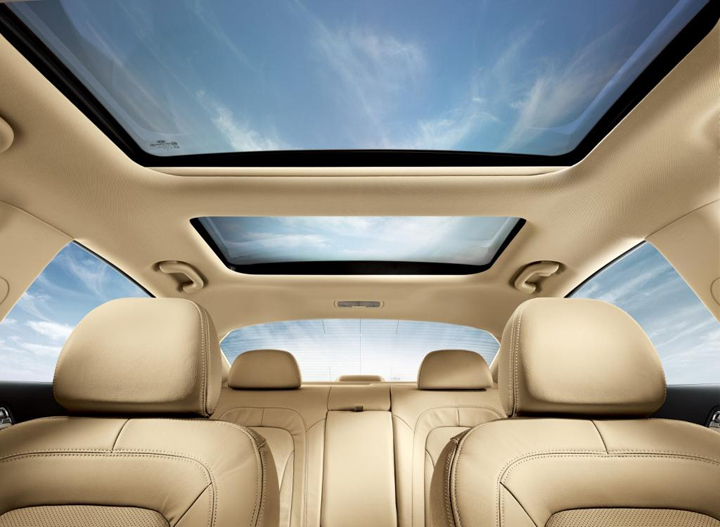 Chris has a laundry list of reasons why you shouldn’t buy a panoramic sunroof, such as the one on this Kia Optima.

Generally speaking, there’s little difference in manufacturing costs between a small vehicle and a large one or between a cheap model and a loaded version. This means that automakers have a powerful incentive to push large, fully equipped models with higher per-unit profit margins—that is, a bigger difference between production cost and sticker price.

Manufacturers also maximize their profits by pushing options. That’s why most vehicles are available with so many extra-cost goodies. As the theory goes, the more bells-and-whistles a given model offers, the more likely a buyer will find something—preferably several things—that he or she just can’t live without, especially if those things are not available on competitive products.

This is not a new idea. Car companies have always been looking for “a difference to sell,” as one auto executive said back in the 1950s. That can involve styling, horsepower, fuel economy, gadgets, colors—you name it. Whether a “difference” is functional or frivolous is beside the point. All that matters is that people are willing to pay good money for it.

The thing is, not all options are good value from a common-sense point of view. Some are merely cosmetic or “vanity” features; others may be functional, but don’t work quite as advertised. Of course, “good value” is always in the eyes of the beholder, and everyone has the right to spend their money as they wish. Nevertheless, I’ve identified five new-car options that strike me as things you can live without, shouldn’t want in the first place, and shouldn’t waste your money on. Feel free to disagree, but remember: I’m a professional road-tester with 30 years’ experience, and you’re not (he says with a chuckle).

This is truly a bad idea, as it typically costs thousands extra and is often bundled with other dubious stuff. The main problem with an XL glass roof is the extra weight it puts at the top of the vehicle—exactly where you don’t want it. Why make a vehicle more top-heavy and thus potentially less stable in turns (especially if it’s an SUV that’s already kind of top-heavy)? Though some manufacturers are switching from glass to much-lighter resin panels, they’re still cutting a king-size hole in the single largest structural element of a modern unibody vehicle (apart from the floorpan). That compromises long-term rigidity and increases the chance of early-forming squeaks and rattles. Moreover, even with heavily tinted glass, big sunroofs can mean toasty interiors on sunny days. Yes, you can always deploy interior sunshades, but that rather negates the “panoramic” benefit. I’d even think twice about a normal-size sunroof. I’ve owned two cars so equipped, and I mostly used the thing at low speeds to aid interior ventilation—and not very often at that. Save your money.

I’ve tested many newer vehicles with “adjustable” suspensions. These typically alter shock-absorber firmness, although some systems also vary spring firmness and steering effort. They’re supposed to let the driver choose sporty handling, good ride comfort, or a blend, but in most models, I’ve found so little difference among the settings that you wonder what all the fuss is about. Try before you buy.

This appeals to digerati and those folks who don’t parallel park very well. But why is it needed when so many vehicles have rearview cameras and obstacle-warning sensors? Besides, parallel parking is a basic skill that any driver should be able to perform. Yes, I know it’s not always easy, especially in a high-riding truck, but it can be mastered. All it takes is practice.

Big, blingy wheels may look cool to some eyes, but they can make for a rocky ride. Why? Because, for example, if a car has standard 17-inch rims and you upgrade to optional 19s, the larger rims leave less fender-well clearance for the tires, which then need slimmer sidewalls to fit. As a rule, narrow-sidewall (aka low-profile) tires don’t cushion bumps as well as “fat sidewall” rubber, and many automakers compound the problem by including stiffer “sport” suspension tuning. (You do know that tires are as much a part of your suspension as the springs and shock absorbers, right?) Again, try before you buy.

A couple recent test cars remind me how pointless this gimmick is. It’s nothing more than a door-sill cover with a light in it so your vehicle’s name can appear in glowing letters. In many cases, you don’t even need to have the headlamps on. It’s still a fairly uncommon feature, so it can seem rather dramatic the first few times you encounter it. After that, though, it’s no big deal—especially by day. What’s more, you’re going to be about the only person who sees this little billboard unless you habitually use valet parking, and who are you trying to impress anyway? Illuminated step-plates are sometimes packaged with “ambient” interior lighting whose color can be changed to match your mood ring. This, too, is a short-lived novelty, based on my experience. Ah, but automakers know that such “personalization” features get buyers to open their wallets wider. Don’t you be one of them.