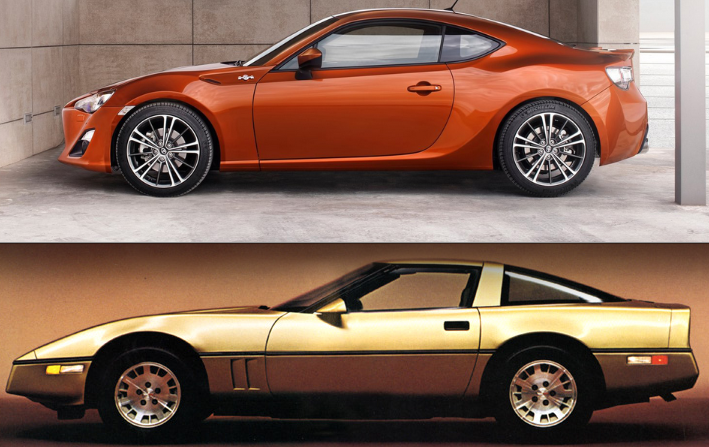 Auto journalists and message-board fan boys are a whiny lot. Seriously. Spoiled, too. Poke around online and read a couple of reviews of the all-new 2013 Scion FR-S. Go ahead, I’ll wait. When you get back, tell me how many reviews made note of the FR-S’s lack of torque and “mere” 200 horsepower. A few did, right?

Seems folks have forgotten how to have fun in a car—auto writers especially. Because we have access to the strongest and fastest, we become easily jaded. Forget that the FR-S is very likely the best-handling Toyota ever; just focus on the common looking figure in the horsepower box.

Chevrolet skipped a year when it launched the fourth generation of its venerable Corvette. The new model arrived a little late to be a 1983, so that year was skipped and the “C4” hit dealer lots as an ’84 model.

Under the hood of this much-anticipated update was a 205-horsepower “Crossfire” injected 5.7-liter V8. All that muscle—combined with a new, lighter chassis—had to mean good things. And by all measures this was the baddest-ass American car then on sale. So, how fast was it? According to a couple of buff books, America’s sports car ripped to 60 mph in just seven seconds . . . about eight-tenths of a second slower than a 2013 Scion FR-S. 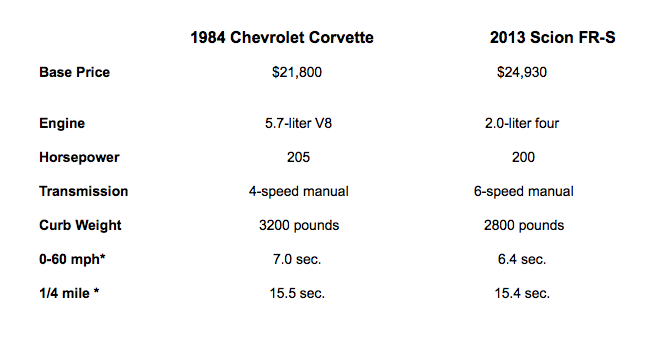 Sure, that ’Vette had more accessible torque, but torque is a crutch for people who are too lazy to keep a real engine on cam. My first real car, a 1985 Volkswagen Scirocco, boasted all of 100 pound-feet of torque. According to Road & Track, it would hit 60 mph from a stop in 10.1 seconds. Yet, the car was a blast to drive. Like the FR-S’s mill, the VW’s engine was smooth and free-revving, and keeping the revs up was far more fun than lighting the tires up from a stop.

So, is the FR-S light on torque? Sure. I wouldn’t want to tow a houseboat with it. But the FR-S is a car that demands and rewards attentive driving. If keeping a spin-happy engine in its sweet spot is too much work for you, go buy a Hyundai Genesis Coupe with the V6 and automatic transmission; you’ll be very pleased.

My point is this: You can easily buy a car that is faster and more powerful than the FR-S, but I challenge you to buy one that’s much more fun to drive. Lazy journalists and whiny message-board trolls aside, 200 horsepower is plenty. You just have to be willing to make it work for you.