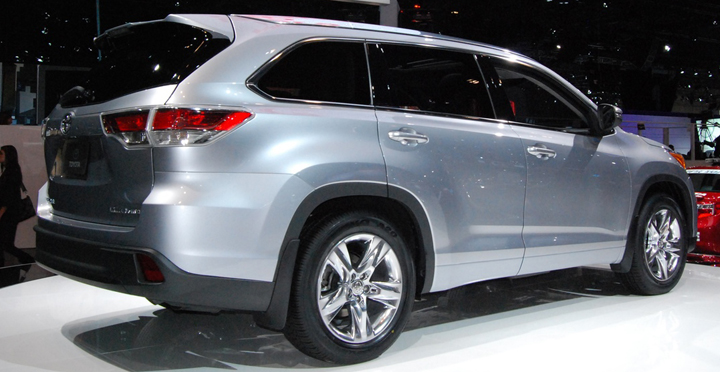 Highlander will seat up to 8 passengers, making it one of only three midsize crossovers to do so (the others are twins Chevrolet Traverse/GMC Acadia and the Honda Pilot). Buyers will have the option of selecting a bench seat for the 2nd row or two-place captain’s chairs with a collapsible center storage tray. The cabin is 4.3 inches wider, allowing for more shoulder space and easier access to the 3rd row.

Available drivetrains don’t change much. Entry-level models with front-wheel drive will offer a 2.7-liter 4-cylinder engine paired with a 6-speed automatic transmission. The volume 3.5-liter V6 returns, but for 2014 it teams with a 6-speed automatic (replacing the previous 5-speed). This engine is available on models with front- or all-wheel drive. Toyota will continue to offer a gas/electric hybrid model with standard all-wheel drive as well. It pairs a 3.5-liter V6 engine with an electric motor and is mated to a continuously variable transmission (CVT) that behaves like an automatic.

CG Say: The Highlander was in pretty desperate need of an update in order to bring its convenience and safety features more in line with other 3-row, 7- and 8-passenger crossovers. It hits the mark in these areas, and the revamped interior looks great, much more like Toyotas of days gone by. Unfortunately, the exterior styling, while bold for the company, looks a bit too much like the Subaru Tribeca, a vehicle few would consider attractive. Hopefully, there will be some additional refinement before full production commences.