Drive a Mitsubishi i and Watch Your Wallet Go Flying 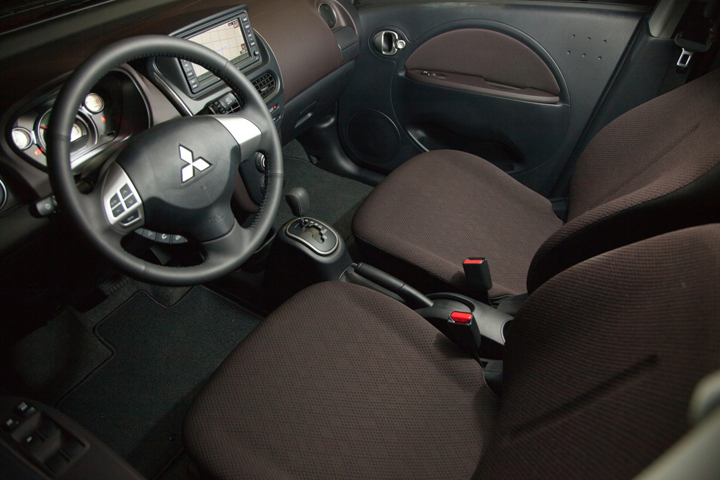 Can you spy the i’s storage bins? In this photo, a tiny one is hidden behind the steering wheel, and each door has a narrow bin. For this author, the seat cushions were the real problem. (Mitsubishi i cabin)

If you’re considering buying a Mitsubishi i, make sure you have deep pockets—literally. You’ll need ’em to put all your stuff.

During my three-day stint in the pint-sized electric vehicle, I almost pulled an Albert Brooks. In the 1991 movie Defending Your Life, Brooks was fiddling with a Barbra Streisand CD when he ran into a bus, ending his so-called life. When I drove the i, I too was distracted—because my stuff was falling over the place.

The problem isn’t just the paucity of storage space (i.e., cup holders and bins) but the seat cushions. They are small. They are lightly bolstered. And they are almost flat—not significantly tilted like those in a conventional car. When I put my wallet on the passenger seat, it fell to the floor. My stack of papers went flying, and my glasses fell four times—including twice when I stuck them between my legs in the driver seat, once landing under the “gas” pedal.

We’ve sung the praises of the Mitsubishi i in previous articles and blogs, saying it could be a real money-saver in the long run and that it feels liberating to drive gas-free. But, boy, owning the i (which is smaller than electric-car rival Nissan Leaf) means putting up with an awful lot of inconveniences.

Your range is an estimated 62 miles, meaning you have to be diligent about charging and careful that you don’t run out of juice (read: being stranded on the side of the road). Bring a hat and gloves, too, because driving with the heat on will reduce your range dramatically. (At one point, my gauge said I had 50 miles left, but when I turned the heat full-blast, it dropped to 35.). Acceleration is sprightly in city driving except when in Eco mode, which makes driving tedious. B mode, which maximizes the regenerative brakes, is also unpleasant, as you get a “reverse” sensation that you feel in the pit of your stomach whenever you take your foot off the brake.

Driving the i also means dealing with a cramped cabin, low-end interior materials, an unpleasant ride when driving on less-than-perfect roads, and a dearth of comfort and convenience features.

But what really annoys me are the flat and tiny front seats. Above all else, I need a place to put my stuff!