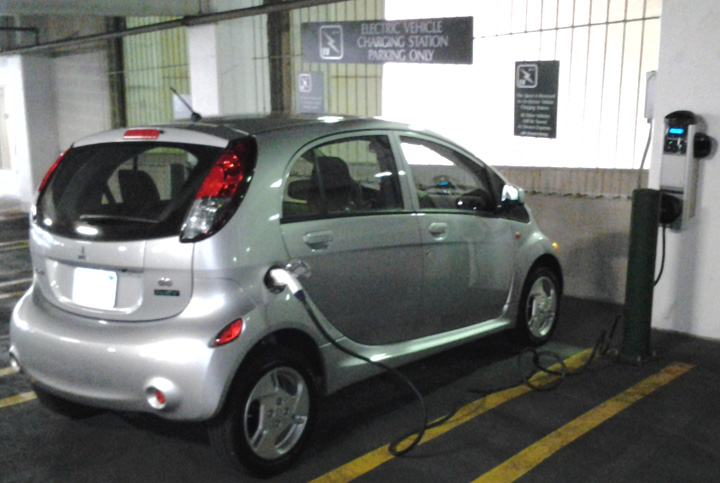 The Mitsubishi i is a new electric car. It relies exclusively on batteries and an electric motor for propulsion; no gasoline or diesel fuel here. After a weekend of driving our new long-term-test 2012 Mitsubishi i, I made a few observations and encountered a few new challenges presented by this electric car—and electric cars in general.

This Mitsubishi can travel about 62 miles on one charge. One must remember this before heading out for the day. I live 9.8 miles outside of downtown Chicago. When I went to hang out with friends at a concert in that area, I had to factor that driving distance into my total mileage. Afterward, we went out looking for a restaurant, and that’s more miles on the odometer. (As a side note, each of my passengers had only two things to say about the i: “Wow, it’s quiet” and “Dang, it’s ugly!”) By the time I got home that night, there were only 32 miles of charge remaining.

The next day I again ventured downtown, but I planned my route to take me to an electric-vehicle charging station. ChargePoint, the company that makes most of the pay-per-charge electric-vehicle charging stations in use around the Chicago area, has a handy, interactive map on its website showing the locations of all of its stations. After consulting the map, I determined the only one within a reasonable walking distance of my downtown destination was in a parking garage. I knew parking garages weren’t free, but I went for it anyway.

Once I arrived at the garage, I was shocked to see that parking alone (be it conventional or electric cars) cost $21 just for the first hour! That didn’t include the fee for the electricity. Since the car’s propulsion battery needed some juice, I swallowed hard and proceeded inside. After taking my parking stub and finding the electric-vehicle chargers, I waved the car’s ChargePoint RFID access card in front of the charger’s electronic reader, which unlocked the charger’s J1772 handle and cord. I proceeded to plug in the car, made sure it started charging, and then left to go about my business.

After an hour, I returned to the car to find the charger had stopped inexplicably. Though the battery wasn’t even close to full, the charging cord was still plugged into the car. It’s a mystery why it stopped, but I have a few theories. Maybe the access card had a problem that didn’t manifest itself until the car had been charging for a while? Maybe some joker walked over to the car, unplugged it, then plugged it back in? Whatever the case, I had more than enough charge to get home, so, begrudgingly, I unplugged the car, paid the hefty parking fee, and left the garage.

On the way, I spied a Nissan dealership with that automaker’s electric car, the Leaf, parked out front. Car dealerships in Illinois are required by law to be closed on Sunday, but dealers encourage customers to browse their inventory during this time. The parking lot’s gate was open, so I drove inside and spied a charging station. This one was an example of the unit Nissan sells to Leaf customers for installation in their garages, so there was no ChargePoint card reader. It would appear that Leaf owners can simply pull in and charge their cars for free. Moreover, the standard J1772 charging handle fits any EV, including the Chevrolet Volt and Mitsubishi i. Though it would have been ironic to charge a Mitsubishi at a Nissan-sponsored station, I decided against it. Besides, I didn’t have enough time to get a decent charge.

When I got home, I still had some errands to run, so I spent the rest of the day tooling around in my own gas-powered car. I wanted to conserve the remaining battery power in the i just to be sure I could make it back to the office (and our installed electric-car charger) on Monday.

Now, to be fair, if I owned one of these vehicles, I would likely install a charging station in my garage. Topping up the battery every time I returned to the garage would eliminate this weekend’s concern of running the battery “dry” on short, urban trips. I’m sure that my trepidation also is a product of my inexperience with this electric car, and electric cars in general. After a while, I may become more comfortable with the car’s range, and stay calm as the range meter drops as I drive. Maybe the next time I drive our long-term Mitsubishi i, I won’t have so many around-town trips to make. If I do, I suppose I could consider taking public transportation. 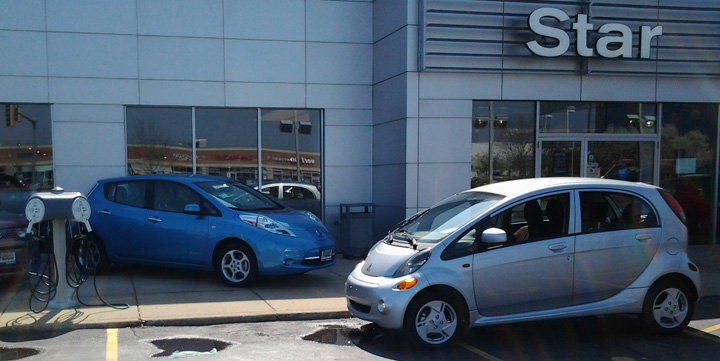 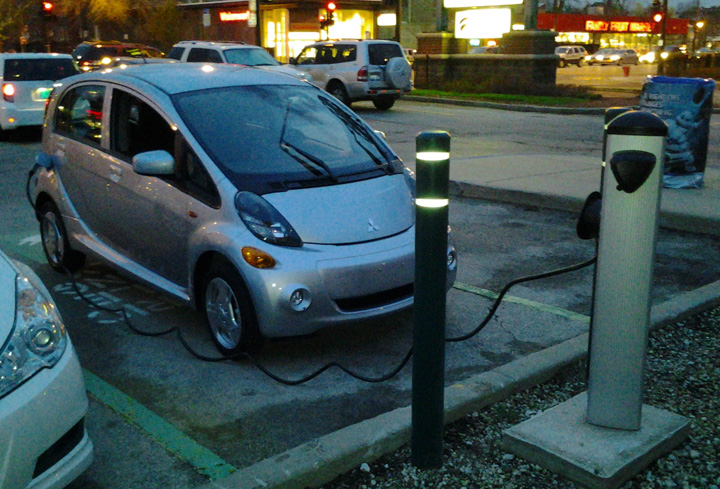 On the way home, Dave spotted a charging station at a Nissan dealership (top photo). The company’s Leaf electric car is in the background. On a separate occasion, Dave charged the Mitsubishi at a Sears Auto Center (bottom photo).