Durango vs. The Germans: Our Long-term Dodge Hustles Seven Tourists Around Chicago 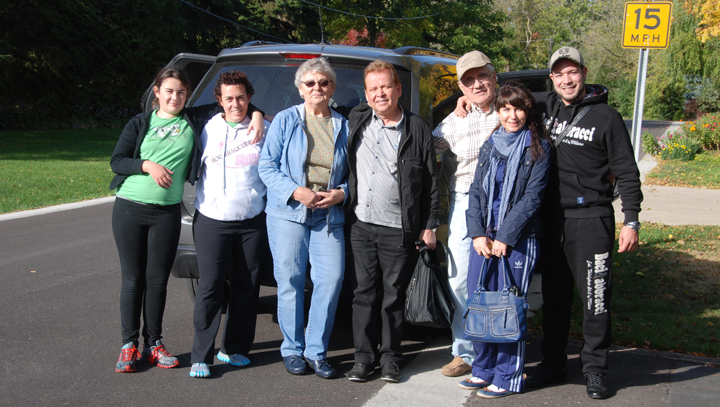 A few years ago, my family and I spent a fabulous week with relatives in Munich. Among the highlights of that trip was a caravan road trip to Vienna in a pair of my cousins’ cars. Seven of us made the trip, a trip that I now include among the more memorable ways that I have ever spent personal time.

This past week, we got a chance to repay the favor. From Munich came my cousin Karl, his beautiful daughter Tania, and her storybook, Euro-charming fiancé Marcello.

For one week, we did the things that only tourists do, which, if you live in Chicago, is pretty cool stuff. We went to Navy Pier and rode the Ferris wheel. We gazed at the city from the Willis Tower (formerly Sears Tower) observation deck, and we dined at Superdawg and on deep-dish pizza. I did, however, bow out of the shopping adventure to Woodfield Mall.

The week’s travel capstone came in the form of a single long trip—a “going to Vienna from Munich” type ride, if you will. To catch up with some relatives up in the North Woods, we packed up the Durango and made the drive from Palatine, Illinois, to Spooner, Wisconsin (population 2,681).

Like the ride to Vienna, the ride to Spooner was peaceful and scenic. Birch trees replaced the conifers on this trip, and cheese and fudge shops took the place of the occasional nameless castle.

At any given time, seven of us seemed to be going to any given destination. While only three of us are from Munich (and Marcello is technically an Italian national living in Munich), the rest of us are, in fact, German. So this was a single-nation challenge for Consumer Guide’s long-term Dodge Durango Crew. The challenge was accepted and handily dismissed, as I cannot imagine having moved so many people, with so much luggage, so easily and comfortably.

Here are some highlights, lowlights, and notes regarding the Durango’s week of hauling Germans around:

Highlights
Comfort: Of the seven folks usually on board, three were petite or preteen and the rest were full-size adults. We all fit just fine, with only a quibble or two worthy of note. See below.

Cruising: For as nicely as the Durango rides with a couple of folks on board, it rides like a Mercedes-Benz S-Class when packed with people and stuff. Additionally, the cabin is quiet enough for casual conversation, even at speeds just under those typically noticed by the Wisconsin State Police.

Cost: With a boatload of folks and suitcases on board, and moving at 65 mph plus, the Durango averaged . . . wait for it . . . almost 25 mpg on our trip to Wisconsin. I’m at over 21 mpg for the week, which included all sorts of city driving, including some savage rush-hour stop-and-go work.

Class: My guests from Munich were very impressed by the Durango, a vehicle that they took to be a luxury ride. This from folks from Munich . . . you know, where some pretty nice luxury cars are produced.

Lowlights
Punch: Saddled with what I figure was 1,500 pounds of people and stuff, the Durango would occasionally struggle to find a suitable gear when our drive got hilly closer to Spooner. It never wanted for power, however, as a deep stab of the throttle always returned additional oomph.

Crunch: The center position of the 2nd-row seat is sculpted to fit only the narrowest of riders. If you can put the kid there, you’ll be fine; for longer rides, an adult in the middle will be wont to squirm a bit. Also, even though folding the seats is simple enough, the pass-through to the 3rd row presents a mild challenge for adults. You’ll want to stick the most agile riders all the way in back. Once situated, however, 3rd-row riders will find surprising room.

Other Trip Notes
Deep-dish pizza seemed to be more popular with our guests than vegetarian Vietnamese food. Also, as much as most American stuff seems like a bargain to our friends who are paid in Euros, cigarettes—at least around Chicago—are absurdly pricey compared to like brands sold in Germany. I will consider this revenge for what Mercedes charges for heated seats on the GLK 350.