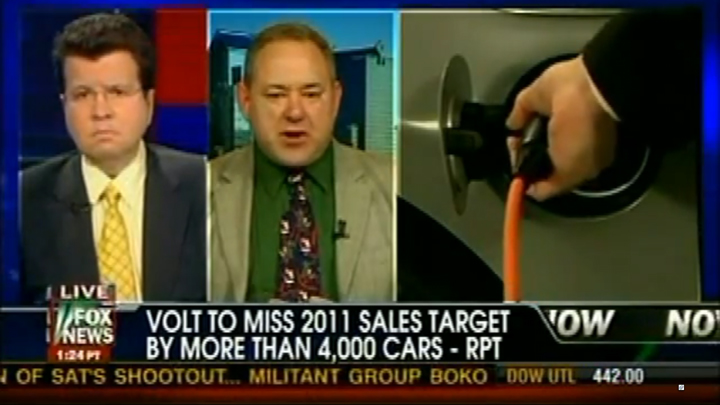 There’s a Devo greatest-hits anthology called Pioneers Who Got Scalped.

If that title sounds a little self-pitying to you, it’s likely you don’t recall just how explosively radical Devo music seemed back in the late Seventies.

At one point my mother, who had somehow become aware of the band and had learned only that they were very strange, queried me accusingly with, “You’re not listening to that Devo band?” She would later blame my friend Tony for being a bad influence and exposing me to things generally unwholesome.

And so it goes with the Chevrolet Volt and Nissan Leaf.

As I write this, pundits at Fox News and elsewhere have spread the word that electric vehicles do not sell well. In the case of the Volt, Fox News has also spread the word that the car is expensive to own and randomly bursts into flames. (Note: Rather suddenly Fox seems to have come around on the Volt. Check out this video for details.)

It would be pretty easy to chalk up anti-Volt/Leaf punditry to simple political divisiveness, but it’s really not that simple.

Recall that not-in-any-way conservative David Letterman ranted for part of a show about the failings of the Volt. In fact, so damning was Letterman’s condemnation of the Volt that General Motors Vice Chairmen Bob Lutz was compelled to appear on the show to set the record straight on a number of factual points.

And so it goes.

The idea of plugging your car in instead of filling it with gas is a fairly abrupt paradigm shift. And with sudden change we tend to focus on the downsides of that change: Electric cars are expensive, we can’t go on long trips, the car looks funny, Bill O’Reilly made fun of it.

Not that some of these complaints aren’t legitimate concerns, but for folks for whom these points aren’t issues, there’s still the potential stigma of being part of some sweeping, slightly unholy cultural morphing. Folks known to marketers as “early adopters” embrace being on the cutting edge, but a lot of people don’t. And about now, carmakers are looking for electric-car sales volume beyond the techno-brave.

So, just like back in 1980 when, while scrolling down the AM radio dial, you might have switched from the safe charm of Rupert Holmes’ The Pina Colada Song to Devo’s provokingly bizarre Whip It, change can be jarring.

But, give this time.

Society has survived the change from leaded to unleaded gas, the replacement of Sean Connery with Roger Moore as James Bond, and the bumping of the Carpenters off the Billboard charts for the likes of Devo.

It’s worth noting that last year Devo released its first new album in over 20 years. Not only was Something for Everybody well received critically, no one found it especially jolting.