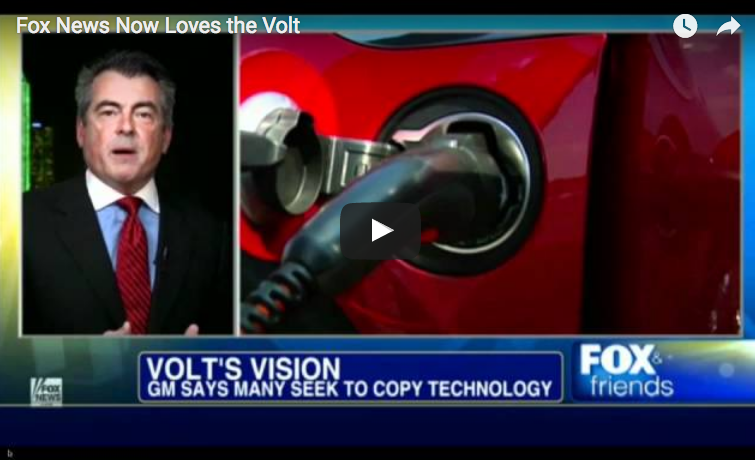 Fox News and the Chevrolet Volt

A victim of partisan politics since its introduction, Volt became a symbol of everything commentators on the popular conservative news channel found troubling about President Barack Obama and especially the auto-industry bailout.

Quite suddenly, everything has changed.

In an interview on Fox & Friends earlier this week, Lee Spieckerman, a self-described political conservative and the CEO of Spieckerman Media, lamented the “bad rap” the Volt has been getting on Fox. In his words, he was “setting the record straight.”

Are You a “Green” Driver? Take the Quiz

In the process of debunking a number of popularly believed Volt misconceptions—most significantly, the belief that the current president forced General Motors to build the car—Spieckerman described the Volt as “a wonderful vehicle” and “an anti-terrorist weapon.”

In the five-minute interview, host Steve Doocy fully supported Spieckerman’s commentary. Doocy added that he had recently test drove the Volt and found it to be a “cool car” that was as “smooth as glass.” The Fox graphics department put up a chart proclaiming how much less oil the U.S. would have to import if 30 million Americans drove Volts.

One is forced to wonder why there has been this sudden change of heart at Fox News. Also, because this interview, on the nation’s most-watched news network, served as almost an “infomercial” for the Volt, it will be interesting to see how sales will be affected. Stay tuned. . . .