Particularly from the windshield forward, the new Ford Shelby GT350 is far removed from its Mustang origins. Not only is the front-end sheetmetal actually aluminum, but styling is revised and the engine is modified to produce substantially more power than the one used in the Mustang GT. Shown is the race-focused GT350R version, which can be identified by its red (rather than grey) grille badge and taller rear spoiler. This is one serious track car that still manages to be street legal.

Most people will likely look at the Ford Shelby GT350 and think “Mustang,” but those in the know will recognize it as something far more special than that.

Since the mid-1960s, chicken farmer turned race driver turned car manufacturer Carroll Shelby has lent his name to all sorts of performance machinery ranging from hyper-performance 2-seat roadsters to haul-a** pickup trucks. But he was perhaps best known for his converted 1965 Mustang fastbacks that tore up the racetracks under the Shelby GT350 moniker.

It wasn’t the first car to wear the Shelby name, but the GT350 of 1965 was perhaps the best-known. Starting with a Mustang fastback, Shelby modified the engine, suspension, brakes, and other items to turn the little pony into a race-track terror.

Although recent Mustang-based cars carrying the Shelby name have been Fords (the ‘65s were titled as a Shelby), the new GT350s due out next month are even further removed from their Mustang donors than were the cars that Carroll Shelby created under his own name. While the basic bodyshell is clearly a Mustang, the entire front end – though similar in appearance – is heavily revised, with the sheetmetal being aluminum. The front fenders are wider, which prompts the car’s side sculpturing to end in a vertical vent rather than melding smoothly into the wheelwell. The nose is also lower, which results in a shorter grille, and the chin spoiler beneath is decidedly more aggressive than a Mustang GT’s. Furthermore, there’s no Mustang nameplate or sprinting-pony badge (or even a Ford one) to be found; the only emblems read “Shelby” or “GT350.”

Ford has most recently applied the Shelby moniker to the ferocious, supercharged, 662-horsepower GT500 coupe and convertible that were last seen for 2014. Those cars were dropped with the Mustang’s 2015 redesign, and the newest Shelby models are aimed more at on-track prowess than straight-line speed – just like the original.

That doesn’t mean, however, that the new GT350 is lacking in the power department. In fact, it boasts the strongest naturally aspirated engine a factory-built Mustang has ever seen. 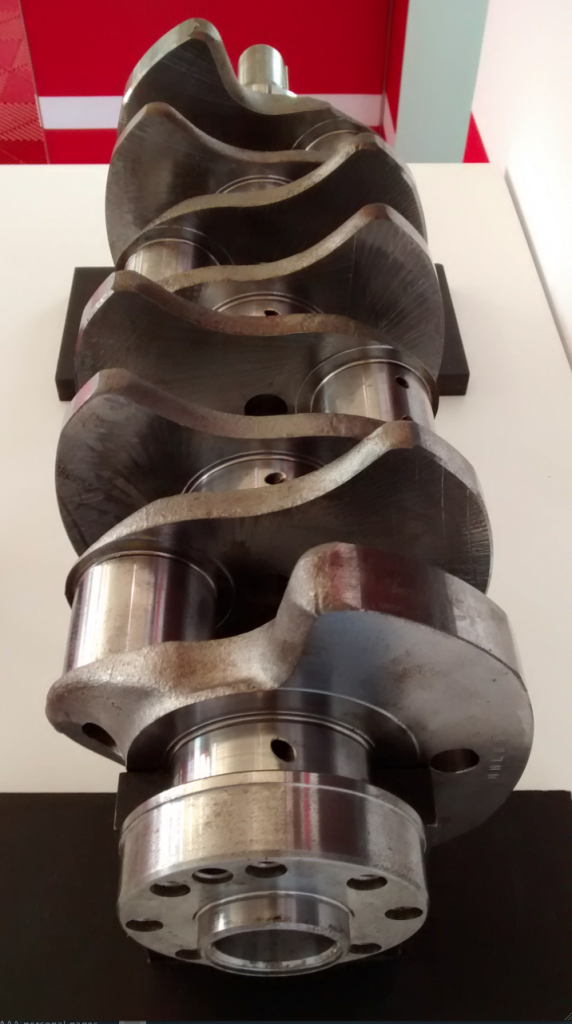 The heart of the GT350’s 5.2-liter V8 — and the main reason it makes so much power — is its unusual flat-plane crankshaft. This kind of crank has its throws spaced 180-degrees apart (thus the “flat” designation) which allows greater exhaust flow at high engine speeds and thus more power than the crankshaft normally used in V8 engines, which has throws spaced 90-degrees apart to reduce vibration.

Whereas the well-known Mustang GT carries a 5.0-liter V8 rated at 435 horsepower – hardly a wimpy number itself – the new Shelby GT350s will run with a specially modified 5.2-liter V8 making a whopping 526 horsepower. But what’s really noteworthy is how it goes about breaking the magical 100-hp/liter barrier.

One of the primary changes made to the GT350’s engine is that it uses a flat-plane crankshaft with throws spaced 180-degrees apart. Most V8s with cylinder banks set at a 90-degree angle (which virtually all are) use a crankshaft with throws spaced 90 degrees apart, which is referred to as a “cross-plane crank.” This allows for easier control of vibration. However, it also results in uneven firing pulses that cause “crowding” of the exhaust gases in the exhaust manifold, thus hindering their evacuation. A flat-plane crank evens out the pulses so that the exhaust can flow more freely. This allows the engine to breath better and intake more air at high rpms — thus making more power — as whatever goes in has to come out.

What it amounts to is that the Mustang GT’s 5.0-liter engine makes its peak power at 6500 rpm, while the GT350’s 5.2 makes it at 7500 rpm – and can rev all the way to 8250! That’s astronomical for a V8 this large, but the Ford folks at the press preview (held at the legendary Road America track in Wisconsin) not only allowed us to run it up to the rev limiter, but actually encouraged it! And at least under full throttle and higher revs (conditions that were met repeatedly), this engine makes a rorting howl that is pure music to the ears.

The ROARING Exhaust Note of the Roush Mustang Stage 3

But added power is only the first chapter of the GT350 story. Or perhaps we should say, “Stories.”

The Shelby comes in two flavors – GT350 and GT350R – each offering one or two option packages. While even the base GT350 is a track star, the GT350R is a more focused one, as it adds some performance equipment while deleting numerous features that are otherwise standard (and quite expected) in order to save weight. 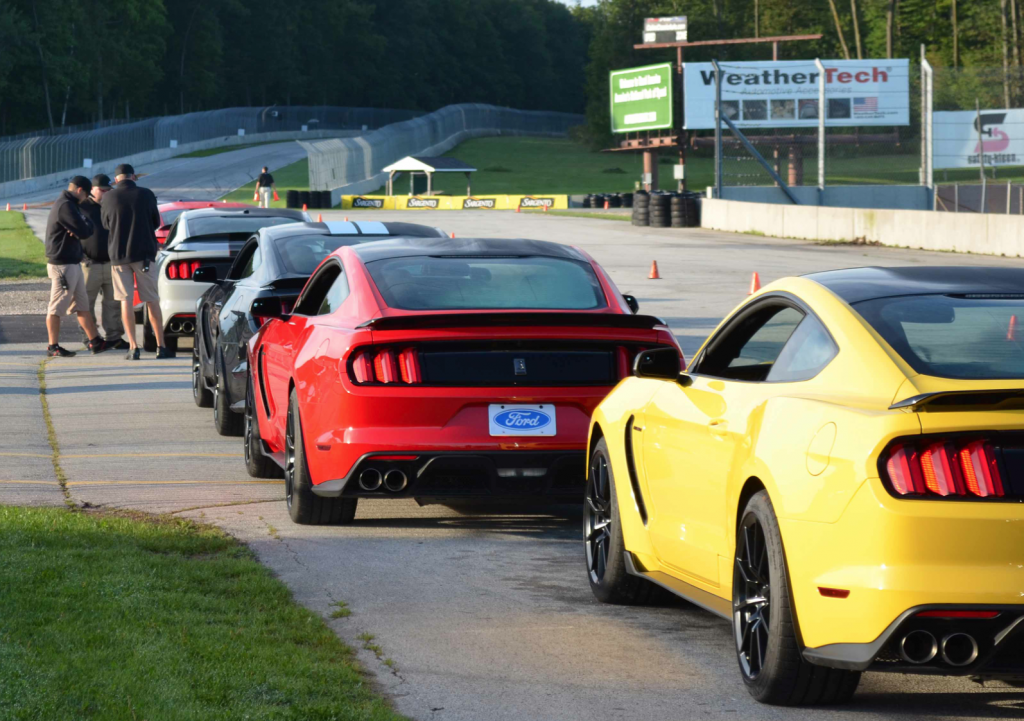 From the back, the GT350 (first three cars) can be identified by its lower rear spoiler and grey badge between the taillights, whereas the GT350R (grey car next to drivers) has a taller rear wing and a red badge. These cars are lined up ready for us to run laps around the famed Road America race course in Elkhart Lake, Wisconsin. Yep; tough day at the office.

The base GT350 comes fairly well equipped with a starting price of $49,995 including destination and gas-guzzler tax. An available Track Package adds MagneRide semi-active suspension with selectable drive modes and performance front springs, oil coolers for the engine, transmission, and differential, a front strut-tower brace, and a more prominent decklid spoiler. The Technology Package also includes the MagneRide suspension, but backs out the other Track Package items in favor of a voice-activated navigation system, 6-way-power heated and cooled front seats, SYNC 3 with MyFord Touch infotainment system with satellite radio, dual-zone climate control, and a universal garage-door opener. 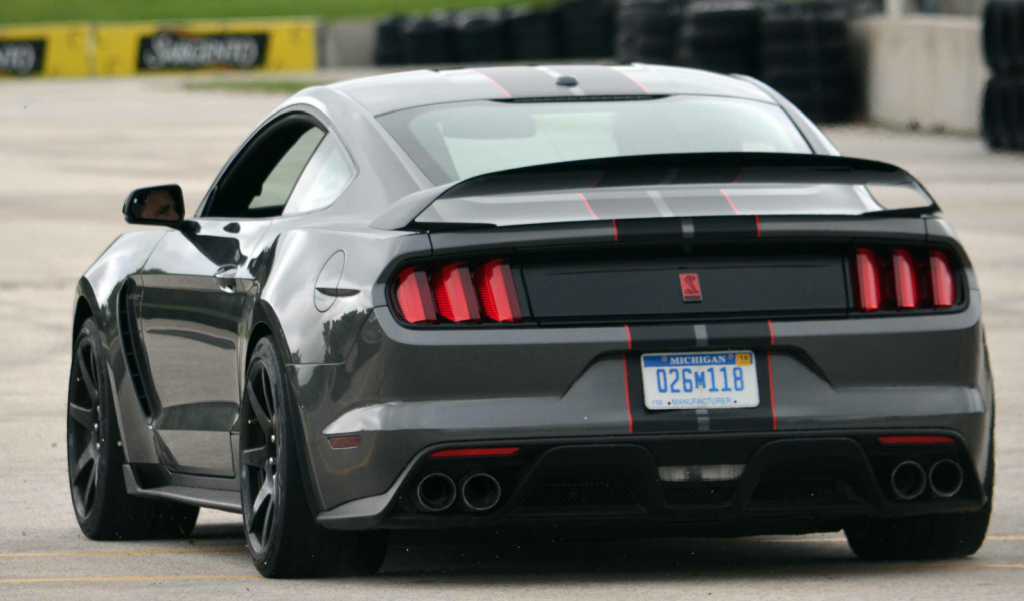 A better rear view of the GT350R — and the one most contenders are likely to see.

Then there’s the GT350R, which starts at $63,495. As implied previously, the base model is really a race car that can be driven to the track. It comes with carbon-fiber wheels that are not only wider, but also 15-pounds lighter than the standard GT350 rims, along with stickier tires, unique chassis tuning, a more prominent front spoiler, and a taller carbon-fiber rear wing that produces more downforce at speed. While the car is street-legal, you probably wouldn’t want it as a daily driver – or even a weekend one – as it lacks such expected niceties as air conditioning, a rear seat, an audio system, and even the otherwise-standard tire inflator and sealer kit. However, all those features except the rear seat can be added back in through the optional $3000 Electronics Package, which also includes a navigation system, SYNC 3 with MyFord Touch infotainment system, an 8-inch screen, and a universal garage-door opener. Something that’s not offered on any GT350 is an automatic transmission; it’s the stock 6-speed manual or nothing.

There’s a lot that goes into making a street vehicle truly “track worthy.” First is the brakes. While most performance enthusiasts are far more focused on “going” than “whoaing,” that perspective changes a bit when you’re approaching a 90-degree hairpin at triple-digit speeds. (A thrill Road America kindly allows drivers of even modestly powered cars to experience.)

None of the aforementioned performance goodies could be maximized without equally performance-oriented tires, and the Shelbys have ‘em. GT350s roll on Michelin Pilot Super Sports: 295/35ZR19s front, 305/35ZR19 rear. The GT350R gets wider Michelin Pilot Sport Cup 2s of 305/30ZR19 front, 315/30ZR19 rear. And boy, do they stick. One of the features these cars have is a g-meter for measuring cornering, braking, and acceleration forces, and one GT350R we drove had held the high cornering readings of 1.4 gs to the left, 1.44 gs to the right. I suspect these were established by one of the professional race drivers who accompanied us around the track and later gave us “hot laps,” where they take the wheel and do what we do – except about 20 percent faster. If accurate (and the pro driver who rode with me said they were), these are stunning readings for a street car.

Although we didn’t get a chance to take the Shelby GT350s on public roads, a lot can be learned by herding a vehicle around a track — particularly when a pro is at the wheel. My own laps revealed a car that accelerates with ferocity while emitting a gloriously raspy exhaust note. The engine also has an extremely broad power band (one merit of the flat-plane crank and a big advantage when racing, as you don’t have to shift as often) that allows running nearly the entire course in third gear, which in turn allows one to concentrate more on driving.

Where I got crossed up was in braking. Even coming into corners at full gallop — which sometimes meant triple-digit velocities — I nailed the brakes and … slowed way too quickly. In fact, I often had to accelerate again just to enter corners at a challenging speed. And at that “challenging speed,” the cars remained incredibly stable and easy to control, the only barrier to going faster being my own, finely honed sense of preservation — something I later discovered our pro driver clearly lacked.

There is a certain violence that ensues when a car of this capability is taken to its limits. Perhaps this is why we were not only required to wear a helmet, but also a harness with straps secured to the helmet that kept our heads from moving very far in any direction. At first I thought this was overkill; I’ve never had to do this before at any of the many track events I’ve attended. But when a pro driver takes it upon himself to enliven his otherwise boring existence by scaring the bejesus out of unsuspecting journalists, it quickly becomes an appreciated idea. As would have a similar “strap” secured to my stomach, which was happy our two hot laps didn’t turn into three. Holy smokes does this thing have grip.

Long an automotive legend, Carroll Shelby died in 2012 at the age of 89. Yet his name – and his influence – lives on. Cars carrying his famous Cobra badge have always been something special, and there’s little doubt he’d be proud of this latest recipient that not only carries his name, but also pays homage to one of his greatest automotive successes.