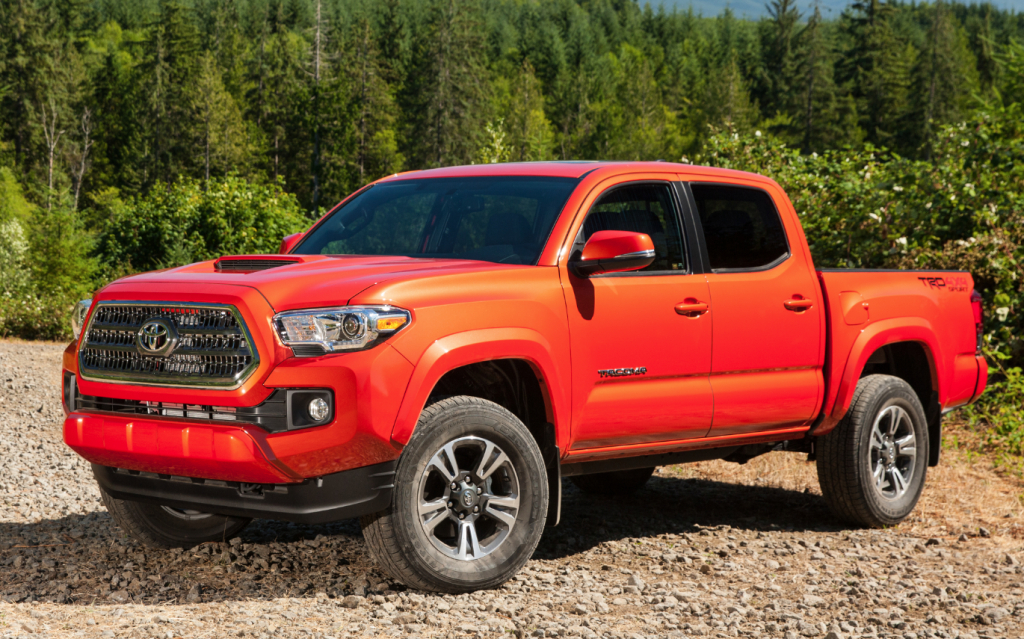 Toyota redesigns its popular Tacoma compact pickup for 2016, giving it a fresh face and adding numerous new features — including a stronger and smoother V6 engine.

After a long dry spell, action in the compact-pickup segment has finally started to … well … pick up.

Peaking in 2010 with 11 entries, slow sales forced the compact-pickup class to implode, dropping to just six members for 2012. It eroded further when GM axed the Chevrolet Colorado and GMC Canyon after that year, which also saw Suzuki fold its U.S. operations, removing the slow-selling Equator from contention. That left just the Honda Ridgeline, Nissan Frontier, and Toyota Tacoma for 2013. Then Honda pulled the plug on the Ridgeline in the summer of 2014, so for a brief time, Frontier and Tacoma had the market to themselves.

But not for long. GM brought back the Colorado and Canyon in redesigned form for 2015, and the competition began heating up. Now Toyota has updated the sales-leading Tacoma, and Honda is set to debut a redesigned Ridgeline in the first half of next year. So it seems compact pickups are again finding their groove.

Except they’re really not “compact” pickups any more. The Colorado and Canyon returned in significantly larger form, and the Tacoma – already bigger than when it debuted – has grown a bit more for 2016.

And some feel that’s been part of the problem. As compact pickups grew, they got closer to full-size trucks in size and price. That left many buyers thinking, “For a little bit more money I can get a lot more truck,” and they’d pull the trigger on the full-size – a class that has seen significant advancements over the past few years.

But with this new crop of compact pickups, the segment is catching up. Luxury and high-tech features have been added (though they’re still not on par with cars or SUVs), and refinement has received as much attention as ruggedness.

That’s certainly the case with the redesigned 2016 Tacoma, which offers more power, better fuel economy, a number of new features, and a higher level of refinement. 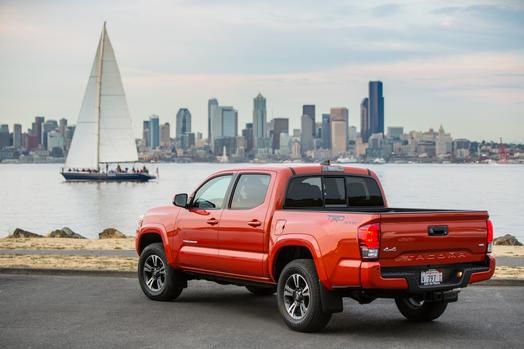 Among pickups, crew cabs (called “Double Cab” by Toyota) make up the vast majority of sales. New for all 2016 Tacomas is a damped tailgate that lowers itself slowly when released, and newly optional is a 3-piece hard tonneau cover for the bed.

One thing that hasn’t changed is body-style offerings. Tacoma dropped its regular-cab models after 2014, leaving Access Cab (extended cab) and Double Cab (crew cab) versions. Those return for 2016. Both are about four inches longer than last year, primarily due to greater front overhang that resulted from styling changes made to accommodate pedestrian-protection standards. Access Cab comes with a 6-foot bed, Double Cab with a choice of 5- or 6-foot bed. All beds have a composite inner lining with rails holding adjustable tie-down cleats, along with a new damped tailgate that “eases” itself down. There’s also a newly available 3-piece hard tonneau cover and 120-volt/400 watt power outlet.

EPA estimates have generally improved a bit, though the 2WD 4-cylinder automatic drops by one mpg on the highway to 19 city/23 highway. All other combinations are up, with the biggest improvements coming on V6-powered models. For instance, the popular 4WD V6 automatic is now rated at 18/23, up from 16/21 last year. 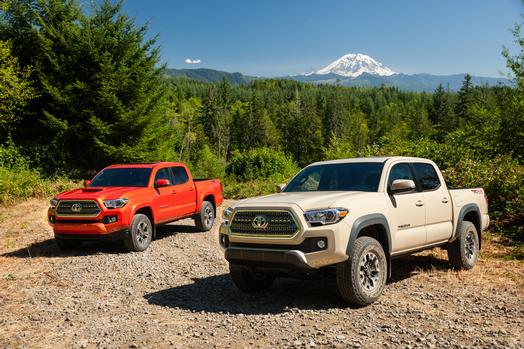 The off-road-oriented TRD model has long been the most popular Tacoma, and for 2016 there are two versions. The TRD Sport (background, shown in new “Inferno” orange) is the only model to come with a hood scoop, while the TRD Off Road (foreground, shown in new “Quicksand” tan) offers equipment specifically tailored for off-road use. All models get distinct grilles.

Model names have also been shuffled for 2016. While the 2015 came in three trim levels – Base, PreRunner, and TRD Pro – the 2016 comes in five: SR, SR5, TRD Sport, TRD Off Road, and Limited, the last adding previously unheard-of luxury to the line. (Credit similarly oriented GM models for expanding the Tacoma’s reach into the world of “ritzy.”)

If you happened to have shopped the 2015 Tacoma and decided to wait until the 2016 arrived to compare the two, one thing you may notice is a price increase. Last year, the base model started at $20,965, not including destination; this year, the price of entry has jumped to $23,300, an increase of about $2300. However, a higher level of standard equipment – including a newly standard 6-speed automatic transmission (in place of a 5-speed manual) and rearview camera – helps balance the equation. Still, that puts Tacoma at a disadvantage for those who are focusing on the price of entry (such as commercial users), as the 2016 Chevrolet Colorado starts at $20,100, and the 2015 Nissan Frontier (still on sale) starts at $17,990.

New features offered for 2016 include dual-zone automatic climate control, leather upholstery, keyless access and starting, power tilt-and-slide moonroof, Qi wireless charging for cell phones, and greater capability for the touchscreen audio system (more on that in a moment). On the safety front, a blind-spot monitor and rear cross-traffic alert are newly available. 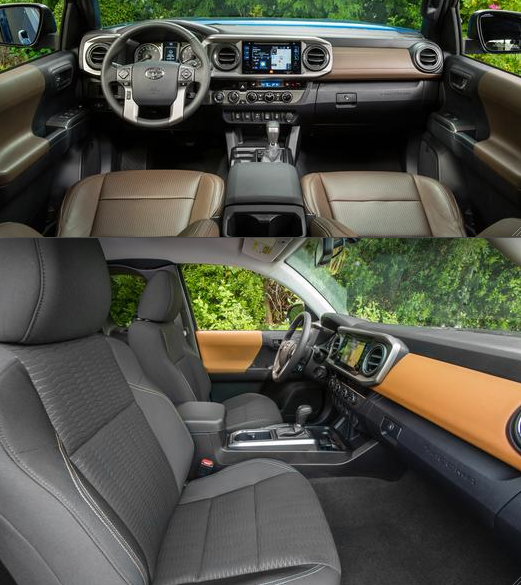 Added to the upper end of the model roster for 2016 is the Limited (top), a luxury-oriented trim level offering tan-colored leather upholstery, dash trim, and door trim. Some other models can get contrasting-color dash and door trim (bottom).

Toyota says roughly 45 percent of Tacoma buyers take their trucks off-road, and those customers will find even more capability in the 2016 version. The model specifically aimed in that direction is the aptly named TRD Off Road, which offers a Multi-Terrain Select system that regulates wheel spin, throttle, and brake applications to match the differing conditions of loose rock, mud, and sand. Also available are a locking rear differential, hill-start assist, and Crawl Control, the last of which allows you to set a speed from 1-5 mph, and the vehicle will apply the gas or brakes to keep it at that speed; all the driver does is steer.

From the outside, the 2016 is distinguished by a more prominent front end, with grilles that are distinct between the various trim levels. New colors are offered, including Quicksand (tan), Inferno (orange), and Blazing Blue Pearl, and wheel sizes range from 16 to 18 inches.

Inside, the dash design is new, as are some contrasting color combinations such as Black with tan, red, or orange trim (depending on model), and the Limited can be had with hickory-colored leather upholstery.

However, the only powertrain combination we were able to test was the 4×4 with V6 and automatic transmission.

That new V6 engine is both smoother and quieter than the one it replaces, and it provides fairly strong acceleration. And the transmission kicks down fairly quickly for more passing power.

The TRD Sport we drove is the only model in the lineup with a hood scoop, one of its differentiating features. It rode reasonably well over on-road bumps, but still exhibited the chassis reverberation after clearing bumps that is typical of pickups. Handling probably isn’t going to disappoint anyone familiar with driving trucks. Toyota said improved sound insulation helped provide a quieter ride, and indeed, it seemed more serene inside at speed than is usual for a pickup. 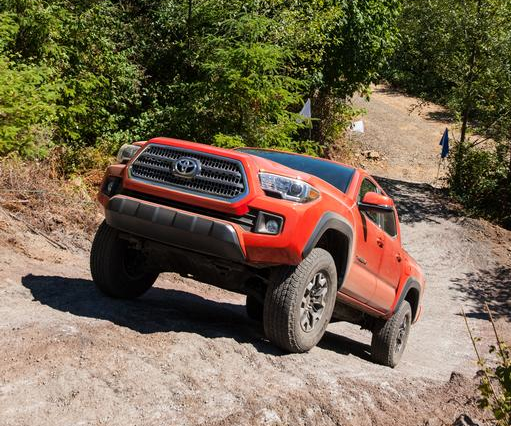 Those who venture off road may appreciate Tacoma’s newly available Crawl Control, which maintains a set speed regardless of grade or conditions; all the driver has to do is steer.

We briefly tested a TRD Off Road on a rather severe off-road course. Most impressive was the Crawl Control. It’s just a little unnerving to be climbing a steep hill – or going down it – with your feet completely off the pedals, but in both cases, the Crawl Control worked exceptionally well. It’s tricky on steep uphill grades to modulate the throttle just right so that you maintain forward momentum without spinning the tires and losing traction by apply too much power, so this is a credible advancement for those who venture off road.

Inside, visibility is good to the front and rear corners thanks to fairly thin roof pillars, but not so good to the sides due to thicker ones. The dash top is hard plastic, but there are padded surfaces across the dash face and door tops that can be in contrasting colors, depending on model. Ample storage is provided by a large 2-tiered glovebox, a left-side dash bin, a big forward console bin sitting under Aux, USB, and 12-volt jacks, a moderate-size console bin with another 12-volt jack, two cupholders, and small map pockets with cupholders in the doors. 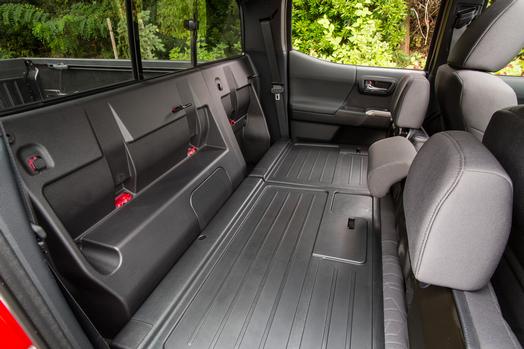 In Double Cabs, the rear seat back can be folded to create a flat load surface. Average-size adults can fit comfortably behind fairly tall front seaters. That’s not the case in the shorter Access Cab, which has a bolt-upright seat back and very limited legroom.

Headroom is fine front and rear, but the front seats might not go back far enough to make really tall drivers comfortable. Max out the front-seat travel, and an average-size adult can squeeze in behind in the Double (crew) Cab, which has a three-passenger bench in back and conventional front-hinged doors. The Access (extended) Cab has rear-hinged rear doors, which can be inconvenient in parking lots. Plus, the seat only holds two passengers – and they won’t be too comfortable, as the seat has a bolt-upright back rest and there’s very little legroom; in fact, you really can’t fit adults back there unless the front seats are rather far forward. This is probably one reason crew cabs have garnered roughly 80 percent of the compact-pickup market.

Speaking of market share, the Tacoma has typically accounted for about half of all the compact pickups sold, an impressive feat. And this new version offers a broader model lineup along with a wider selection of features, a combination that is likely to keep it popular despite the current and upcoming competition.

GMC Canyon: Not Just a Gussied Up Colorado