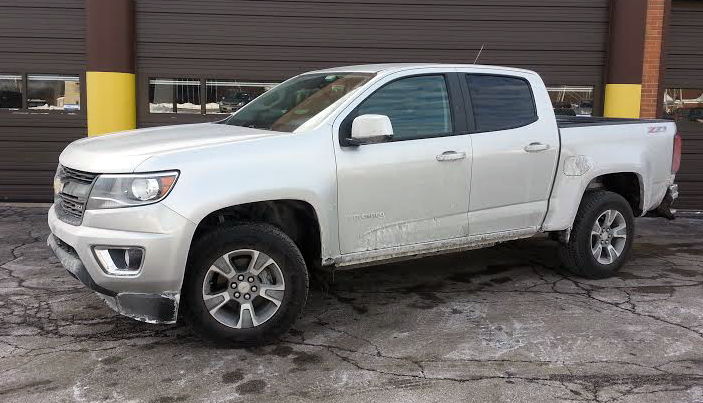 The not so good: Cabin shy on soft-touch, high-grade materials

How’s this for irony? In the compact pickup class, the field is smaller but the trucks are bigger.

There are just 4 nameplates left in what was once a pretty hot little market niche. Two of them—the Chevrolet Colorado and related GMC Canyon—are all-new for 2015, which made them shoo-ins as Consumer Guide® Best Buy choices. They’re larger than the trucks they replace, so calling Colorado and Canyon compacts is something of an exercise in semantics. Still, even if the competition in the class were more robust, they would be hard to top as best in show. 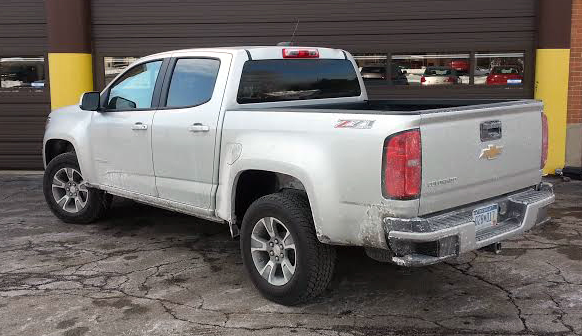 Our test Colorado is shown here covered in road salt, the result of heavy snow that arrived during our test drive. Publisher Tom reports the Colorado performing capably in deep snow and over slick surfaces.

For one thing, being General Motors vehicles, they now feature OnStar assistance service that has been upgraded to 4G LTE, and there is built-in Wi-Fi hotspot capability—both standard. A rear-vision camera is standard, too. At the business end, the cargo beds have picked up a few tricks from their bigger Chevy Silverado and GMC Sierra brothers–like steps in the bumper corners, available movable cargo tie-down rings, and an EZ Lift-and-Lower tailgate. The EZ tailgate—standard on top-line Colorado Z71s like the short-bed crew cab that CG test drove—lets the gate settle gently to the open position instead of clunking to a hard stop like a conventional tailgate left to the tender mercies of gravity. That ought to save a little wear and tear on the tailgate and its attaching hardware.

A few Colorado models come with a 2.5-liter 4-cylinder engine and 6-speed manual transmission, but most are powered by a 3.6-liter dohc V6. The 305-horsepower V6 is linked to a 6-speed automatic transmission. It was this powerteam that was installed in the test truck. 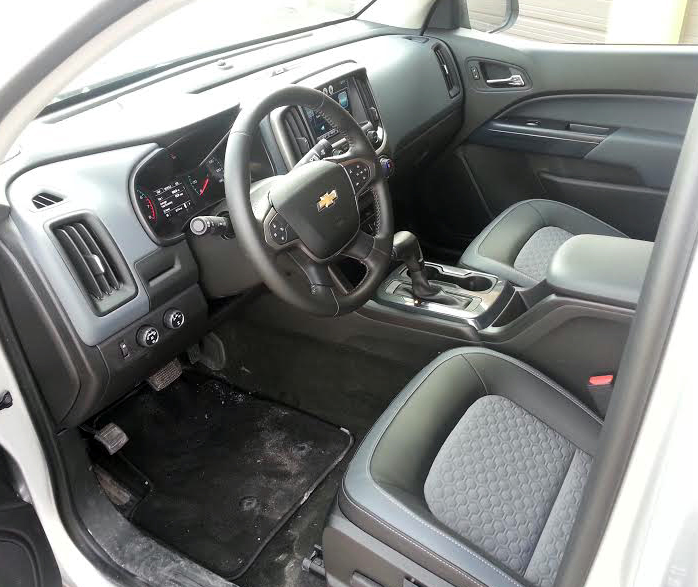 Colorado’s cabin is functional, but lacks the soft-touch surfaces we expected from an all-new model.

Throttle response is “measured” off the line but there’s a sense of massing torque, which hits its peak of 269 lb-ft at 4000 rpm. Impossible-to-ignore engine noise builds right from the start under acceleration, but quiets down upon settling into a groove. In this driver’s experience, the transmission generally worked without calling much attention to itself, but he was able to cross it up by going from rising on-ramp speed to a sudden order for lots more acceleration. The right gear was in there somewhere and, by golly, the Hydra-Matic 6L50 was going to find it. In a trip of 323.5 miles, 63 percent of it under city driving conditions, this tester averaged an acceptable 18.25 mpg in the 4-wheel-drive Colorado, which has EPA-estimate mileage ratings of 17 city, 24 highway, and 20 combined.

Whether built as a 2- or 4-wheel-drive truck, the Z71 features an off-road suspension package with standard 17-inch all-terrain tires. On road, ride is decidedly firm (you know you’re driving a truck) but surface imperfections don’t seem to inordinately jolt or shock it. The solid-axle/leaf-spring rear end felt well planted.

As for passenger room, the headliner is recessed above both rows of seats to maximize head room, which is plentiful in both places. There’s ample stretch-out room in front. Adults will find tighter but still acceptable leg room in back. Make that “for 2.” A middle passenger might find him or herself bumping a knee into each seat back, so that is for quick trips only. When not required by passengers, rear head rests fold at the press of a button to improve driver vision.

Personal storage consists of a large glove box, decently sized covered console cubby, a small opening at the front of the console under inputs for electronics and digital media, 2 open cup holders, and small two-tiered door pockets with a bottle holder built into the lower one. Rear riders have pouches in the back of the seats, very small door pockets with bottle holders, and a pull-down center arm rest with 2 cup holders. Crew-cab rear seats fold for added interior capacity. Loading or unloading the cargo bed may take some extra muscle in 4-wheelers because load height is a little elevated. 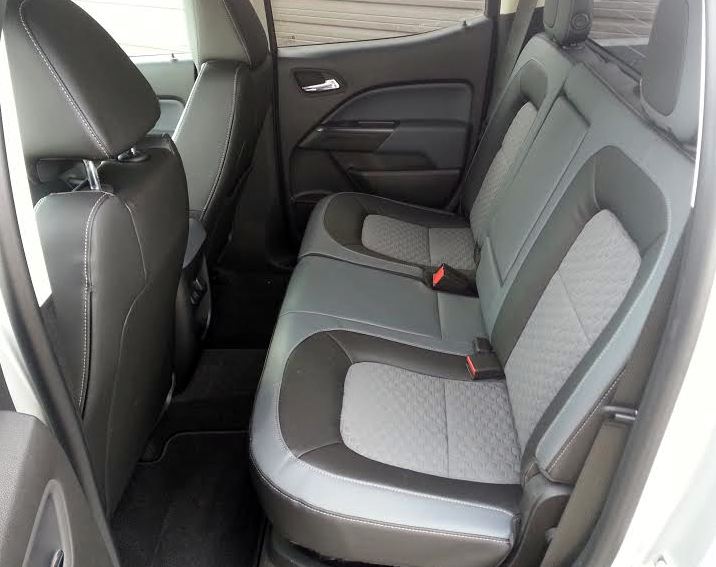 Even the high-end Z71 has a minimum of soft-touch material in the cabin, but a leather-wrapped steering wheel is a notable exception. Cloth and leatherette seats have a raised pattern that’s visually interesting but a little stiff to sit on. (Seats do offer pleasing support, however.)

Big speedometer and tachometer dials stare the driver right in the face but smaller fuel and temperature gauges are walled off in a space at the top of the instrument cluster and aren’t as easy to read. Four-wheel-drive Colorados have a rotary dial for shift-on-the fly driveline selection but it is low on the dash to the left of the steering column, and difficult to see. The Chevrolet MyLink infotainment system—standard beginning at the LT level that’s a step down from the Z71—registers on an 8-inch color touchscreen in the dash. It’s fairly easy to use, if sometimes a hair slow in reacting to things like changes of radio station. Separate climate controls reside below the screen and feature rotary dials for fan speed and temperature but buttons for other functions.

CG’s test 4-wheel-drive Z71 had the shorter 5-foot-2 cargo bed (a 6-foot-2 bed is available, too). Starting price for this configuration is $34,115 and includes standard gear like an automatic locking rear differential, transfer-case shield, hill-descent control, front recovery hooks, projector-beam headlamps, fog lamps, cast-aluminum wheels, automatic air conditioning, remote start, 4-way power driver- and front-passenger seat adjusters with power lumbar control, and electric rear-window defogger. The final price with delivery crept up to $36,710 with an audio-system upgrade, navigation, a trailering package, and spray-on bedliner. That’s not such a compact price, but you don’t need to spend that much to still have a useful and utterly modern “small” pickup.

My time in the Colorado brought down our average observed fuel economy a bit, this due to a pair of commutes to the office hindered by serious accumulations of snow. Our test Colorado proved to be an ace in the snow, conquering large drifts and slick surfaces with easy confidence. I did note some driveline clunkiness in the deepest snow I traversed, a minor annoyance I suspect came as a result of the locking rear axle going about its business.