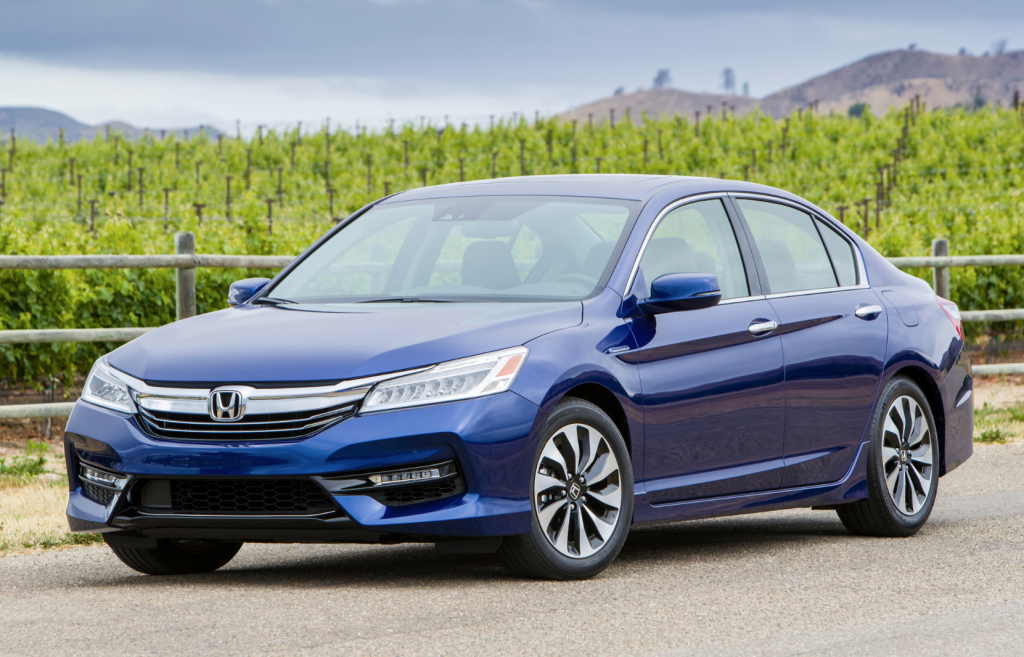 Already on sale, Honda’s Accord Hybrid returns for 2017 with more power, better fuel economy, and a number of new features. Prices start at less than $30,500.

Hybrids are a hard sell these days. With gas prices hovering near $2 a gallon, fuel economy isn’t the draw it was when they were closing in on $5.

But gas still isn’t free, and fuel cost alone isn’t the sole reason to buy a hybrid. When you can not only significantly reduce your cost per mile but drastically increase your range between fill-ups, that’s a plus. So is the fact that your brakes usually last far longer, a maintenance savings. And then, of course, there’s that whole “Green” thing. So hybrids still make a lot of sense, particularly when the car itself is pretty darn good, as is the case with Honda’s Accord.

After skipping the 2016 model year, the Honda Accord Hybrid returns for 2017 with updates that give it better fuel economy, more power, and a host of new features.

When introduced for 2014, the Accord Hybrid topped the midsize-sedan segment in fuel economy with a 50 city/45 highway/47 combined EPA rating. Despite the fact that a revised EPA rating system for the 2017 model year has resulted in lower figures for many vehicles, the new Accord Hybrid beats most of its previous marks – and remains Best in Class – with a 49/47/48 rating. 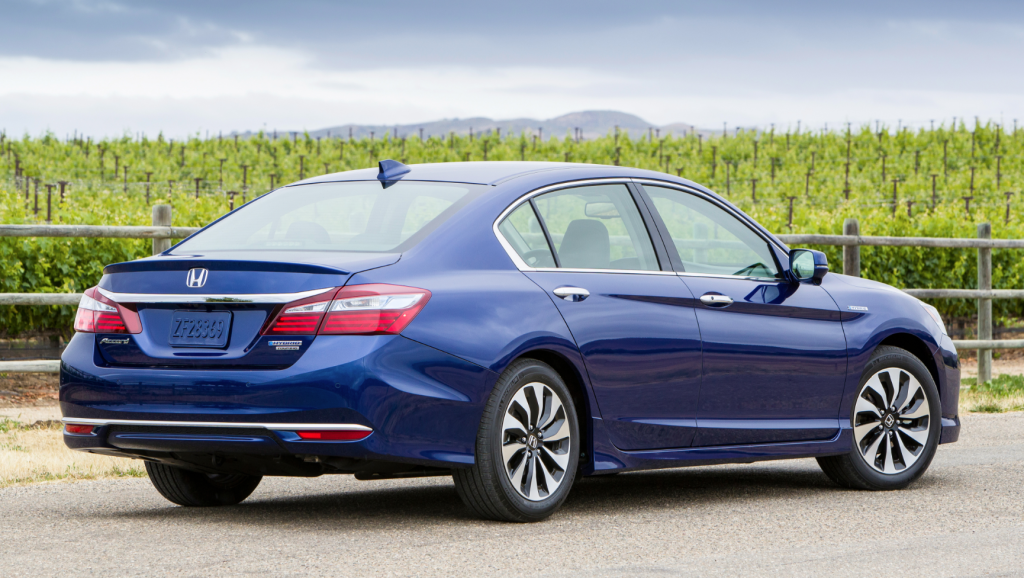 Visibility is a strong point for any Accord, but the Hybrid adds the appeal of a 49 city/47 highway/48 combined EPA mpg rating.

Also Best in Class is the Hybrid’s 212 horsepower. It comes courtesy of a 2.0-liter four-cylinder engine mated with an electric motor, with the engine also turning a generator that recharges the 1.3-kWh lithium-ion battery mounted behind the rear seat.

Under most circumstances, the electric motor does all the work. Whether it gets its power solely from the battery or from a combination of the battery and the engine-driven generator depends on how much is asked of it.

In a normal city driving cycle, the engine/generator will kick on under acceleration (it usually isn’t running when the car is stopped), but will shut off as soon as the car reaches cruising speed, at which point the motor is getting its electricity only from the battery. Under this light load, the battery can power the car for quite a ways without the engine/generator having to kick in to help, which is largely what makes hybrids so frugal in city driving. When the car is brought to a stop, the car’s momentum is used to turn the generator (through the wheels), which helps recharge the battery. The engine/generator can also kick in periodically to recharge the battery if it gets low. According to Honda, the electric motor can power the car off the battery alone at speeds up to about 60 mph. If you nail the gas at any point, both the engine and electric motor will pitch in to drive the wheels with their combined 212 horsepower.

At sustained highway speeds, the engine drives the wheels directly. This is because there are slight parasitic losses through the motor and generator, so it’s more efficient to use just the engine. If you hit the gas to pass another car, for instance, the electric motor will kick in to help.

One way to illustrate the efficiency of the Accord Hybrid’s powertrain is to compare it to that of its regular gas-powered sibling. Although a V6 engine is offered on higher trim levels, most Accords are powered by a 185-horsepower 2.4-liter 4-cylinder engine and CVT automatic transmission, a combination that – for 2017 – earns it a 27/36/30 EPA rating (down 1 mpg in the Highway and Combined ratings from 2016). If you compare their Combined ratings, that gives the Hybrid a solid 18-mpg advantage, which jumps to 22 mpg in all-city driving. Also using the Combined numbers, the Hybrid’s range on its 15.8-gallon fuel tank is a theoretical 758 miles, whereas the gas model’s 17.2-gallon tank will run dry after “only” 516 miles. 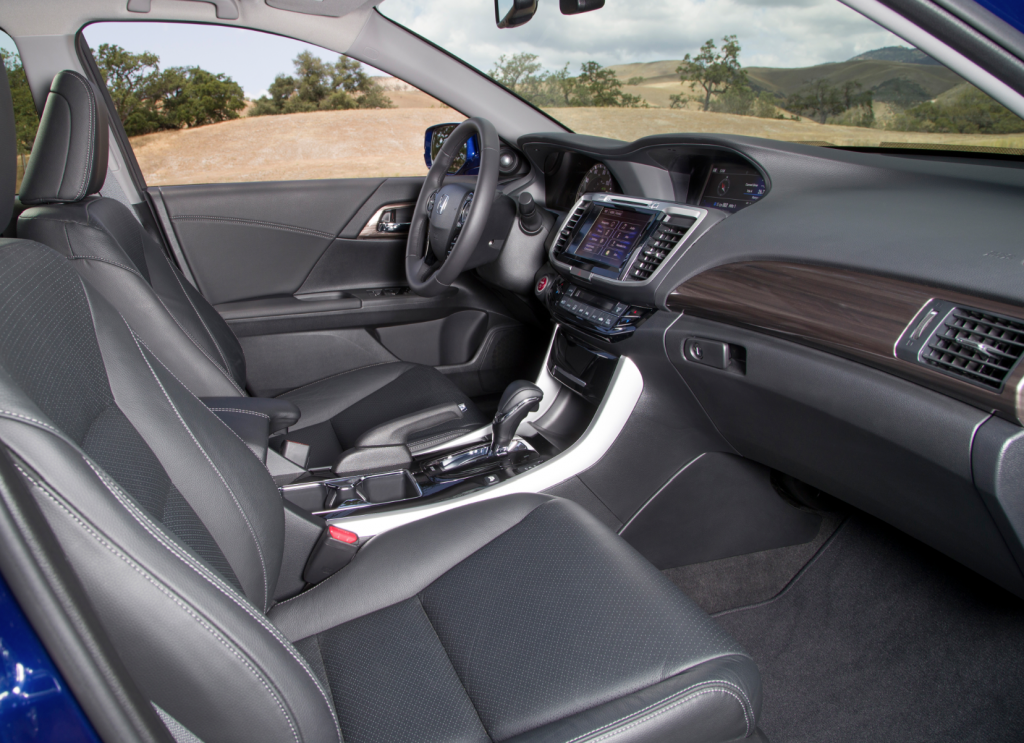 The Accord Hybrid is offered in three trim levels. The base model starts at $30,440 including the $835 destination charge, and it comes quite well equipped. Newly standard for 2017 is HondaSensing, a suite of high-tech safety and convenience features that include forward-collision warning and mitigation, lane-departure warning and mitigation, lane-keep assist, and adaptive cruise control.

Added on the $33,740 EX-L are leather upholstery, heated front seats, power moonroof, satellite radio, an auto-dimming rearview mirror, and Apple CarPlay/Android Auto. This is likely to be the most popular model.

As with most hybrids, the Accord’s driving experience differs a bit from that of “regular” cars. Since the engine is usually shut off at idle, there’s virtually no noise when stopped – unless the fan or radio is on. Under anything but very slow acceleration, the engine kicks in shortly after take-off, marking the occasion with a muted but noticeable constant-speed roar. When you lift off the throttle after attaining your desired speed, the engine often shuts off again, giving you very quiet cruising. After that, it will start up only when the battery gets low or you ask for a certain degree of acceleration.

It’s when you slow to a stop that an important element of a hybrid comes into play. In a normal gas-powered car, you lift off the gas and apply the brake, which means you’re scrubbing off speed by physically clamping brake pads onto the spinning (with the wheels) brake rotors. This not only wears out the brakes, but sacrifices the momentum you spent gas money building up. 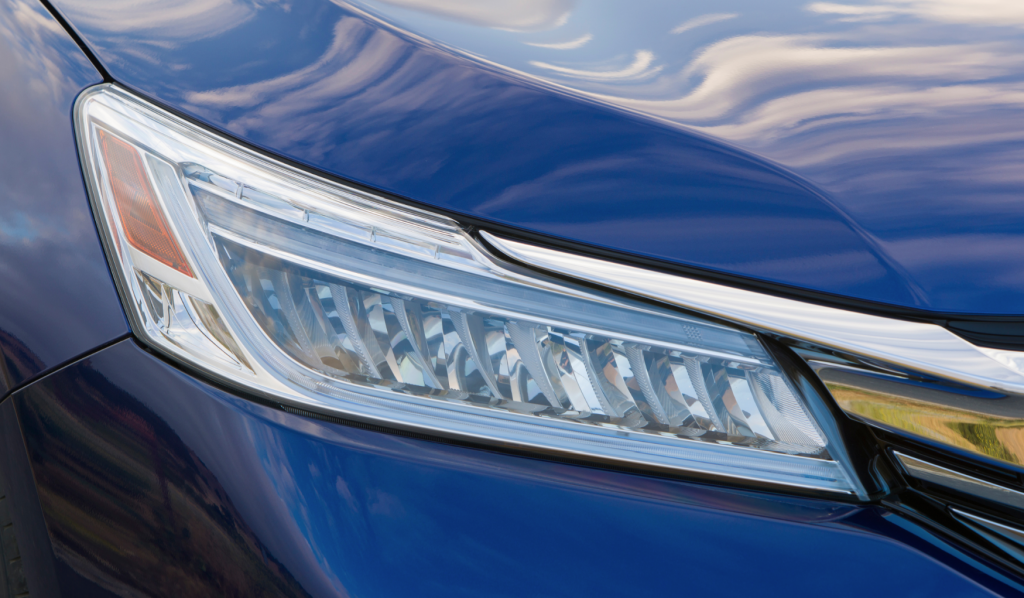 The Hybrid Touring is distinguished with blue-edged headlight accents …

In a hybrid, touching the brake pedal doesn’t apply pads to rotors. Instead, it activates the generator, which is hard to turn when it’s producing electricity – which it’s doing to help recharge the battery as you decelerate – and that effort is what slows the car down. Until you come almost to a stop – or press really hard on the brake pedal – the brakes themselves don’t come into play, and thus don’t wear.

At highway speeds, the engine is generally running, but will sometimes shut off if you’re driving below about 60 mph or going downhill.

Nail the gas from a stop, and the Accord Hybrid moves off (not really “jumps” off) the line, but speed builds quickly and seamlessly. Do the same from speed, and there’s only a slight delay before decent power arrives. We found that if you don’t “nail” the throttle but rather just dip into it – as would most commonly be the case – the electric motor provides an instant nudge followed shortly by a stronger one when the gas engine kicks in.

The Accord has always leaned toward the athletic side of the midsize-sedan segment when it comes to its ride/handling balance, and that seems to remain the case with the Hybrid. Our California drive route didn’t offer much in the way of bumps, but it did include lots of twisties. In these, the Accord Hybrid felt confident and planted, if not quite sporty. 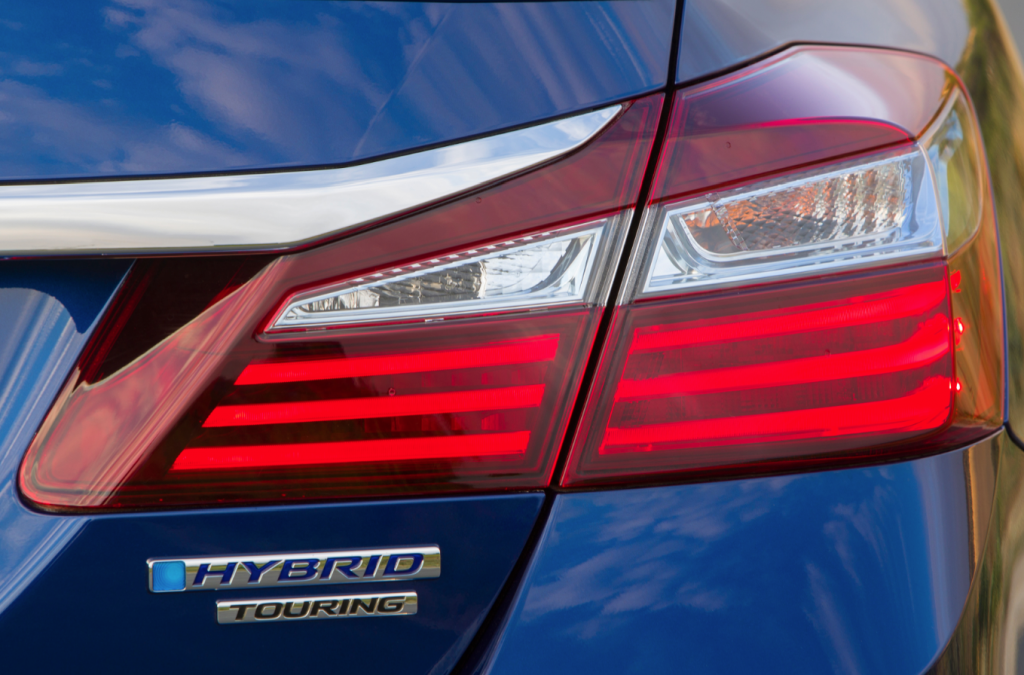 … and, of course, Hybrid badging.

A notable strength of all Accords is their visibility. All of the roof pillars are relatively thin – allowing for a great view out – and the Hybrid’s standard rearview camera provides the choice of a normal (roughly 140-degree) view, a 180-degree wide-angle image (so you can see both ways down a parking-lot aisle when backing out of a space) or a top-down view of the bumper. There’s also Honda’s LaneWatch right-side camera, which turns on when you activate the right turn signal.

Interior materials are about par for the class, with padding on the dash top, door tops, and armrests augmented by dark wood and piano black trim with matte-silver and chrome accents. Our test vehicle had an all-black interior, but two-tones in black/tan and black/grey are available.

Interior storage is perhaps better than the class norm. A decent-size glovebox is joined by a covered upper console bin with USB port (great place for your cell phone), a large open bin beneath it with 12-volt socket, two open cupholders, a small console box with USB and 12-volt jacks, and small map pockets with cupholders in the doors.

The audio system in upper-level models has no buttons or knobs, but gets smartphone-style graphics.

Not quite as good is the control layout. The audio system in the top-line Touring we drove has no knobs or buttons; instead, volume is adjusted with a virtual slider control, and tuning is done through virtual buttons on the screen. The former, in particular, is awkward to use while driving, though redundant steering-wheel controls help. We’re told the mid-line EX-L is the same, but that the base model’s audio system has conventional knobs.

Also a bit tedious to use are the climate controls. Although you’re not going to have to adjust the automatic climate system very often, if you do, you’ll be repeatedly tapping “repetitive-step” pushbuttons for fan speed, temperature, and mode, which we find less handy than simply turning a knob.

There’s good headroom up front, but really tall drivers might find legroom a bit tight. All Hybrids come with a 10-way power driver seat (including tilt cushion and adjustable lumbar support), and EX-L and Touring add driver-seat memory. In back, there’s sufficient headroom for those up to about 6-feet tall, and there’s ample legroom, even with the seat ahead pushed all the way back.

One demerit against virtually all hybrid sedans is reduced trunk space, and the Accord Hybrid is no exception. Having the battery positioned upright behind the rear seat means the trunk doesn’t go very far forward, and it also prevents the rear seat back from folding to enlarge the space. However, a smaller, more efficient battery in the 2017 model provides a nearly 1-cubic-foot space advantage over the previous model, with the total now being 13.5 cubic feet (vs. the gas model’s 15.8). The trunk is wide at the rear and there’s lots of “hidden” space under the floor, partly because an inflator kit takes the place of a spare tire. 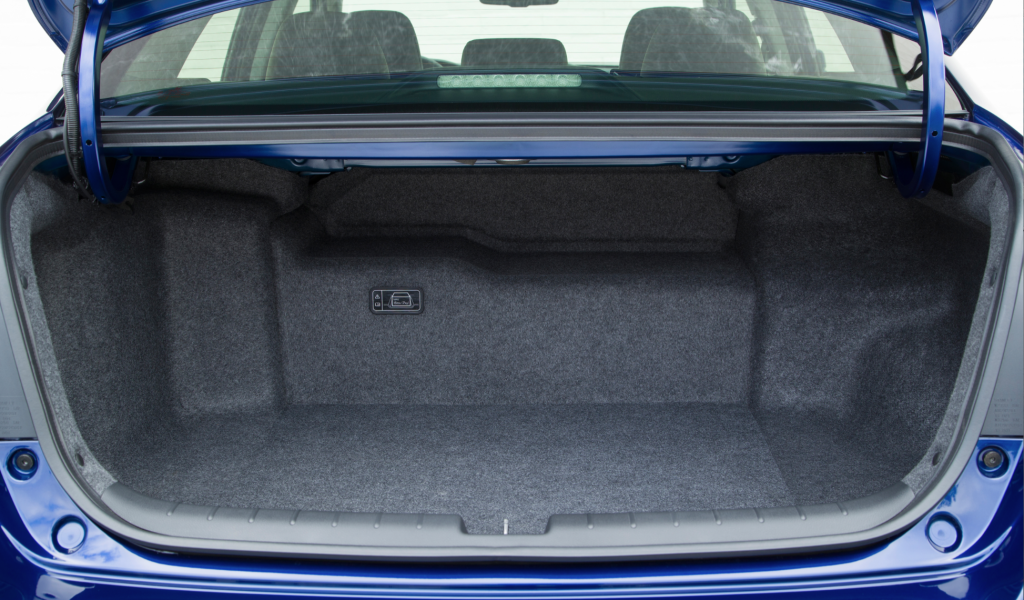 It’s smaller than in the “regular” Accord, and the seat back doesn’t fold down (the battery fills the space that would otherwise be the opening), but the Hybrid’s trunk is still of usable size, and there’s added storage space under the floor.

One cost calculation often used to justify a hybrid is how long it takes the savings in fuel to pay back its higher initial price. It’s difficult to directly compare gas and hybrid versions of the Accord because equipment levels vary a bit, but let’s look at EX-L trim levels of both. If you add HondaSensing to the gas EX-L – which you should – it includes a navigation system that isn’t on the Hybrid EX-L, but the cost difference is otherwise $2085. If gas is selling for $2.20 a gallon and you drive 10,000 miles per year in a mix of city and highway driving, you’ll spend about $733/year to fill the gas model’s tank, $458 to fill the Hybrid’s, meaning the latter saves $275 per year. If you divide the Hybrid’s $2085 higher price by the fuel savings, it takes about 7 ½ years to pay back the added cost. Note that the payback time will be less if fuel prices go up, and we’re not factoring in the savings in brake replacement – or the added convenience of going 240 more miles between fill-ups. And if you do primarily city driving – where the Hybrid is at its best and the gas model at its worst – the payback time drops to a little more than 5 ½ years.

So even with gas prices at historic lows, the Accord Hybrid can pay off its added cost in a reasonable amount of time. That period will shorten considerably if gas prices (inevitably) go up, and it doesn’t take into account the savings in brake replacement (particularly in all-city driving) and the convenience of fewer fill-ups. Or that whole “Green” thing ….