Even in this line of work, it’s not often we get to drive something truly revolutionary.

Although the Honda Clarity Fuel Cell is about as futuristic as cars come nowadays, the concept itself isn’t really all that new – at least not to Honda. The company built experimental fuel-cell cars as far back as the late 1990s, then introduced the small, hatchback-shaped 2003 FCX as its first fuel-cell vehicle for commercial use. A major milestone was cleared a couple of years later when a similar FCX became the first fuel-cell vehicle to be leased to consumers (albeit in very small numbers). 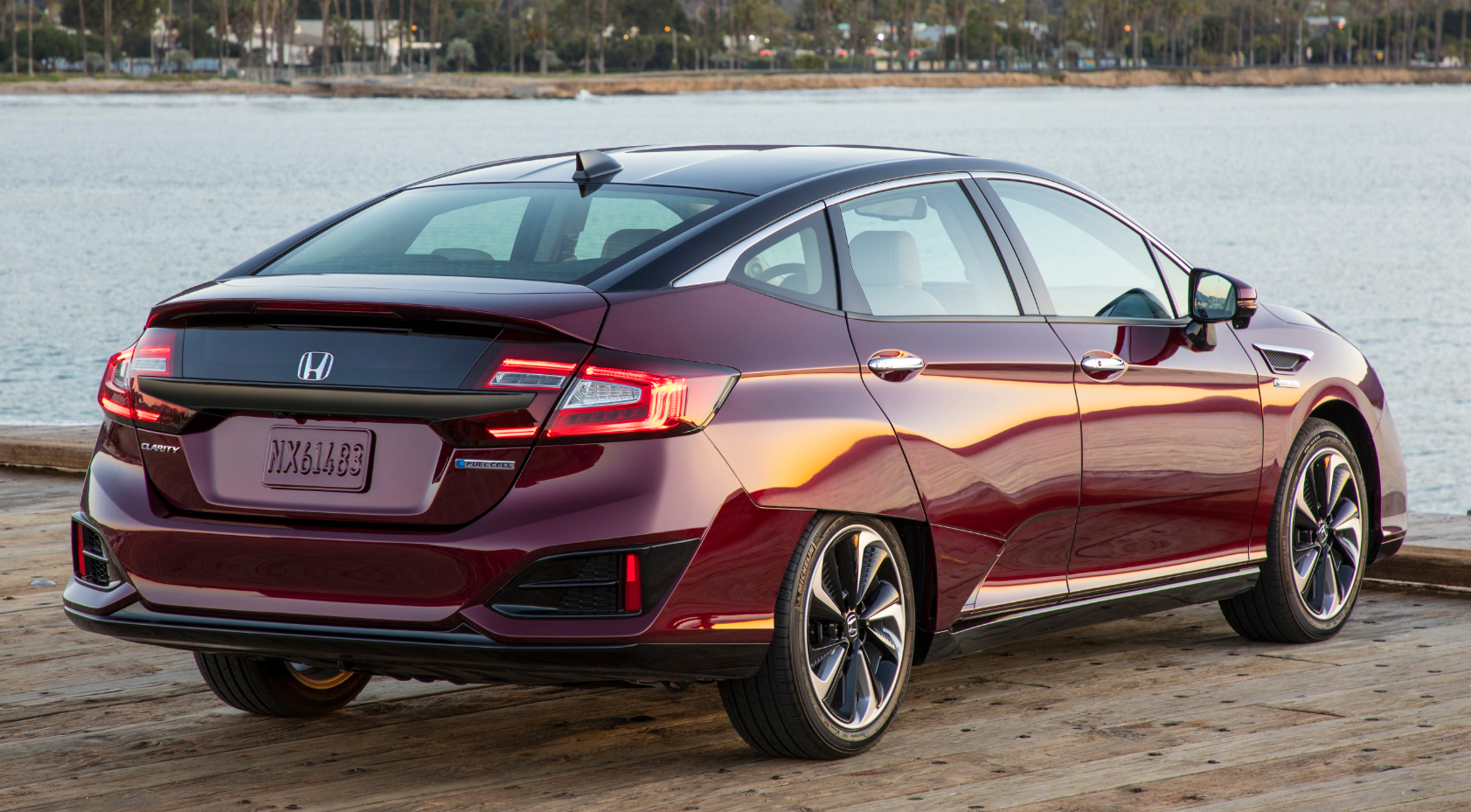 It’s only available for lease in California right now — largely because that’s the only state currently hosting public hydrogen fueling stations — but Honda’s Clarity Fuel Cell is expected to expand its reach into some northeastern states within a couple of years. And by the end of this year, Honda is due to offer pure electric and plug-in hybrid versions of the Clarity.

With the FCX Clarity of 2008, the company went “mainstream,” producing a 4-passenger midsize sedan that could easily suffice as a family vehicle – as long as that family lived in California (the only state so far where fuel-cell cars are offered) near one of the handful of hydrogen refueling stations then dotting the Sunshine State.

But I drove an FCX Clarity back then, and aside from a constant faint background whine from its fuel-cell stack, it was amazingly like driving any other electric car.

“Any other electric car?” you might ask? Yes. Because in essence, a fuel-cell car is simply an electric car that uses a fuel-cell stack instead of a large battery pack to supply electric power to the motors. And what feeds the fuel-cell stack is a large tank of hydrogen stored under high pressure. (Also note that Honda is expected to bring out pure electric and plug-in hybrid versions of the Clarity later this year.)

In actuality, a fuel-call car also has a small battery – about the same size as one in a conventional hybrid car – but the long-range power comes from the fuel-cell stack. In the redesigned 2017 Clarity (this generation drops the former “FCX” prefix), the battery has a capacity of 1.7 kWh – about the same as that in the Honda Accord Hybrid – whereas the battery in most electric cars ranges from 16 kWh to 100 kWh. 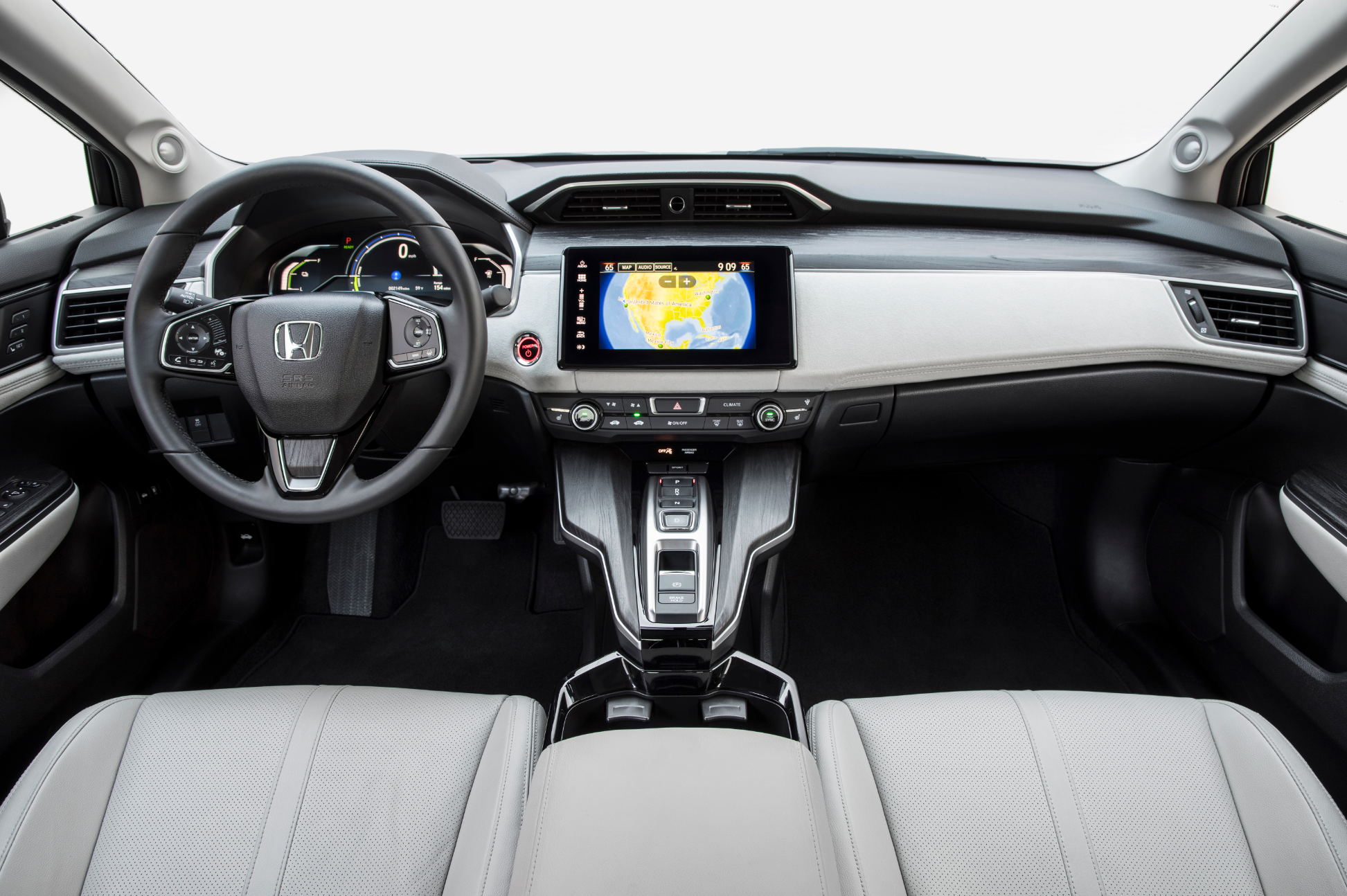 Interiors are trimmed in upscale materials, offer 5-passenger seating (with plenty of room for four full-size adults), and are fitted with a full complement of luxury features.

One point in favor of a fuel-cell car is range. The new Clarity can go an EPA-estimated 366 miles on a full tank of hydrogen, whereas electric cars with the aforementioned batteries can only go about 60 to 300 miles. And recharging those batteries takes a rather long time; how much varies a lot depending on whether they’re being charged on a Level 1 (normal 110-volt household outlet), Level 2, or Level 3 charger (the latter being somewhat rare) and how much charge needs to be replenished. But figure on gaining about 4 miles of range per hour of charge on Level 1, 10 miles per hour of charge on Level 2, and about 80 miles per half-hour on Level 3. But completely filling the Clarity’s hydrogen tank from empty only takes about five minutes. And the only “emission” from a fuel-cell car is a small amount of water … which California needs anyway.

The disadvantage is that the fuel-cell stack requires the aforementioned hydrogen to fuel a conversion process that produces electricity, and hydrogen is not exactly a commonly available gas. Right now, there are only about 25 public hydrogen fueling stations in California (nearly all of them around Los Angeles and the San Francisco Bay Area) and virtually none anywhere else in the country. However, the number in California is expected to grow substantially over the next few years, and several more are due to be added in some northeastern states. But it’s going to be a long time before people can “fill ‘er up” at virtually any corner station as they can with a gasoline car, and certainly not in their garage, as they can with an electric car.

Also, hydrogen is not cheap. Although prices are expected to drop significantly as use rises, right now, even a fuel-cell car as efficient as the Clarity costs about 21 cents per mile for fuel. That equates to a gas car that only gets about 14 mpg on $3/gallon gasoline.

But that’s part of the beauty of the Honda Clarity: The fuel is essentially free. Because when you lease the car, you get a hydrogen-only credit card loaded with $15,000, which Honda estimates should take you all the way through your 3-year lease at the maximum of 20,000 miles per year.

Plus there are other freebies. Honda will cover the insurance on the car (though not the liability portion), and will include 21 days of a rental car over the 3-year lease period (in case the leasee wants to take a long drive out of the state). And although the lease requires $2868 down, the state of California will rebate you $5000, which means you’ll actually come out about $2000 ahead. Thus the lease of $369/month – about what you’d pay on a $30,000 car – ends up being a relative bargain. 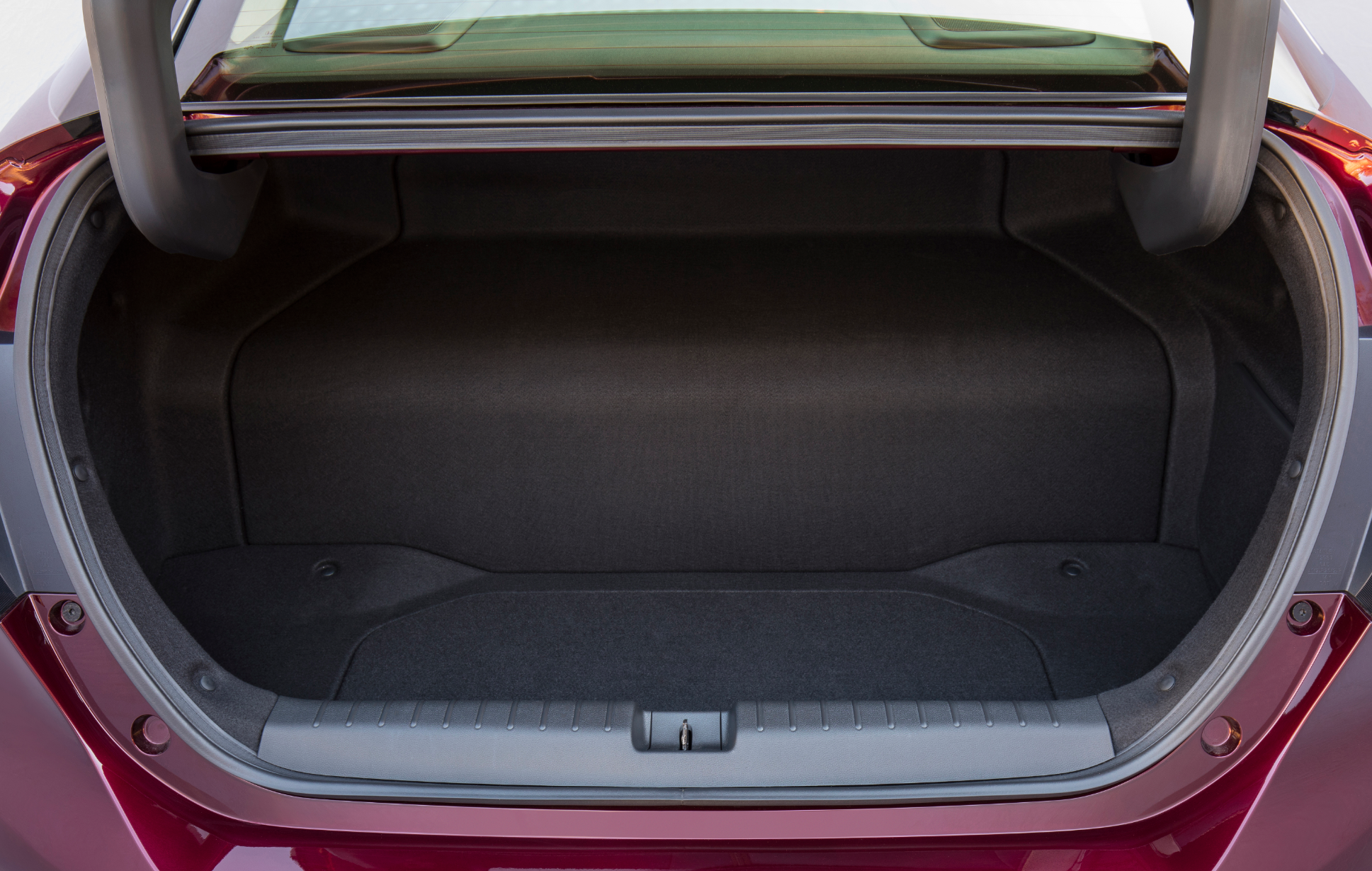 That “shelf” at the forward end of the trunk covers the larger of two hydrogen fuel tanks (a smaller one being under the rear seat). But even with that, the trunk is wide at the rear and fairly roomy, though a lack of fold-down rear seat backs means you can’t expand the space.

And in most ways, the Clarity compares favorably to your average $30,000 car. It’s nearly identical in size – both inside and out – to a current Honda Accord sedan, though some trunk space is sacrificed to the large hydrogen tank, as are fold-down rear seat backs. But the interior is nicely trimmed and offers a generous amount of storage space, visibility is quite good all around, it’s impressively quiet (about like any other electric car, as the former whine has been almost entirely eliminated), and it comes “loaded,” with an extensive list of features that leaves little to be desired. It also rides and handles very well, and though throttle response is not quite as strong as it is with most electric vehicles, it’s on par with that of most 4-cylinder sedans. 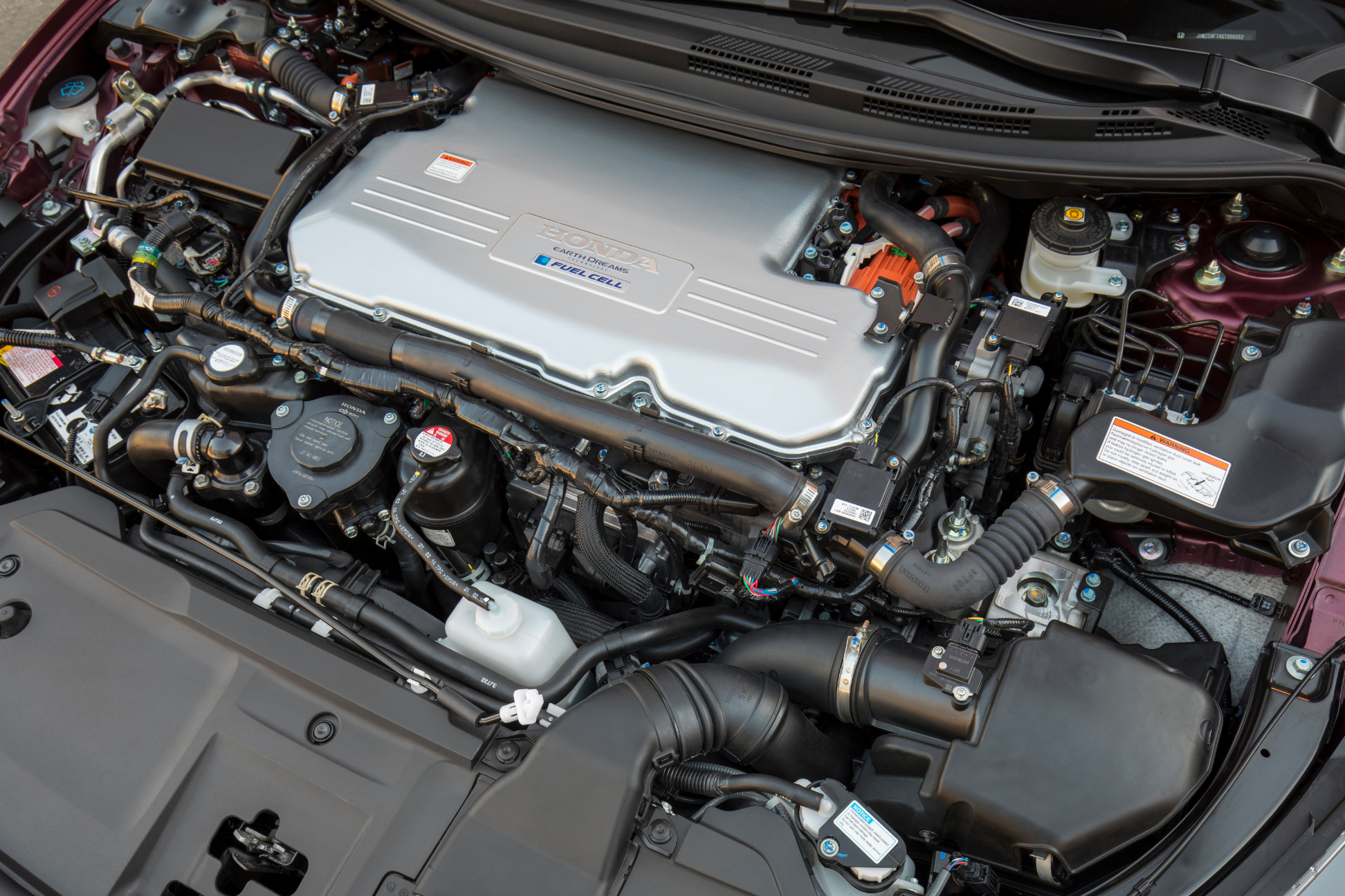 Fun April Fools prank: Ask your mechanic to check the oil. Although it looks much like a regular gas engine, what’s under the hood is the fuel-cell stack, electric motor, and associated electronics and plumbing — none of which contain any oil.

What it comes down to is that – right now – a fuel-cell car isn’t a viable cost proposition if it had to stand on its own. (The Clarity’s MSRP is just under $60,000, which probably doesn’t come close to covering the true cost of building the car.) But companies like Honda subsidize them to the point that they’re relative bargains, because having them out in public hands not only provides valuable “real world” test experience, it gives the company positive exposure. And though the general feeling is that it will be some time before fuel-cell cars become commonplace – and even longer before they become the norm – fuel cells are considered an important supplement to gas, diesel, and pure electric propulsion in the 20-year timeframe, and have considerable appeal as a primary source of power further down the road.

Honda estimates that only about 900 people will be able to lease a Clarity this year, probably far fewer than would like to. But if it suits your needs – and you’re lucky enough to be among the chosen few – you, too, can drive something truly revolutionary.

All of the fuel-cell powertrain components fit under the Clarity’s hood — a monumental achievement in packaging. Under the front seat is the small battery, while beneath and behind the rear seat are the two hydrogen tanks.