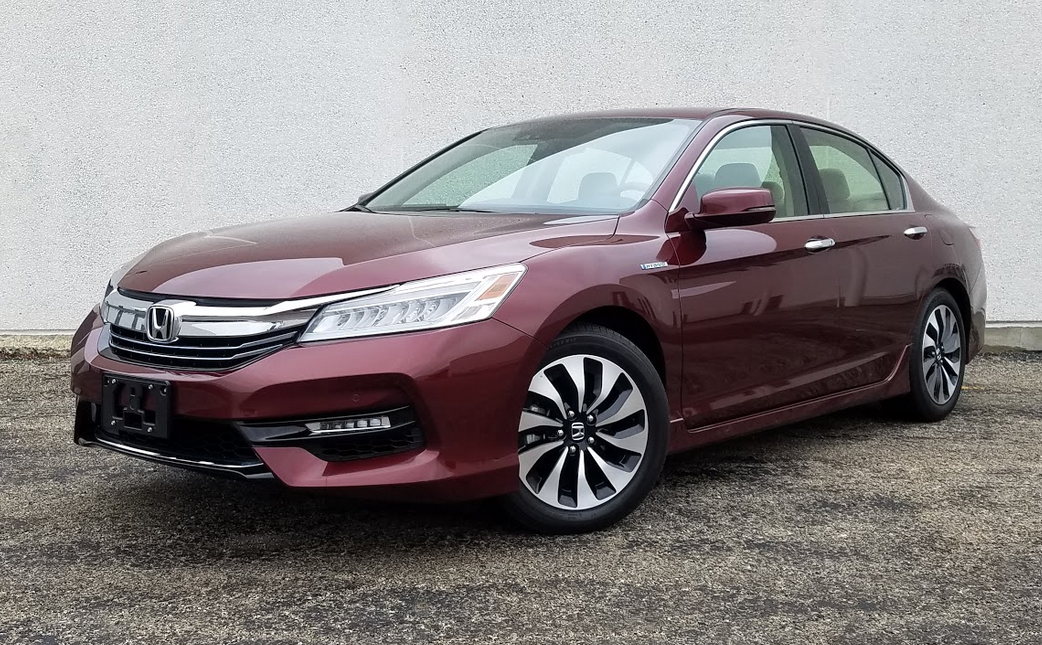 The not so good: Transmission can be slow to respond to quick throttle inputs

The Honda Accord lineup is back to full strength for 2017. When the Accord was touched up a bit last year, gas/electric hybrids were missing from the model mix as Honda moved production of them from Ohio to Japan. Now the high-mileage model is back with a new drivetrain that combines a 2.0-liter 4-cylinder engine with two electric drive motors for a system total of 212 horsepower. 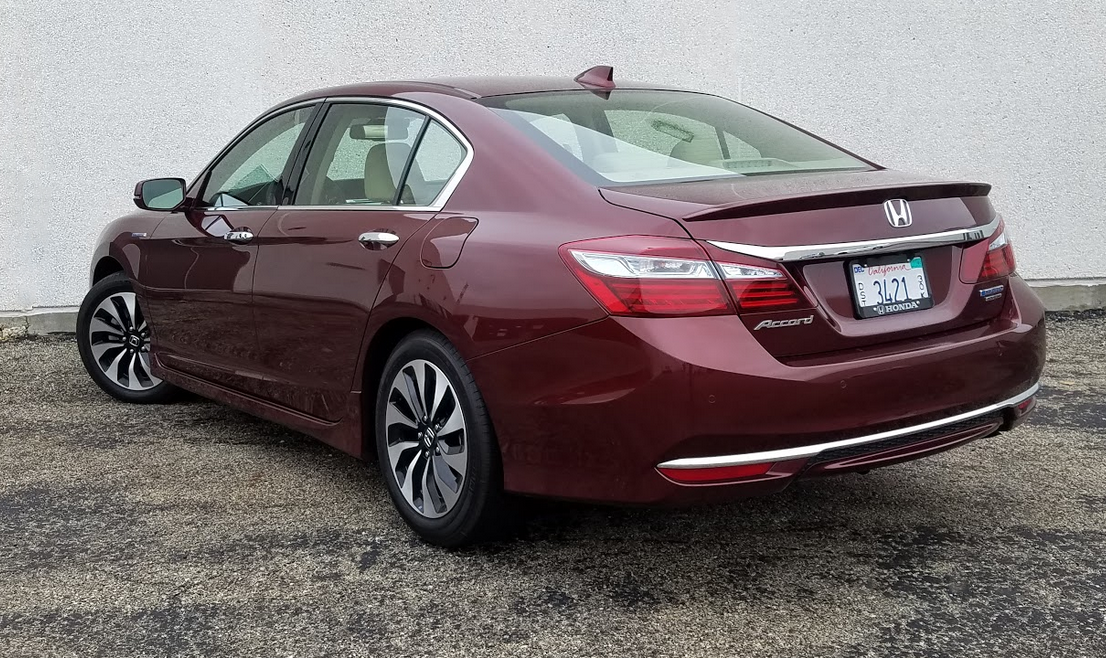 Details such as the subtle rear lip spoiler, bodyside rocker-panel moldings, and 17-inch alloy wheels give the Accord Hybrid Touring a fairly sporty look–especially for a fuel-sipping sedan.

Accord Hybrid comes in a choice of three trim and equipment levels—base, EX-L, and Touring. Consumer Guide® tested a Touring, which has the distinction of having the highest starting price of any Accord at $35,955 before delivery or individual accessories are added. (There are no option groups or packages available.)

These features distinguish the Touring from other Accord Hybrids:

What doesn’t change between any of the midsize Honda hybrids is what makes them go. The new two-motor hybrid system uses one motor to accelerate from a dead stop, and the second to start the gas engine and charge the first motor. As such, an Accord Hybrid is more powerful than its linemates that rely solely on a 2.4-liter gas four. Hybrids show off better-than-adequate acceleration from a stop and cruise the expressway fairly easily and quietly, and transitions from electric to gas power are virtually imperceptible. However, the continuously variable transmission can be a little stultifying for passing or midrange acceleration. “Sport” mode, activated via a button on the center console, calls both motors into play for what Honda claims is better acceleration. This reviewer wouldn’t call the effect dramatic, however.

All 2017 Accords boast a spacious, comfortable, and ergonomically agreeable cabin, and the Touring trim level brings upscale touches that make for a particularly pleasant ambiance. Rear-seat room is an Accord-sedan strong point.

While hybrids can tap two sources of power for extra zip, their true calling is to improve gas mileage. The Accord has EPA ratings of 49 mpg in city driving, 47 on the highway, and 48 combined. Yours truly is always eager to report his personal experience at the gas pump, but this time he’s got to raise a red flag.

This driver finished his stint with 184 miles between fill-ups. As such, he got an impressive 48.4 mpg in a run with 70 percent city-style driving.

The alter ego to the Sport mode is an “Econ” setting that changes fuel delivery for more economical operation. 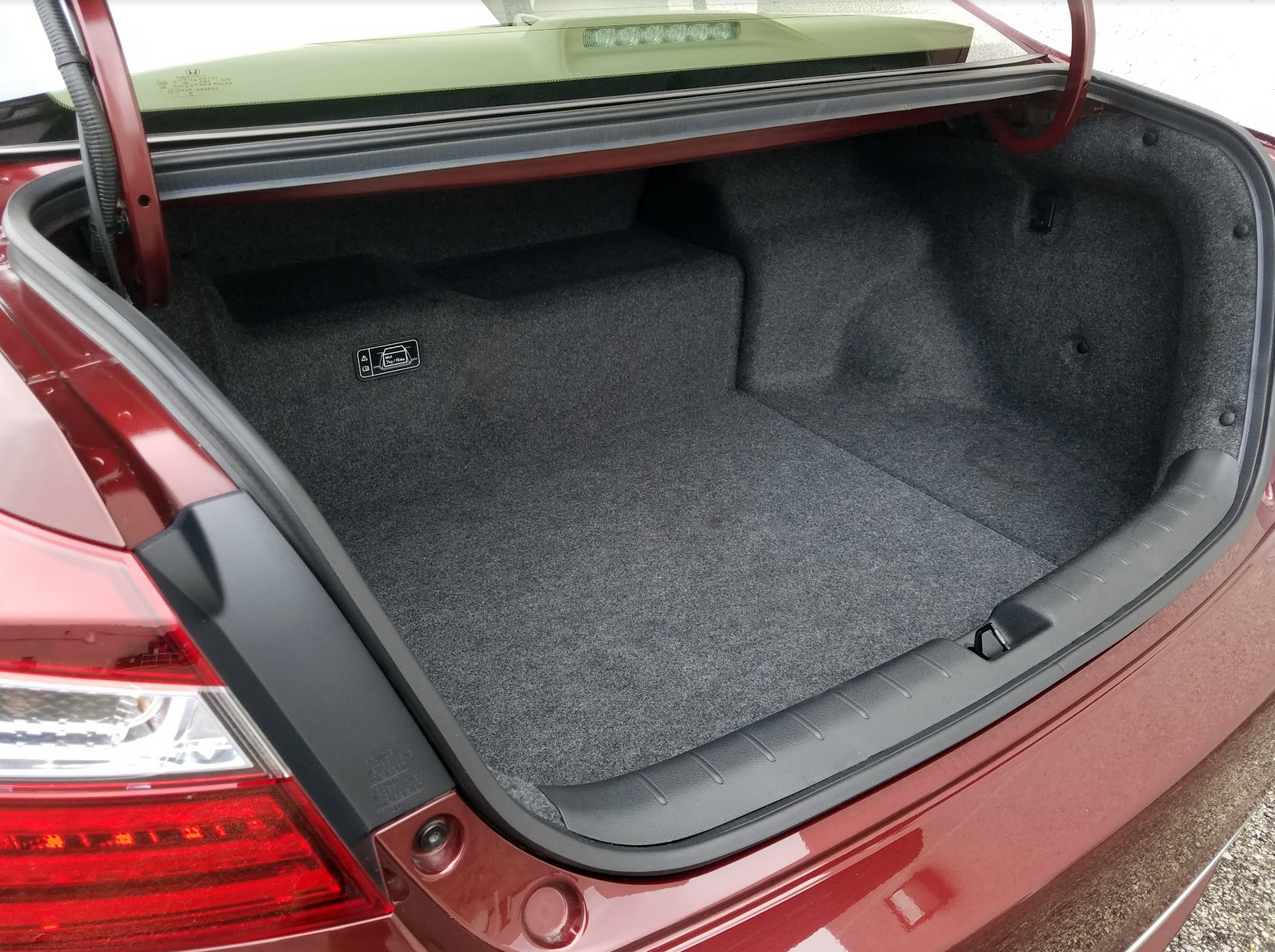 The hybrid system’s battery pack compromises the Accord Hybrid’s trunk versatility–storage space is down to 13.5 cubic feet (from 15.8 in non-hybrid Accord sedans), and the rear seat backs don’t fold.

The electric motors sip their juice from a more compact battery design than before—that allows an increase in trunk space compared to previous Accord Hybrids. Even then, the pack still forms a sizeable block at the back of the trunk and removes the opportunity for folding rear seats. However, with no spare tire (an inflator kit is standard), there is some storage under the floor in two fairly large bins.

Except for the instrumentation, some of which is specific to monitoring the hybrid powerplant, and 17-inch wheels and tires, the passenger experience in CG’s Crimson Pearl test car was a lot like the 2016 V6 Accord Touring previously tested. The Hybrid’s deeper-profile tires provide a little more ride cushioning, and its more modest tire dimensions actually help reduce the car’s turning circle for added maneuverability. Driving controls are large and legible, but establishing radio presets on the 7-inch display screen isn’t exactly a snap—it’s a lot easier to do things like change stations or sound volume through the steering-wheel thumb buttons than it is to pick around on the screen.

Front-seat passengers enjoy good seat comfort and ample room. There’s decent adult legroom in back, too, and enough width and floor space to cram three grown-ups back there at least for a short trip. The standard moonroof didn’t leave this driver short of headroom. Rear-seat passengers aren’t affected by the moonroof, but 6-footers will probably be probing the headliner with their scalp. Drivers will find outward vision up to Accord’s usual high standard. Personal-item storage is usefully plentiful with a deep glove box, a covered bin under the dash with a power point, a smallish covered console box with power and USB ports, four door pockets with bottle holders, and pouches on the backs of the front seats. Two open cup holders are in the console and two more are set into the pull-down rear-center armrest.

Other than badges and a couple trim details, Accord Hybrids look mostly identical to their traditional gasoline-engine siblings.

Seats are dressed in a soft perforated Ivory leather that contrasts nicely to the black upper-door and dash surfaces. Woodgrain highlights adorn the instrument panel and doors. Other Touring standard features—regardless of powerteam—include the Honda Sensing suite of electronic safety-systems, smartphone-enabled HondaLink to access things like personal music and podcasts, Apple CarPlay or Android Auto connectivity, and satellite radio.

All in all, the Accord Touring makes for an enticing midsize sedan. Anyone who wants that and the chance to rack up substantial fuel savings will certainly find it in the Accord Hybrid Touring.

Just like pure electric vehicles, hybrid cars operate less efficiently when temperatures fall. Local temps hovered right around freezing during the week that our Accord Hybrid Touring test vehicle came to call. Not that an average of 43 mpg is anything to complain about, but our test car would likely have returned numbers closer to the EPA estimates had this evaluation been conducted in May. All that said, any Accord is a good car, and one that breaks 40 mpg is worth knowing about.

The Accord sedan’s generously sized windows and relatively low beltline contribute to outward vision that is among the best in the midsize-car class.