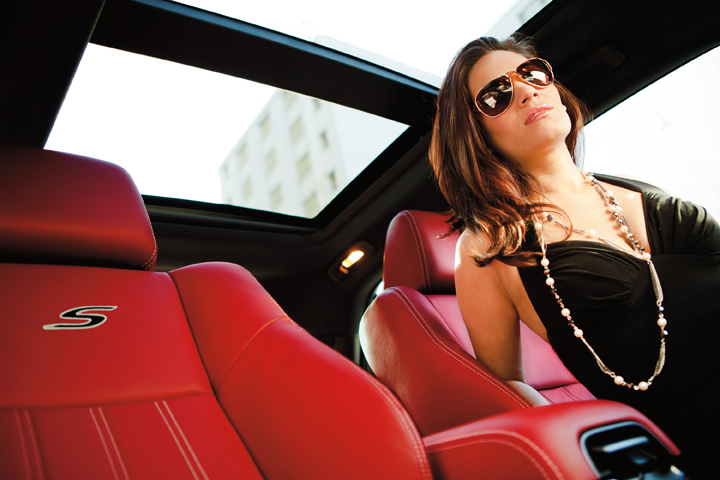 A panoramic sunroof and red upholstery are two of the eye-catchy features on the 2012 Chrysler 300 S.

We’ve recently seen a flood of Chrysler Group vehicles through our office. It’s hardly a surprise given just how many new and freshened products the company has released in the past 18 months. Just in the last two weeks, we’ve been able to test the Chrysler 200 convertible, Chrysler 300 S, Dodge Durango R/T, Jeep Patriot, and Ram 1500 Tradesman. This is in addition to our extended-use Durango Crew.

It’s the 300 S that we want to focus on here. It’s a seemingly small update to Chrysler’s big sedan, but there’s actually quite a bit going on here. While many of its updates can also be found in other 300 models for the 2012 model year, we’d like to call out a few that deserve special attention.

Cool Features of the Chrysler 300 S

The Chrysler 300 remains one of the most boldly styled cars on the road. Its appearance remains uniquely American. The S model offers some notable tweaks that give it a more sporting flair.

The blackout grille highlights an exterior largely devoid of shiny chrome pieces. Flanking the understated body panels are polished alloy wheels with black accents. The wheels are 20 inches in diameter on rear-drive models, 19 with all-wheel drive.

Chrysler offers the 300 S with either its 3.6-liter “Pentastar” V6 engine or 5.7-liter “Hemi” V8. For the 2012 model year, V6 300s are available with a new 8-speed automatic transmission. This is standard fare on the S. The three extra gears make the car feel more responsive at all speeds. It doesn’t have the off-the-line jump of the Hemi, but the V6 is more than adequate while promising significantly better fuel economy. Speaking of which . . .

With rear-wheel drive and the 8-speed automatic, the 300 S is EPA rated at 19 mpg city/31 mpg highway. Not too shabby for a car weighing two tons. Those numbers are a significant increase over the 5-speed automatic’s 18 city/27 highway score.

We averaged 22.2 mpg in a V8-powered 300, but that was in a test skewed heavily toward highway driving. With more city work as of this writing, our V6 300 S test car is averaging 21.2 mpg. In my personal 165-mile drive, which included a run to and around downtown Chicago, I achieved a pretty stellar 24.5 mpg.

As I’ve said before, I’m not an audio snob, but I know what sounds good to me. Chrysler partnered with hip-hop legend Dr. Dre, bringing his Beats audio brand to the 300 S. You can find the Beats logo on plenty of consumer electronics. Having sampled the technology on a Hewlett-Packard laptop, I came away largely unimpressed.

Perhaps it was the small confines of the portable computer, but the Beats audio sounds much better in the 300. Chrysler and Dr. Dre could have slapped the logo on a subwoofer and called it a day, but the system is very well integrated into the vehicle. The sound is clean and clear, and you can gleefully pump up the bass to annoy your neighbors and dog.

If I had one small complaint, it would be the presence of the bright red Beats logo on the speakers in the cabin. It’s fine if you choose the red leather upholstery option, but in the otherwise all-black cabin of our 300 S test car, it looks out of place.

It might be small in the grand scheme, but I like and appreciate the 300’s heated and cooled cupholders. They won’t keep your drink boiling hot or Arctic cold (no doubt Chrysler’s lawyers had some say in that), but they’re a nice touch that you won’t find in most vehicles of any price.