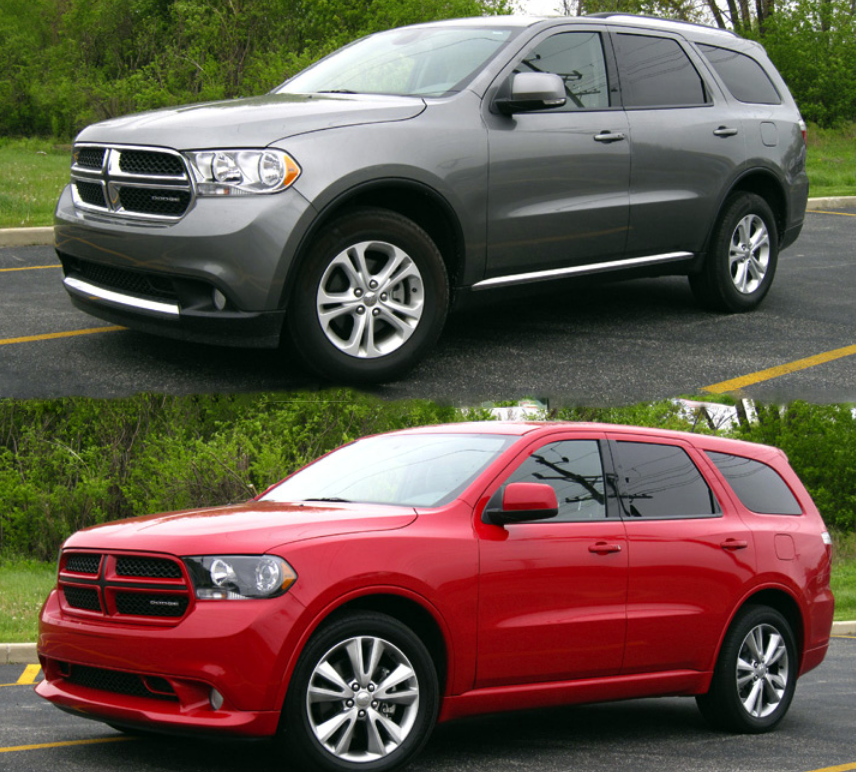 Last week, a “Redline Pearl” all-wheel-drive Dodge Durango R/T joined our short-term test car fleet. Since we also have an AWD Durango Crew in our long-term test fleet, we figured an impromptu photo shoot was in order.

The side-by-side comparison makes for an interesting case study in how an auto manufacturer can add a little high-performance attitude to a mainstream vehicle with a few simple (and cheap to produce) styling touches. To some, the Durango R/T may look a bit too puffed-chest pretentious; to others, it may be just right.

In this case, the difference in appearance between the mainstream variant and its hot-rod sibling is an accurate barometer of the difference in their driving character. The biggest difference is under the hood; the R/T replaces the Crew’s 290-hp 3.6-liter V6 with a 360-hp 5.7-liter Hemi V8. Naturally, the Hemi is gutsier, and it feels gutsier still because its low-restriction exhaust system makes the R/T sound like a nasty muscle car. To some, the aggressive exhaust burble will grow tiresome; to others, it’s pure music.

The Hemi’s most obvious shortcoming is fuel economy. We’re averaging 18.3 mpg in our long-term Crew; not outstanding, but not bad for an SUV of this size. We couldn’t even manage 14 mpg in the R/T. It’s also worth noting that Dodge recommends pricier mid-grade 89-octane gas for the Hemi, while the V6 uses regular or E85.

The other significant difference is ride quality. The R/T has a sport suspension and 20-inch wheels in place of the Crew’s 18s. So, it corners a bit more crisply but rides a lot more harshly.

The sticker prices of these two are within spitting distance of each other: $39,020 for our Crew long-termer, and $39,240 for the R/T. The R/T is about $2,300 more to start, but our Crew has a leather interior and a fancier navigation system—two options that close the price gap.

To some, the R/T’s extra swagger and performance are worth its penalties. To others (including most of us at Consumer Guide), not so much.

Red paint, monochromatic/blackout trim, and a spoiler can definitely add a shot of testosterone to a vehicle’s styling.

At the rear, the R/T gets the all-important dual exhaust tips as well as a monochromatic treatment that includes the lower-bumper panel and the trim piece between the taillights. (Note that even the “DODGE” trim letters are body color).

The R/T’s 20-inch wheels and lower-profile tires give it a sportier look and provide crisper handling, but they also ride much more stiffly than the 18s on our long-term Crew. 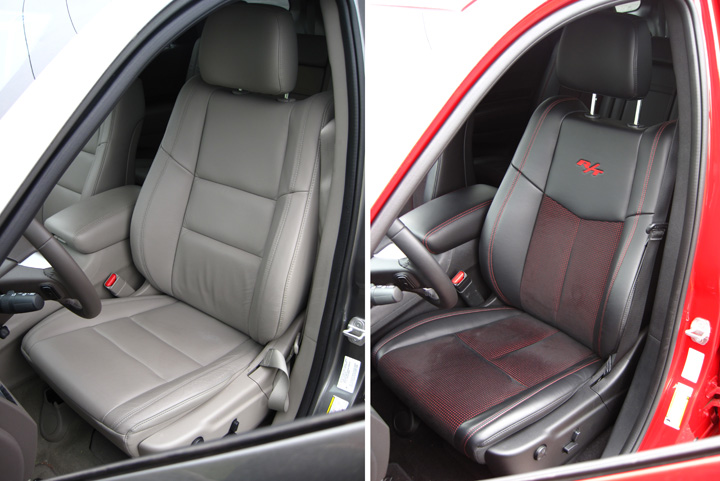