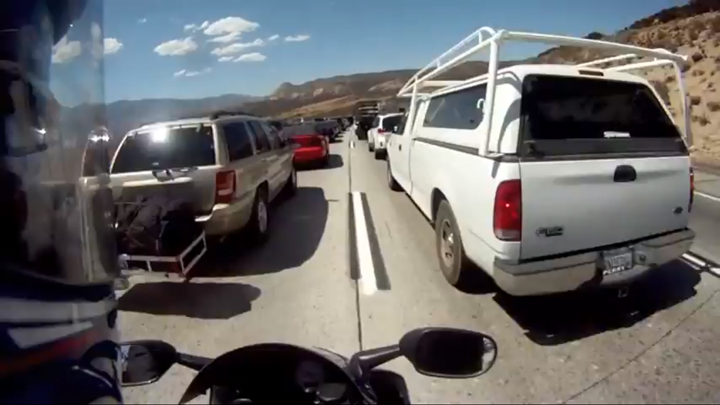 While this motorcycle maniac can legally split traffic in California, your grandmother can get a ticket in that state for walking across the street.

Although I’ve visited California frequently over the past 20 years—and even lived there briefly back in the ’70s—it always takes a while after arrival to acclimate to the local climate. And I don’t mean the weather. I mean the driving climate. Which, like the weather, differs from that of the rest of the country.

If you grew up in the Golden State, most of these automotive-related rules won’t seem odd at all. But you should know that they aren’t the norm in most other parts of the country. Keep in mind that these are just the ones in the automotive realm; I’m not even going to touch on your selection of celebrity governors, your affinity for fruit smoothies, or the unsettling number of young men I’ve seen wearing Capri pants.

1) Motorcycles can split lanes.
Many people probably don’t even know what that means. And even after I explain it, they probably won’t know what it means because it just seems so illogical. But here goes: Believe it or not, it’s legal for motorcycles to exceed the flow of traffic by riding between the lanes of cars. Now, I think legally they’re not supposed to exceed the flow of traffic by more than 20 mph, but like the speed limits themselves, that’s really just a suggestion. I also think it’s supposed to be when traffic is snarled and thus running slowly, but it can happen at any speed. You’re just driving along the highway and WHOOSH—a motorcycle blows by inches from your door. And yes, your first impression is something to the effect of, “Holy Crap! What if I had wanted to change lanes?” But at least the state makes those riders wear helmets.

2) You can’t cross the street in the middle of a block.
This mostly pertains to cities, I imagine. It first came to my attention back in ’79 when a fellow Midwestern expatriate got a ticket—and a fine—for crossing a Los Angeles street in the middle of a block. It wasn’t busy, and he wasn’t impeding the flow of traffic; in fact, about the only car around was the police car. But that’s nothing compared to . . .

3) You can’t cross a street unless you have the “Walk” sign.
Yes, of course, that’s what you teach your toddler. But in the grim reality of urban life, you’d never get anywhere. Not sure about the rest of the country, but in Chicago, at least, any time or place you can get to the other side of a street without bloodshed or bashed bumpers is considered a clean cross.

4) Always yield to pedestrians in a crosswalk—even stupid ones.
These yahoos will just walk right across without regard for moving traffic; they step off the curb and expect cars to come to a screeching halt. And I think that’s the law. Of course, the law always gives pedestrians the right of way, and Chicago recently instituted a similar law; but here, at least, a certain level of survival instinct prevails. Woe be the Californian who ventures into the Windy City.

5) No hand-held cell phones while driving—anywhere.
This one I don’t disagree with in principle, and it’s now the law in the city of Chicago. However, in California it’s a statewide law, meaning it’s applicable even on barren roads in the backwoods boonies. That’s not the norm in the rest of the country, so take this as a warning.

It has long been said that California is the tail that wags the nation’s dog, so some of these laws may soon be coming to a state near you. And, as I’ve noted, some have already been adopted by my sweet home, Chicago. But unless and until they’re followed nationwide, they might cross up some travelers. And regardless of what the law allows, I hope I’ll never be stupid enough to split lanes on my motorcycle.