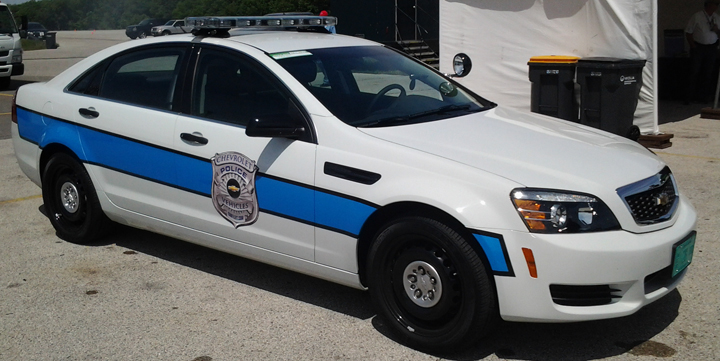 I like police cars. I think they’re cool, exciting, and just plain bad-ass. It’s thrilling when I see one speeding down the road with the lights flashing and the siren going. Even though the mid-1990s Chevrolet Caprices and Ford Crown Victoria-based Police Interceptors weren’t the best looking vehicles to my eyes, they still exhibited a certain measure of get-out-of-my-way authority when dressed in police livery.

In the case of Chevrolet’s newest cruiser, the Caprice PPV, I think it looks good all by itself. Crisp body lines that rise as the eye goes from front to back, a simple yet pretty front end, and a trunk that is long enough to visually balance out the long front hood all appeal to me. This vehicle is derived from the Holden Commodore, a vehicle sold by GM in Australia that lent its basic design to the 2008–2009 Pontiac G8. However, the Caprice PPV has been outfitted with equipment meant to endure police duty and perform well when the job demands it.

The front seats have cutouts below the modest side bolsters for officers wearing equipment belts. The center console is simply a black metal plate with a multitude of holes drilled in it so computers and other equipment can be mounted to it. PPV is available with a 301-horsepower 3.6-liter V6 or a 355-horsepower 6.0-liter V8, each connected to a 6-speed automatic transmission. The brakes are heavy-duty units, and they use “police calibrated” ABS. Chevrolet says the Caprice PPV outperformed the Dodge Charger and Ford Taurus-based Police Interceptor with EcoBoost during Michigan State Police’s annual benchmark police vehicle evaluation. This car is available with a spotlight or spotlight preparations; wiring for a siren, light bar, and horn; and disabled rear interior door handles, locks, and windows. A multitude of other police-appropriate options are available.

I had never used a police car’s spotlight before, but it’s surprisingly simple: To aim it up or down, you tilt the handle forward or backward. To pivot the light, twist the handle. And, wow, that thing is bright! Anyone who has been pulled over at night will tell you the same thing. I turned it on during a very sunny day, and it still reflected clearly on the taillights and license plates of the cars in front of me. Also, the company that makes the light-bar units for the roof of the PPV must, by law, encode each unit with a unique serial number. If the bar is ever stolen, it can be returned to the proper police department. Understandably, the lights and siren were disabled on this particular test vehicle, so we can’t tell you how they look or sound.

As for the drive, I sampled the Caprice PPV equipped with the V6 engine by taking it on a brief hot lap on the Road America racetrack in Elkhart Lake, Wisconsin, during a recent press event held there. Though it lacks roughly 50 horsepower compared to the available V8, the V6 still does a good job of accelerating the PPV with verve. The “cop brakes” are decently strong and pedal feel is fine. The “cop tires,” “cop suspension,” and “cop shocks” deliver good ride and handling on smooth roads, and they effectively damp most bumps and dips otherwise.

Before this encounter, I had (thankfully) never been in a police car before, but the back seat in this vehicle isn’t all that bad. It’s a bench seat upholstered in soft vinyl with decent support and padding. I would comment further on the rear seat and its mostly comfortable accommodations, but law-enforcement agencies usually swap out the stock bench seat for a hard, molded-plastic unit with cutouts for hands cuffed behind the backs of rear-seat occupants. Additionally, this piece affords officers a certain degree of “hose it out” ease of clean up.

Overall, I’d say it’s a viable candidate for police forces across the nation, but competition from the other members of the Detroit Three automakers will undoubtedly be fierce. Though we haven’t driven Dodge’s and Ford’s new police vehicles, we will say that the Caprice PPV certainly seems to have the chops to catch the bad guys and bring them to justice.