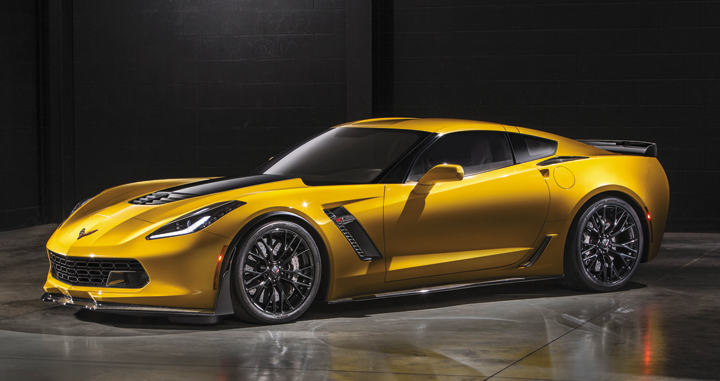 Note: The following story was excerpted from the April 2015 issue of Collectible Automobile magazine.

Named for the option code of a performance package available on the 1963 Sting Ray, the Z06 was introduced as a racetrack-oriented Chevrolet Corvette variant in 2001. Z06s since then have been special, but the added choice of coupe or convertible body styles and manual or automatic transmissions, not to mention increased performance, will almost certainly make the 2015 Corvette Z06 desirable to collectors.

While clearly based on the current Corvette Stingray, the Z06’s appearance has been tweaked to support the car’s mechanical changes. Bigger wheels and tires dictated flared fenders. Increased airflow for driveline cooling was delivered via larger vents on the front and rear fascias and the carbon-fiber hood. Front and rear ducts help cool the brakes. Engineers’ desire to increase aerodynamic downforce for improved cornering grip and stability at speed resulted in the addition of a front splitter, front-wheel spats, and a larger rear spoiler. 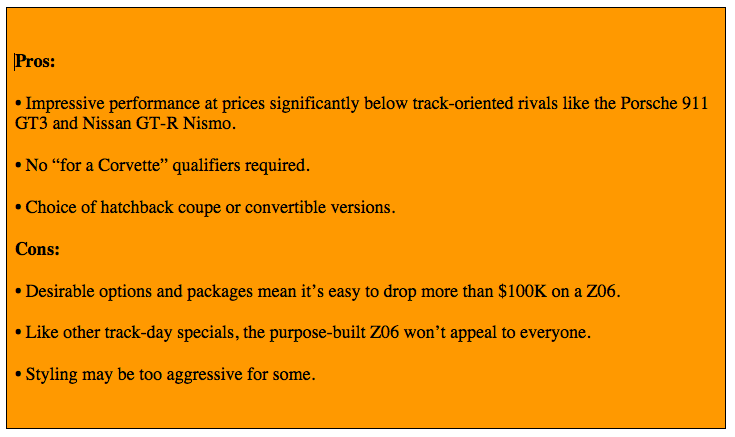 More from the pages of Collectible Automobile

The Z06’s foundation is an all-aluminum frame that Chevy says is 20 percent stiffer than the previous structure. It’s rigid enough to be used nearly unchanged in the Corvette C7.R racecar and in the newly available Z06 convertible. It also allows the Z06 coupe to have a removable roof panel for the first time.

Earlier Z06s were naturally aspirated, but the latest version’s LT4 engine is a supercharged 6.2-liter V-8 rated at 650 bhp and 650 pound-feet of torque. That’s up by 195 ponies and 190 pound-feet on the base Stingray, and even betters the 2013 ZR1’s numbers. Other engine upgrades include titanium intake valves, forged powdered-metal rods, forged aluminum pistons, and a dry-sump oiling system.

A seven-speed manual transmission is standard. New is an optional eight-speed automatic with shift paddles. GM claims the traditional torque-converter automatic delivers the best performance, and that it shifts gears faster than the Porsche 911’s well-regarded PDK dual-clutch gearbox.

The interior comes in three trim levels in a choice of five colors. There’s a Z06-specific flat-bottom steering wheel, and two types of seats are on offer, comfort-oriented “GT” and aggressively bolstered Competition Sport buckets.

Newly optional is the Performance Data Recorder. It records what the driver sees along with in-car audio, and uses GPS to plot the car as it laps a racetrack. The resulting presentation includes synchronized performance data, and can be viewed on the car’s navigation screen or transferred to a computer and shared.

So, what’s the bottom line? According to Car and Driver, an automatic-equipped coupe with the Z07 package ripped a 0-60-mph time of three seconds flat and covered the quarter mile in 11.1 seconds at 127 mph. C/D logged 1.19g on the skidpad and a stop from 70 mph in 128 feet—the best production-car grip and braking numbers the magazine has ever recorded. Prices start at $78,995 for the coupe and $83,995 for the convertible.