GM Implies That Spark Approaches the Roominess of a ’70s Full-Size Sedan. Really?

After being sold overseas for two years, Chevrolet’s Korean-designed and –sourced Spark subcompact car is arriving here soon as a 2013 entry. Naturally, the bow-tie brigade has cranked up its PR machine to make sure everyone knows about it. Leading the hype parade is a press release that caught our eye. Headlined “Four Decades Later, Mini Cars Livin’ Large Sedan Life,” it makes the point that although the Spark and its ilk may be small outside, they’re deceptively roomy inside. In fact, Chevy claims the Spark is as spacious as full-size American sedans of the early and mid-1970s, which it aptly termed “some of the largest passenger cars ever.”

Here’s the bulk of the text verbatim:

Apropos for the age of Facebook and YouTube, an accompanying graphic repeats these points above profile drawings of the new Spark and an old Nixon-era biggie. 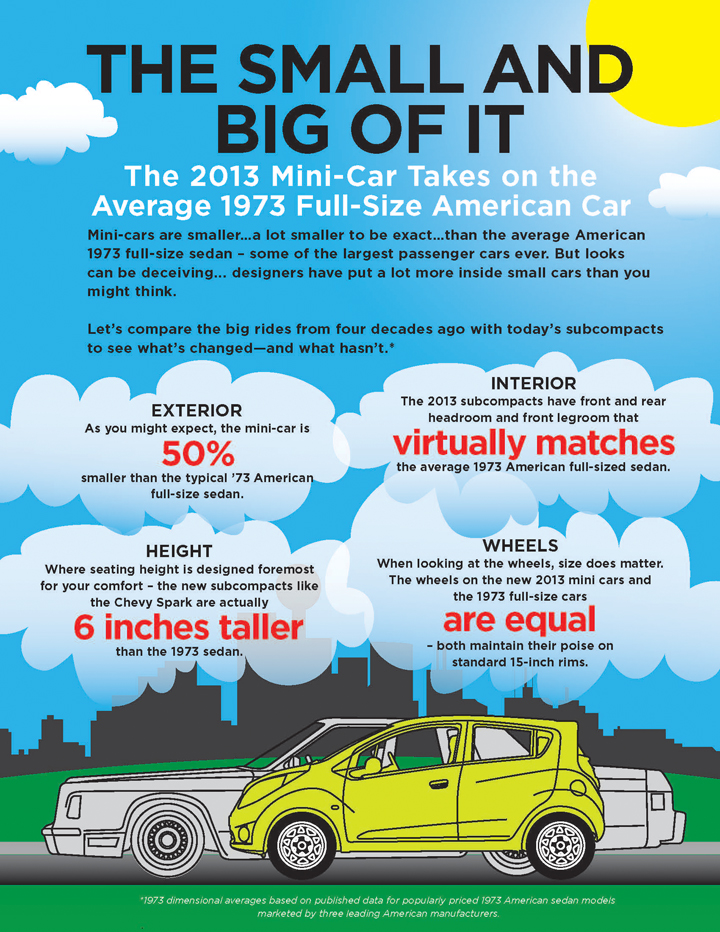 Of course, this comparison is utterly meaningless. The world has changed enormously in the last 40 years, as has technology, so cars have naturally changed as well. Even so, the Spark is not that far removed from America’s first modern homegrown small cars, the 1978 Dodge Omni and Plymouth Horizon. Compact front-wheel drivetrain? Check. Tall, boxy body to further maximize interior space within the vehicle footprint? Check. Four doors and a hatchback for utility? Check. Wheel sizes? Well, most “Omnirizons” had standard 13-inchers, but so do some versions of the Spark sold overseas.

What Chevy isn’t saying here is that the Spark we’re getting is a Version 2.0, with various changes and upgrades prompted by feedback from V1.0 customers in China, India, and Europe. So the fact that our Spark comes on 15-inch wheels is no big deal, especially since, the Fiat 500, Ford Fiesta, and many other class rivals have them too.

As for the noted similarities in cabin room, you’ll note that Chevy conveniently omits mention of rear legroom—understandable, as the Spark’s wheelbase is at least 2 feet shorter than that of the old Detroit giants. Is there any doubt it’s gonna be very cramped back there? The Spark also loses big-time for cargo space. How could it not with that ultra-bobbed tail?

And then there’s the vintage full-size Detroiter that Chevy chose for its illustration. It’s quite clearly a post-1973 Chrysler Corporation model with a soupçon of Ford thrown in. I’d guess Chevy doesn’t want to remind us that it, too, peddled thirsty, outsized, overweight cars in those years—cushy cruisers that were neither space-efficient nor all that “poised” in even moderately taxing direction changes. Yeah, they sold Chevettes and Vegas, too, but Chevy hopes we don’t remember those, either.

Selective amnesia. It didn’t work for most of the Watergate defendants back then, and I don’t think Chevy is doing itself any favors by resorting to it now. But that’s PR for you. Anything goes.