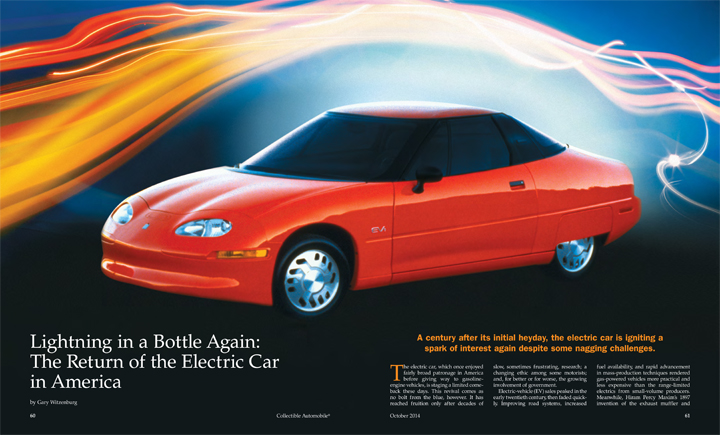 This article appeared in the October 2014 issue of Collectible Automobile® magazine.

An article on the reemergence of electric cars has won an award for Collectible Automobile® magazine, Consumer Guide® Automotive’s companion publication about motoring history.

The Society of Automotive Historians (SAH) presented its annual Carl Benz Award to “Lightning in a Bottle Again: The Return of the Electric Car in America,” which appeared in the bimonthly magazine’s October 2014 issue. Gary Witzenburg, a Michigan freelance writer whose work has appeared often in CA and many other outlets, wrote the piece. It tracked the gradual post-World War II revival of interest in electric-powered autos, and the technical developments and challenges that have paved the way to today’s crop of hybrid and full-electric vehicles.

The award recognizes excellence in the presentation of automotive history appearing in a periodical published in the previous calendar year, and is made jointly to the author and the publication. It was the first Collectible Automobile® article penned by Witzenburg to claim the Benz Award, though he did win an “honorable mention” Benz Award of Distinction in 2007 for an article on the Packard Proving Grounds. Overall, it was the ninth CA article to earn the SAH’s top periodical-writing award.

The presentation of the award was made on October 9 at the SAH’s annual meeting and awards dinner at the Hershey Country Club in Hershey, Pennsylvania. Founded in 1969, the society claims a membership of more than 900 around the world. According to its website, the not-for-profit society exists to “support the compilation and preservation of papers, organizational records, print ephemera, and images” related to the history of motorized land transportation and to promote the publishing and teaching of automotive history.