Many premium-brand vehicle owners aren’t content to follow the herd and don’t think twice about spending big bucks to customize their rides in one way or other. Porsche learned this decades ago, and it has cashed in handsomely with an endless parade of performance and cosmetic packages for its various products, many allegedly inspired by the brand’s racing exploits and all aimed at customers who just can’t resist lilly-gilding.

The tradition will continue this fall, when a “Powerkit” will be available for the 2013 Carrera S coupe and cabriolet, along with an “Aerokit” and other body addenda designed for any current 991-series Carrera. Pricing is under wraps until just before dealers begin taking orders. All this come from Porsche Exclusive, the German sports-car power’s in-house personalization department.

Thirty horsepower may not sound like much—and in this case it really isn’t. Porsche claims a Powerkit Carrera S coupe with the optional PDK dual-clutch transmission will do 0-60 mph in just 3.9 seconds, but that’s only about 0.2 sec better than a comparable non-kit car. And top speed, though academic in America, rises by just 3 mph to 191. Still, these gains could be important for those who go in for that bragging-rights pastime called bench racing. Happily, Porsche says the Powerkit has no effect on fuel economy, at least on the New European Driving Cycle (NEDC) test. U.S. EPA numbers could be a different story.

If you only want to look racier than a box-stock 991 Carrera, Porsche Exclusive will offer a new, lower-riding front apron containing the “open” air intakes from the existing Sport Design package, plus a fixed “ducktail” rear spoiler. Each is sold separately. So, too, is a new Aerokit Cup package that adds a fixed wing above the standard power rear spoiler and a special “front spoiler lip with additional air intakes.” Though this might seem a bit overwrought, with enough scoops and blades for a cookie factory, it actually looks pretty nice in Porsche’s official photos.

But if this is still not enough to satisfy, Porsche Exclusive is ready with an Exterior Package that covers the door mirrors, door handles, and such in body-color paint, rather than black or some other hue. As ever, the personalization staff is also eager to tempt you with myriad interior trim upgrades—including “match to sample” upholstery in any color a customer wants.

None of this is cheap, of course, but neither are Porsches, and there’s a ready, steady market for it—which helps explain why this automaker, despite its relatively small sales volume, is one of the most profitable on the planet. 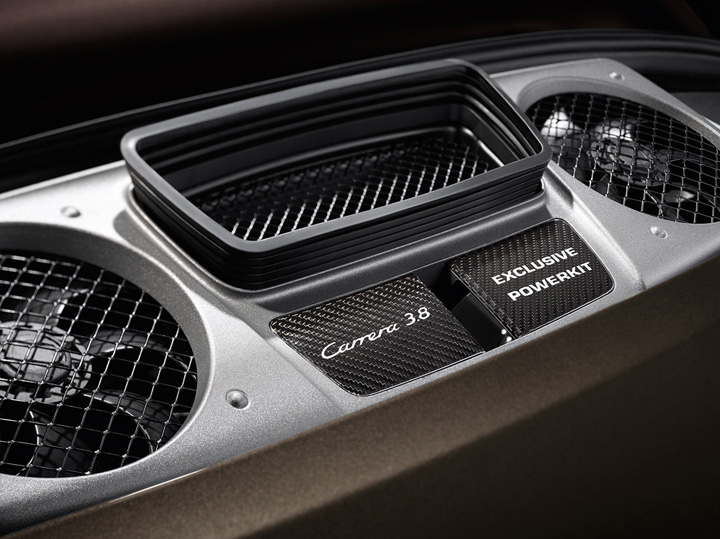 This engine cover and an added, central radiator are among the features of Porsche Exclusive’s new Powerkit option.

The Aerokit Cup package adds a fixed rear wing above the standard spoiler.

A ducktail spoiler from Porsche Exclusive dresses up this 911S Cabriolet. It’s available this fall for all 2012–13 Carreras.