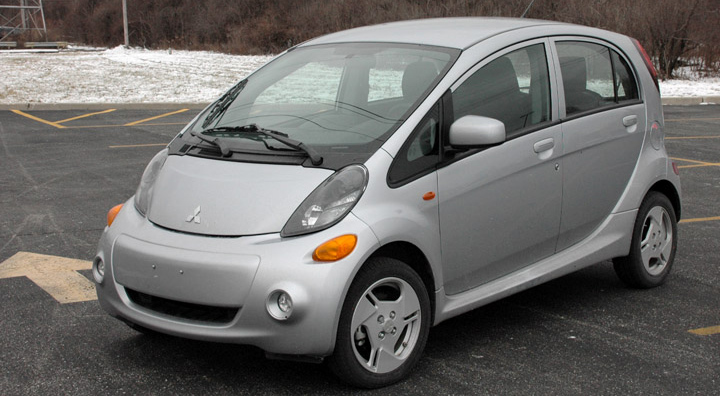 We’re heading into the home stretch of our yearlong evaluation of a 2012 Mitsubishi i electric car. It’s arguably the most challenging time because it now has to survive a Chicago winter.

As of this writing, this area has largely been spared of any major snowfall, but frigid temperatures are becoming the norm. Since December 20, the i has been in my care. While it stayed garaged for two road trips to central Illinois, I used the car rather extensively for going back and forth to the office and running errands around my northwest suburban home.

During this comparatively extended test drive, I came to learn a lot about how the i deals with freezing temperatures. Based on that experience, here are some “top tips” that current and potential buyers of this little electric car might want to keep in mind. Here’s what I learned about Driving an electric car in winter.

1) Prepare for Reduced Range
Cold temperatures and the use of the car’s heater noticeably reduces the car’s driving range. While I’ve been able to push the i to a range of up to 80 miles in the spring and summer, I was lucky to see 50 in December. And that was with very conservative use of the heater.

2) Heat That Seat
Mitsubishi thoughtfully includes a heated driver seat on all i models. It’s surprisingly effective, and its power draw is negligible. It’s far more effective than the weak climate-control heater, which is largely ineffective when the outside temperature is less than 30 degrees. Switch on the heated seat when the weather gets cold, and don’t turn it off until the thermometer is consistently above freezing.

3) Preheat the Cabin
When the car is connected to an electrical outlet, you have the ability to “preheat” the cabin. You can set this with a remote control keyfob. This feature is most effective when the car is connected to a 220-volt charging station. You can preheat the car when it’s attached to a standard household 110-volt outlet, but it doesn’t work nearly as well. On that note . . .

4) Charge, Then Heat
This was a lesson I almost learned the hard way. While out and about one day, I hooked the i up to a public charging station. Immediately after leaving the vehicle, I turned on the pre-heater so the cabin would be a bit more toasty when I came back to it. After an hour, the interior was indeed warmer, but the battery had barely replenished. Fortunately, I had enough juice to get home. Lesson learned.

5) Go Slow and Steady
When it snows, you need to be careful no matter what car you’re driving. This caution goes double for the i. It’s a tiny car with rear-wheel drive and hard low-rolling-resistance tires. While the car never went squirrelly in the bits of snow I encountered, it took a good deal more concentration than you might expect.

As long as you know, and are comfortable with, its limitations, the Mitsubishi i can be a perfectly serviceable winter-weather vehicle. Just make sure you have a hat, gloves, and warm coat when you get behind the wheel.