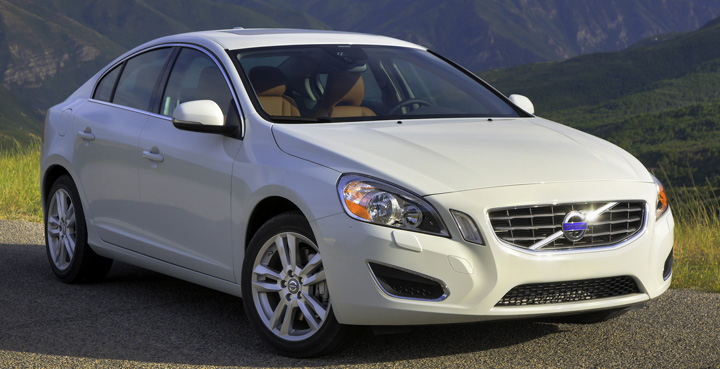 Acceleration: Volvo says the T6 R-Design does 0-60 mph in 5.5 seconds, versus 5.8 for the regular T6 AWD. Both claims seem quite credible. (FYI, Volvo quotes the 5-cylinder T5 as taking 6.4 with front drive and 6.6 with the optional AWD.) Near-zero turbo lag, lively throttle response and excellent passing power, enhanced by a crisp, smooth automatic transmission. These traits naturally pass to the R-Design, whose extra power comes simply from slight alterations to spark timing and turbo-boost pressure.

No matter. This is another of those still fairly rare cars whose powertrain elements are so well harmonized for normal driving that I felt no need to use the manual-shift mode—although I did try it and it works as one expects.

Ride Quality: The test car arrived on 235/40R18-95W Continental ContiSportContact 3 tires—the performance-oriented “summer” variety, if I’m not mistaken. Ride is definitely firm, but comfortable. I noticed no vibration or kickback through the steering on Arizona’s generally well-groomed pavement; just a little thumping, albeit muffled, on sharp bumps and cracks. A BMW 335i might be slightly more absorbent, but this Volvo deals impressively well with most any surface you’ll likely encounter. A super-solid structural feel enhances the “good ride” vibe.

Steering/handling/braking: With AWD and robust safety-minded construction, the S60 is a bit heavy for a “small midsize” sedan, and to me it doesn’t feel as agile in quick direction changes as a better-balanced rear-driver like the BMW 5-Series or Mercedes E-Class. Still, I uncovered no undue nose-plowing in tight corners—a nice surprise given the front-heavy weight distribution.

The selectable-effort steering is one of those “weasel” measures that chassis engineers sometimes resort to when they can’t agree on one “best” calibration—or are trying to make one car serve too many marketing masters. This also explains the available multi-mode FOUR-C suspension setup. Most drivers will probably never veer from the default “medium” setting, though I thought “low” was even better for mixed driving. The “high” position just requires more effort. But regardless of how much effort is dialed in, the steering feels wooden and remote, betraying the electric-motor power assist. No quibbles with the brakes, though.

Quietness: At least on Arizona pavement, I found road rumble rather modest; I expected otherwise with the tester’s “summer” tires. And that drone is noticed only because the straight-6 engine is generally so hushed and wind rush quite low even at highway speeds. The S60 may not be as serene as a Lexus GS or one of the German premium-midsizers, but it isn’t trying to be a sensory-deprivation chamber and I found it quite refined overall.

Controls: I agree that the center control area is busy, but that’s mainly because of the old-school keypad that Volvo retains for phone, data-entry, and other functions. On the other hand, please note the five—count ‘em, five!—old-school knobs for climate, audio, and vehicle settings. Brilliant! (So, too, the anthropomorphic “mimic” diagram for air distribution; just touch the button or buttons on the figure that correspond to where you want the air to flow.) I might think less of this setup had the available navigation been installed, but I don’t think so. One small quibble, though: The four largest knobs have divided centers, upper and lower, that were a little small for my fingers, which are not pudgy.

Details: I’d guess that many prospects will judge even the cabin of even the top-end R-Design too plain versus the bold blinginess of some S60 rivals, though I find the Scandinavian minimalism quite refreshing. The treatment may be simple, but it’s different—mature, elegant, and loaded with pleasing details such a convincing stitchwork and bountiful soft-touch surfacing.

Room/comfort (front): The R’s unique sports front seats may differ enough in side bolstering to feel a bit snug for some occupants, though I can’t be entirely sure about that in the absence of a side-to-side comparison (pun not intended—honest).

Room/comfort (rear): As noted above, the S60 is at the small end of the midsize-sedan spectrum, and that’s reflected in the relative deficits of headroom and legroom, the latter especially. A deal-breaker? Depends on your needs and tastes, but this package works for me.

Cargo room: I can’t say the trunk opening is “acceptably large.” It’s more like a mail-slot that precludes loading even moderately bulky hard-sided suitcases and such. With that and the trunklid’s deep back panel, packing and unpacking require a fair bit of stooping, a drawback if you’re prone to easy back pain.

CP Says . . . The T6 version strikes me as a fine alternative to the usual class suspects. In fact, it was better in many ways than I expected and disappointed in none. I imagine I’d like the T5 too, though I haven’t driven it yet.

A small observation: Volvo is clearly determined to preserve its traditional safety-first reputation, but is also working hard to shed its image as the fusty, non-conformist’s choice among premium and near-premium brands, a sales-deterring trait that contributed to the demise of fellow countryman Saab. As arguably the most un-Volvo Volvo ever, the S60 is helping improve the automaker’s bottom line, even if not as much as the top-selling XC60.

The wild card for Volvo’s future, I think, is the extent to which the public knows or cares about the company’s falling into Chinese hands. Volvo sales tanked in 2011 with news of the Geely takeover, but turned up in 2012, perhaps because buyers came to realize that Geely was going to let Volvo be Volvo, at least for the near term.

And then? As I see it, Geely needs to keep funding Volvo as a proud Swedish enterprise and leave the rest of it alone. Expand the lineup? Take the brand upmarket? Sure. Just don’t lose “Volvo-ness.”

Still, given how the global auto industry works now, China-made Volvos are bound to land in U.S. showrooms sooner or later. Would that be a bad thing? It depends on how Geely handles that and many other issues. For Volvo’s sake, let’s hope they know what they’re doing.