Kia made its statement at the 2012 Los Angeles Auto Show by revealing updated versions of its Forte compact sedan and Sorento midsize SUV.

The 2014 Kia Forte sports a brand-new look, with cues inspired by the brand’s Optima midsize sedan. The car is longer, lower, and wider than the outgoing model, and it has a roomier interior and more available power.

Forte will follow Kia convention by offering base LX and uplevel EX trim levels. There was no mention of a sporty SX, though we wouldn’t be surprised to see one appear at one of the 2013 auto shows. Standard amenities include steering-wheel audio controls, satellite radio, a Bluetooth wireless cell-phone link, and the usual complement of power accessories. Cruise control and remote keyless entry are optional, as is an Eco Package that includes dual-zone automatic climate control and engine idle stop/start.

The EX adds a rearview camera, a cooled glovebox, and the next generation of Kia’s UVO infotainment system. Options include a navigation system, leather upholstery, heated front and rear seats, a cooled driver seat, a sunroof, and keyless entry with pushbutton engine start.

The 2014 Kia Forte arrives at dealers in early 2013. Pricing will be announced nearer that time.

It might not look too much different, but the 2014 Kia Sorento receives a host of updates. Kia says the chassis is new and 18 percent stiffer than the 2011-2013 model. This should translate to a smoother ride and better handling. Also added to the lineup are a new V6 engine and a top-tier trim level. Sorento will seat up to 7 passengers.

Returning for 2014 are the base LX, volume EX, and sporty SX. New is the top-line SX Limited, which is the second Kia vehicle to receive this designation (the first was the 2012 Optima SX Limited).

Standard on the LX and EX is a 191-horsepower 2.4-liter 4-cylinder engine. Optional on those models and standard on the SX and SX Limited is a new 290-horsepower 3.3-liter V6, borrowed from the 2013 Santa Fe produced by Kia’s corporate parent, Hyundai.

Sorento’s redesigned interior includes a new instrument panel with a 7-inch LCD display that projects a digital speedometer between an analog tachometer and fuel and engine temperature gauges. This will also be Kia’s first vehicle to offer a blind-spot-alert system.

Available features will include a navigation system, heated and cooled front seats, and the latest generation of Kia’s UVO infotainment. Included on the SX Limited are high-end Nappa leather upholstery, a heated steering wheel, and heated rear seats.

The 2014 Kia Sorento arrives at dealers in the first quarter of 2013. Pricing will be announced around that time.

CG Says: We admit that we were not overly impressed with the first-generation Kia Forte. It struck us as a bit too rough around the edges, especially since the competition was introducing more solid and refined products. Kia appears to have listened and endowed the 2014 Forte with a sense of style and a host of available premium features. If the company can nail down the suspension tuning (long a Hyundai/Kia sore spot), and deliver better fuel economy (a more recent Hyundai/Kia sore spot), this could become a Forte to be reckoned with.

Though it doesn’t look too much different, the 2014 Sorento boasts a number of changes. The stiffer chassis should improve the ride, and the revamped interior looks quite nice. The new Limited model is reinforcing Kia’s commitment to moving its products upmarket. The Optima Limited is proving to be a surprising success, so it’s only natural that the company will want to try it on its best-selling vehicle. 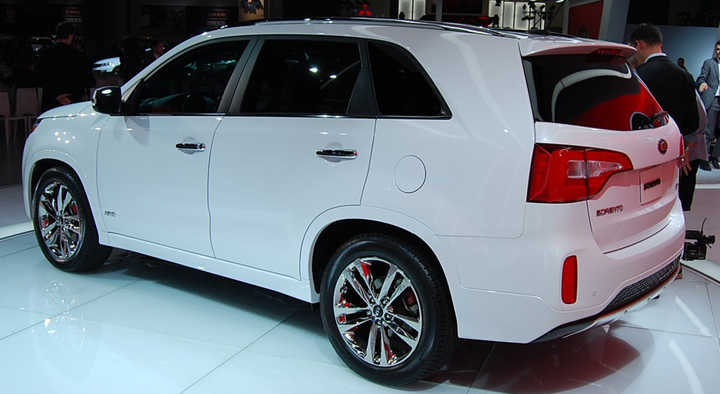