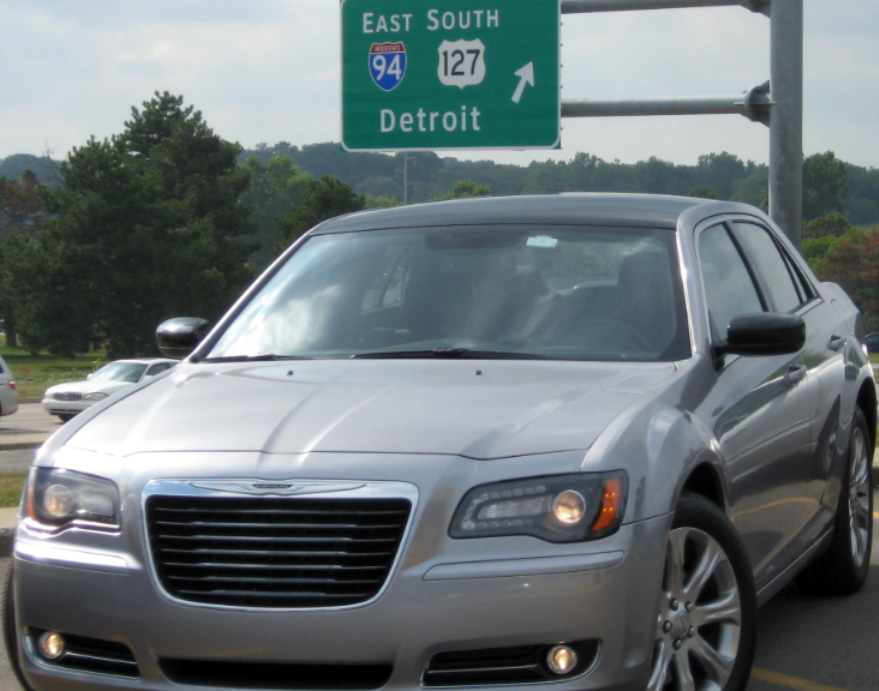 Rick’s ride to Michigan was this Chrysler 300 Glacier

Compared to most people, I do quite a lot of highway driving. Unlike most people, I usually do it in silence. That would probably bore most folks on the bi-weekly, two-hour trek down to my weekend farmette, but for me, it’s a welcome chance to clear my head and think about things that matter … like how I’d spend the vacation time I rarely take. But that quiet can become lonely on a trip as long as that from Chicago to Detroit.

But for longer drives, I have a different strategy. Before I even leave the garage, I plug in my stone-aged MP3 player (I am seriously tech resistant) that contains a collection of favorite road tunes and crank up the volume. Ready to travel from Chicago to Detroit.

This particular trip is taking me to Ann Arbor, Michigan, and my steed for the journey is a Chrysler 300 Limited in V6, all-wheel-drive form. This was not an arbitrary choice. The 300 is a great long-distance road runner, and the eight-speed automatic that’s new for 2013 (replacing a six-speed) promises even better highway fuel economy. So I settle into the comfy seats (already dialed in to my favorite driving position with help from the power lumbar support) and head out toward the Kennedy Expressway that will take me south through Chicago.

The opening musical salvo is Life is a Highway from the movie, Cars. This jaunty tune always gets me pumped, and my fingers instinctively pluck the back of the 300’s meaty, leather-covered steering-wheel rim along with the throbbing bass track. Frankly, I have lousy taste in music.

A couple miles from my house, I hit the Kennedy on-ramp and nail the gas. There is no noggin-slapping, “Coulda had a V8” moment here; the V6 provides plenty of punch. I sail down the ramp and … stop. 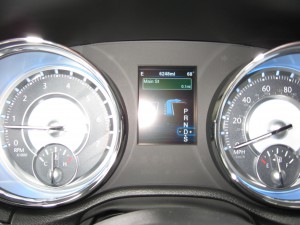 The Kennedy “Expressway” is doing its best imitation of a four-lane parking lot. It’s times like this when I want to stand at the side of the road and ask the drivers creeping by what in the world they’re all doing heading downtown at 2:15 on a weekday afternoon. The MP3 has progressed to my second selection, “I Want to be a Rock Star,” its continuous, fast-paced lyrical stream seemingly the work of Aaron Sorkin—if he were a poet. But right now, what I really want to be is not on the Kennedy.

A little farther down the road, the semi to my left turns on its blinker to get in my lane, seemingly so it could get off at the next exit on the right. REO Speedwagon was warning me, Don’t let him go, but I did anyway—and ended up staring at the business end of a trailer for the next few miles.

That’s hardly the type of scenery I’d ideally like to view while creeping along, but many years ago, I developed a couple of car games for just this type of situation: “Guess who’s driving,” and “What were you thinking?!?”

The first is guessing who the driver of a car might be just by looking at the car itself. Ahead on the right is a sky blue Volkswagen New Beetle convertible with the top down, and I can see long, curly hair blowing in the breeze. Seems like a no-brainer, but as I draw up alongside … it’s a middle-aged guy. Rats. A bit later, I come up on a screaming-yellow Fiat 500. My guess is not the rather large fellow behind the wheel. (For some reason, it reminds me of Daniel Craig’s 007, who spent the entire Skyfall movie in too small a suit.) 0 for 2. Like a batter, I hate to be behind in the count, so I look for the easy marks.

In my rearview mirror, I spot a black BMW weaving through traffic, cutting people off. “Yuppy businessman in a suit talking on his cell phone” is my guess. As he passes, a slow smile spreads across my face. Until he cuts me off.

On a roll now, I look to quickly even the score by searching for The Sure Thing: a big, light-colored Buick, almost invariably driven by an old man in a hat. Two lanes over, I spot a gold one. As I pull up alongside … bingo. Content with batting .500, I move on.

“What were you thinking?!?” was developed shortly after I started at Consumer Guide back in 1990. At that time, several cars struck me as simply having no reason for being—and thus, no reason for being bought. (“Really? An Isuzu Stylus? What were you…”) But among cars built in the last few years, I can’t think of any that don’t have at least some redeeming qualities, so it was getting harder and harder to dish out justifiable ridicule. Thankfully, however, we now have paste-on front-fender portholes, so the game continues.

There were numerous traffic jams on my way out towards Detroit – mostly due to construction – but at last I found myself on the open road. While my general rule is that I don’t talk on the phone while driving, I sometimes do when I’m on a rural highway with little traffic. So when my cell phone rang, I answered.

It was a friend calling to see what I was doing. When I told her I was driving, she asked incredulously, “You mean you’re in the car?!?” Although I first took this to mean she was surprised I even answered, it turns out that her surprise was due to a lack of background noise. “Most times, the sound of the car nearly drowns out the conversation,” she explained. “I don’t hear any background noise at all.” Which only served to underline the fact that the 300 is a very quiet cruiser. 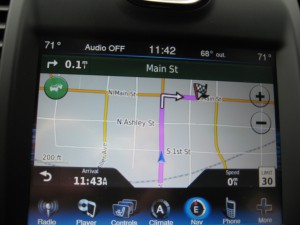 Is it more interesting that Rick reached his destination in Ann Arbor, or that he had the heat on?

While in Ann Arbor, I got lost trying to find the restaurant where the meeting (the whole purpose of the trip) was taking place. While I’d done a Google Maps search before I left, I got turned around, and the printed directions weren’t going to get me there. At least, not before lunch. So I switched the 300’s infotainment screen to the NAV setting–rare for me, as I loathe engaging the infotainment system.

We’ve long been fans of Chrysler’s UConnect system, and this experience was a clear indication of why. While some navigation systems can be tricky to program with a destination, doing so with UConnect is easy. Furthermore, it gives verbal directions with street names, which not all do. Many simply say, ”Turn right in 1000 feet,” which isn’t always explicit enough, particularly in a city environment. It also displays the turn diagram on a small screen between the speedo and tachometer right in front of you, which is really helpful. And best of all, I didn’t even miss the appetizer.

Sometime during my return trip, Jackson Browne’s Running on Empty prompted a quick (and slightly panicked) check of the fuel gauge. By this time, I’d traveled 300 miles, yet the needle indicated there was still more than 1/3 of a tank left. After briefly considering trying to make it back to Chicago without refueling, the memory of all those traffic tie-ups (plus the shoulderless stretches of Chicago’s infamous Dan Ryan Expressway) made me stop. By that time, there were 330 miles on the clock, and I put in 13.4 gallons. That works out to an average of 24.6 mpg – quite impressive considering all the stop-and-go driving it included. Thankfully, there was only one brief backup on the way home, with clear sailing the rest of the time. Note that in Michigan and Indiana, “clear sailing” means the flow of traffic is traveling somewhat in excess of the 70-mph speed limit, and far be it from me to impede the flow of traffic. Yet in the end, a 10.1-gallon fill over the 265-mile stretch netted 26.2 mpg.

Taking into account the far-less-than-ideal driving during this trip from Chicago to Detroit, my overall average of 25.25 mpg in a two-ton car with all-wheel drive suggests the new eight-speed transmission wasn’t a waste. However, the powertrain picture isn’t entirely rosy. In our test car, at least, throttle response from a stop wasn’t always linear (odd, because we hadn’t noticed any problem in an earlier Dodge Charger with the same powertrain), and transmission kickdowns were sometimes delayed. Furthermore, the toggle-switch shifter takes a bit of getting used to, particularly when going from drive to reverse. But overall, the V6-powered 300 Limited with all-wheel drive proved to be a terrific partner in this jaunty journey from Chicago to Detroit.

Through Horse Country in Our Long-Term Pathfinder