Yes, it is Fast: Driving the 2014 Chevrolet Corvette 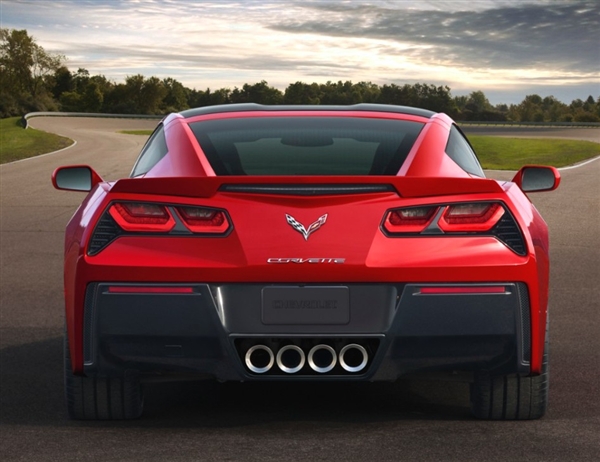 Per Rick, you might want to get used to this view of the new Corvette. Few cars, no matter the price, are going to win a stoplight challenge against Chevy’s latest sports car.

For more background on the new Corvette, click here.

While our first post on the redesigned 2014 Corvette Stingray dealt mostly with background, stats, and descriptions, this one focuses on the driving experience. Which, when it comes right down to it, is the primary point.

Although some past versions blurred this image somewhat, the Corvette is first and foremost a performance car. Perhaps because of some of those past versions – which veered toward being more of a “boulevardier,” probably due to the strangling emissions regulations of the time – the Corvette is sometimes viewed by sports-car elitists as somewhat … well … gauche. But they would be well advised not to express that opinion at a stoplight.

The truth of the matter is, this latest C7 generation of the Corvette is in a performance league where few other cars can play. And most of those that do cost multiples as much.

While other engines and engine locations have been considered throughout the years, the Corvette retains its traditional (some might say “old fashioned”) front-mounted, normally aspirated, overhead-valve V8. Say what you will, but this combination works. The venerable small block has been updated with some modern features such as direct injection, variable valve timing, and cylinder deactivation (“Active Fuel Management” in GM parlance), but it’s still a two-valve engine when virtually every economy car on the market boasts a more modern and sophisticated double-overhead-cam, four-valve design. But the end result is that the new LT1 V8 provides gutsy low-end torque, instant throttle response, linear power rise, and a booming to screaming exhaust note, all of which helps make the new Corvette extremely satisfying to drive. 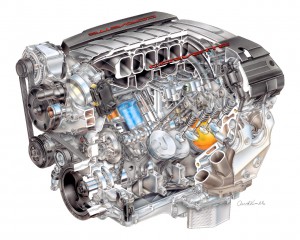 There are other cars not far north of this price class that offer more horsepower, but most aren’t as good at getting it to the ground. These cars also use a front-engine/rear-drive layout, which means the (often considerable) weight of the powertrain resides at the opposite end of the car than the wheels that put power to the pavement. While the Corvette would seemingly suffer the same affliction, it counters it by having the engine set far back in the chassis (which can be done because it has no rear seat), and the transmission mounted in the rear. Also helping is that the rather large hood is made of lightweight carbon fiber, which takes several pounds off the front end. The result is a near-50/50 front/rear weight distribution (actually a bit of a rear bias), which not only aids traction, but also cornering power and ride comfort.

While at least the manual-transmission version can burn its rear tires with the best of them (as demonstrated by a cohort lacking my considerable degree of restraint), any good drag racer knows that “smokin’ the wienies” makes for great show but little go. So launches are probably quickest with the traction control engaged or by using great care. According to Chevrolet, doing it right in a Corvette with the optional Z51 Performance Package can net a 3.8-second 0-60 time and a 12.0-second quarter-mile at 119 mph. But more than that, the 2014 Corvette just has power everywhere in the rev range and nearly instant response to throttle inputs.

Buyers have a choice of a seven-speed manual transmission or six-speed automatic. The manual snicks through the gears with precision and the clutch is easy to modulate. New for 2014 is a rev-matching feature that blips the throttle during downshifts to make for smoother deceleration when braking into a corner; you can turn it off it you want to, but it’s really helpful when you’re hurrying. About the only complaint we could voice is that some might find the shift linkage to be positioned a bit too far rearward, so selecting the even gears can result in your right elbow hitting the seat bolster.

The six-speed automatic shifts smoothly or sharply depending on how deeply you’re dipping into the throttle, and it downshifts smartly for more passing power. Steering-wheel paddles allow you to pick your own gears. According to Chevrolet, the acceleration figures quoted above apply to automatic versions of the Z51 as well, so there’s no performance penalty for the self-shifter.

Another benefit of the even weight distribution is improved ride and handling. Since all the tires carry an equal amount of weight, they don’t get as overloaded when the car’s weight shifts under acceleration, cornering, or braking. The Corvette’s five, driver-selectable modes (Weather, Eco, Tour, Sport, and Track) adjust a number of different parameters, most notably shock firmness, steering feel, and exhaust note (plus shift programming with the automatic). We found Tour to be the best choice on the (surprisingly) rough roads encountered on our test-drive loops, though Sport mode brings only a bit more firmness and a much sportier exhaust note. Ride was a bit stiff over bumpy patches even in Tour, but not nearly what one might expect given the handling capabilities. It’s this balance of sportiness and everyday livability that makes the Corvette an unexpected joy to drive even when quick corner-carving isn’t on the menu.

While “performance” is certainly a primary element in a sports car, it’s not the only focus of the Corvette. As has been the case with numerous competitors, the C7 has made strides in cabin appointments and driver comfort as well.

One long-standing complaint among some sports-car aficionados has been that the Corvette has become too big and porky. As such, it was a bit surprising when it was brought up that the C7 is virtually the same length as a Porsche 911. However, the Corvette is also somewhat wider and lower, which may make it appear to be larger.

While “low” is usually a positive attribute in a sports car, it poses some problems in the Corvette. Since the roof and seat cushion are closer to the ground than in most other cars, getting in and out – even for folks of average stature – can be challenging. You don’t “get in” a Corvette as much as you “drop in.” And by the same token, you don’t “get out” as much as you “climb out.” This is aggravated in tight parking spaces, as the wide doors – which are attached to a wide car – can’t be opened far enough to make a large portal.

Once situated, the environment is … cozy. Taller folks may wish for more legroom, but regardless of size, both the driver and – more so — the passenger will find that the wide center console limits side-to-side knee room. Visibility is okay to the front and sides, but anything back much past your shoulders gets at least partially hidden by seat headrests, roof pillars, or the tall tail. There are small rear quarter windows that help, but the view back is still quite restricted.

Like most other cars, the Corvette has gone “high tech” inside. We described the various materials, gauge-cluster choices, and infotainment features in our previous post, so we won’t repeat those here. But suffice it to say that the Corvette isn’t the bare-knuckled street brawler it used to be.

And if I had any complaints about the new C7, it would be that. Although I’ve heard numerous accounts of how buyers now want all the modern luxury and tech features even in focused performance cars (the Viper folks insist that’s why the latest version comes virtually loaded to the gills), I have to believe that there are those who would like to see a version that adhered to the KISS principle. Take out the adjustable suspension and allow buyers to choose between a Tour, Sport, or Track setup. Just make the loudest legal exhaust standard. If feasible, replace the ritzy interior materials with more basic ones. And most of all, bring back a simple, traditional gauge cluster and audio/climate controls, and make a limited number of popular tech features (such as Bluetooth) available as options. Then, for good measure, call this “stripped” model the Grand Sport, which originated as a sports-racing version of the Corvette back in its glory days of the ‘60s. All of this would serve to pare off both pounds and price, which is never a bad thing in a sports car.

If I’m alone in this view, let me know. But if not, let me know that, too. After all, if history is any indication, the C7 generation will likely carry on for close to a decade, and that leaves plenty of time for Corvette’s engineers to right any wrongs.