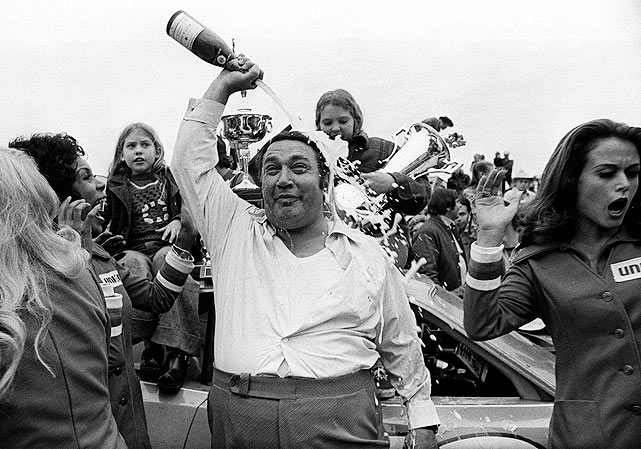 Andy Granatelli, who died December 29, was a larger than life figure in the business and racing worlds.

In a colorful life that came to an end on December 29, Andy Granatelli thoroughly blended a passion for cars with the promotional savvy of a master showman. It was a combination that made him one of the most memorable characters in racing—and marketing—in the last 50 years.

As president of the STP Division of the Studebaker-Worthington holding company starting in the early Sixties, Mr. Granatelli soon made the red-oval logo of the fuel and oil additives ubiquitous, seen on everything from championship-caliber race cars to high schoolers’ $250 rust-buckets. (In 1964, he dressed the pit crews for his Indianapolis 500 entries in white coveralls liberally adorned with STP logos and personally paraded his stout frame through the Indy pits in a business suit of the same design.) As noted in a profile published in the April 1996 issue of Collectible Automobile®, Mr. Granatelli “dreamed up the ‘Racer’s Edge’ slogan, handed out some 70 million STP decals, starred in STP’s broadcast commercials (including a TV spot with a sumo wrestler), and established Granatelli Indy cars as the cornerstones of STP advertising.” The result was a meteoric rise in company revenue by 1971—even if questions about the efficacy of the stuff began to creep in.

This revved-up marketing plan was no flash in the oilpan, however. Long before he began stumping for STP products, Mr. Granatelli had developed a flair for promotion. In the late Forties, when he and his brothers Joe and Vince were operating a speed shop on the Chicago’s North Side, Mr. Granatelli performed dirt-track exhibitions in a “rocket car:” a customized roadster with a hopped-up Ford “flathead” V8 and eight military-surplus aircraft takeoff-assist rockets that he would fire as he lapped the track. It made for sparking good theater even if it did nothing for performance. In 1947, the Granatelli brothers began promoting circle-track hot rod races at Soldier Field. They put the “act” in “action” by hiring ringers who would seemingly lose control, triggering gasp-inducing on-track pileups.

Beyond the showmanship there was a genuine interest in performance and racing, however. The brothers’ Grancor shop not only served as a mail-order distributor of others’ equipment but sold their own parts and modified Ford V8 engines. Then, too, there was their fixation with the Indy 500.

Mr. Granatelli is perhaps just as famous for his failures at the “Brickyard” (the stunning late-lap retirements of race-leading turbine-engine cars in 1967 and ’68) as he is for his successes (race wins by STP-sponsored Mario Andretti in 1969 and Gordon Johncock in ’73). He and his siblings first entered a car in the 500 in 1946. Two years later, Mr. Granatelli was severely injured in a qualifying attempt at Indy. A decade later, after Mr. Granatelli bought supercharger manufacturer Paxton Products, he and his brothers snapped up what remained of the admired but unsuccessful Novi cars. They spent the next few years trying to turn the Novi V8 into an Indy winner with the help of a supercharger, to no avail. That was followed by the Pratt & Whitney turbojet-powered cars—the “Whooshmobiles” that scared hell out of the racing establishment, which couldn’t move fast enough to find a way to outlaw them. With Johncock’s 1973 victory, followed soon by Mr. Granatelli’s ouster from STP, he finally stepped away from the racing world.

A native of Dallas, Texas, Mr. Granatelli retired to Santa Barbara, California, where he died of congestive heart failure. He was 90.