Are contemporary midsize trucks really full size? The chart below suggests the lines have blurred.

When convenience-store chain 7-11 introduced the Big Gulp fountain-drink cup in 1980, many consumers were scandalized by the container’s 32-ounce capacity. Indeed, the quart-size cup seemed massive compared to the 7-ounce returnable bottles Coca-Cola once charmingly considered a single serving. Shoppers got past their large-cup apprehension soon enough, however, as 7-11 would soon roll out 48-ounce Super-Big-Gulp and staggering 64-ounce Double-Gulp containers.

The more-is-better movement is likewise evident in the world of home entertainment. In 1990 the average TV set sold featured a 25-inch screen. For 2015, the average screen will run about 45 inches. 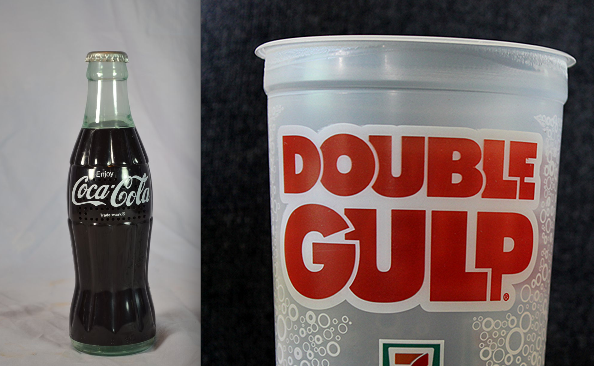 Hydration inflation? A single serving of Coca-Cola was once as little as 7 ounces. The 64-once 7-11 Double Gulp would have refreshed a party of 9 folks back in the day.

It should come as no surprise then that our pickup trucks are growing larger, too. For a long time pickups were divided into two size classes: compact and large. And, back in the day of the Chevrolet LUV and Ford Courier, what we called compact trucks were truly small. But it became necessary sometime in the past 10 years to begin calling compact trucks midsize trucks as they began packing on inches–and pounds.

A number of factors contributed to the growth of our small trucks. As prices rose in response to demands for increased levels of safely and convenience equipment, consumers demanded more truck for that money. Additionally, consumers increasingly used the small trucks as family vehicles, and saw value in the additional leg and shoulder space.

So, how big have small trucks gotten? Astonishingly, big enough to have been considered large trucks back in 1990, at least in the case of the new-for-2015 Chevrolet Colorado.

Though significantly smaller than the full-size 2014 Chevy Silverado, the Colorado comes within striking distance of the 1990 Silverado in several key dimensions.

But don’t take our word for it; check out the chart below. In each case, the specifications listed are for rear-drive extended-cab models with the shortest bed available. Likewise, the listed fuel-economy numbers are for the smallest available engine. In the case of the 1990 models, those numbers are for trucks equipped with a 4-speed manual transmission, while the 2014 Silverado EPA numbers are for a truck with a 6-speed automatic. 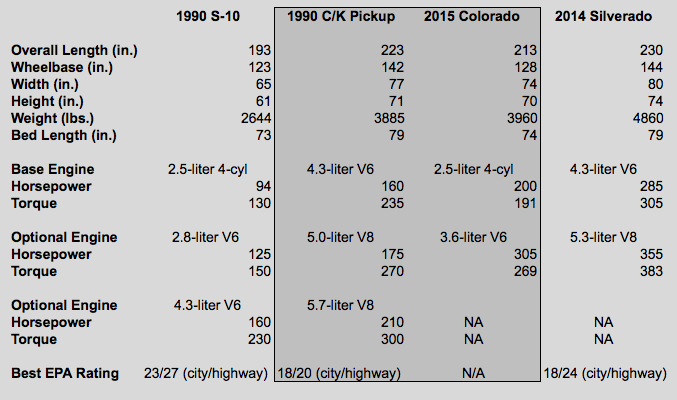