The new-for-2015 Chevrolet Colorado (left) and GMC Canyon (right) are differentiated more than in the past – and in more than just appearance – as the Canyon is being marketed as a decidedly upscale offering.

Five years ago, the compact-pickup segment consisted of a dozen different members. Since then, the contenders have grown to “midsize,” and the count has dwindled to three.

There are a number of theories. One is that the manufacturers’ “bigger is better” approach left too little room – in size, price, and fuel economy — between the new crop of midsize pickups and the more established full-size ones. And since the latter accounted for far more sales – and tremendously more profits – they garnered more attention and more frequent updates. Before long, the technological gap between midsize and full size was huge, but the price difference wasn’t.

Since 2012, the three midsize survivors have been the Toyota Tacoma, Nissan Frontier, and Honda Ridgeline. As the last was only offered as an all-wheel-drive crew cab with a 5-foot bed, it covered the strongest part of the market, but hardly the bulk of it. And the Frontier didn’t offer a traditional regular cab, which by then had shrunk to only about 10 percent of a market that itself had substantially “downsized.”

The base Colorado dashboard (left) carries a smaller touchscreen and less-lavish trim than the one that greets top-line GMC Canyon customers (right).

GM had been in the compact-pickup game since the early 1980’s with the Chevrolet S-10 and nearly identical GMC S-15, but had pulled out after 2012 when combined sales of the Chevrolet Colorado and GMC Canyon (which replaced the S-10/S-15 for 2004) couldn’t manage 50,000 units a year – and hadn’t reached that mark for some time. But with the decreased competition in this segment and the escalating prices in the full-size one, GM decided to jump back in.

In many ways, the timing couldn’t have been better … though some of that was due to plain dumb luck.

As it so happens, Honda pulled the plug on the Ridgeline earlier this month, eliminating a 2015 competitor in the meat of the market — the 4-wheel-drive crew cab – leaving a void GM is amply equipped to fill. 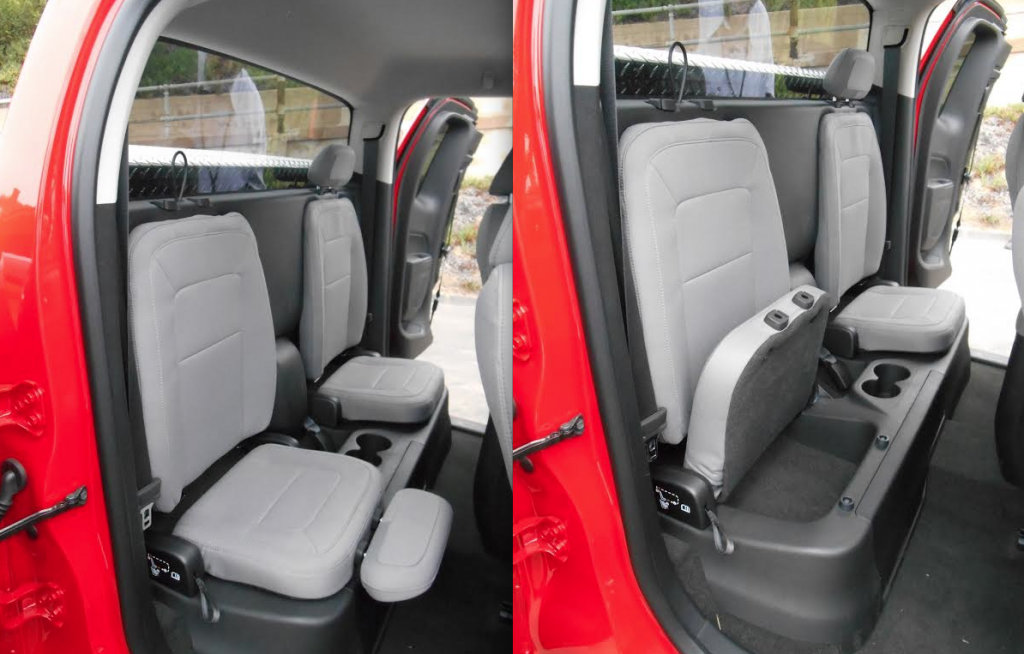 Extended-cab rear jump seats don’t offer much passenger legroom, but their cushions fold up to reveal a “hidden” storage bin underneath, and they’re specially designed to easily accommodate a child seat – in part by being able to store the headrest in the seat cushion (which also improves rear visibility).

The redesigned Chevrolet Colorado and GMC Canyon, which are going on sale now, are based on a pickup GM has recently been selling in other countries. But neither U.S. model actually shares much with it, as styling and some body panels are unique, as are the interior, powertrains, and some chassis components. They’re somewhat bigger than their former selves (and their Nissan and Toyota rivals), but GM notes that compared to full-size trucks of the same body style (ie, crew cab short bed), the new “midsizers” are about a foot-and-a-half shorter, six inches narrower, and three inches lower. Marketers note that this makes them much easier to slot into a garage or parking space, something they feel might appeal to big-pickup owners who found they really didn’t need full-size capability. 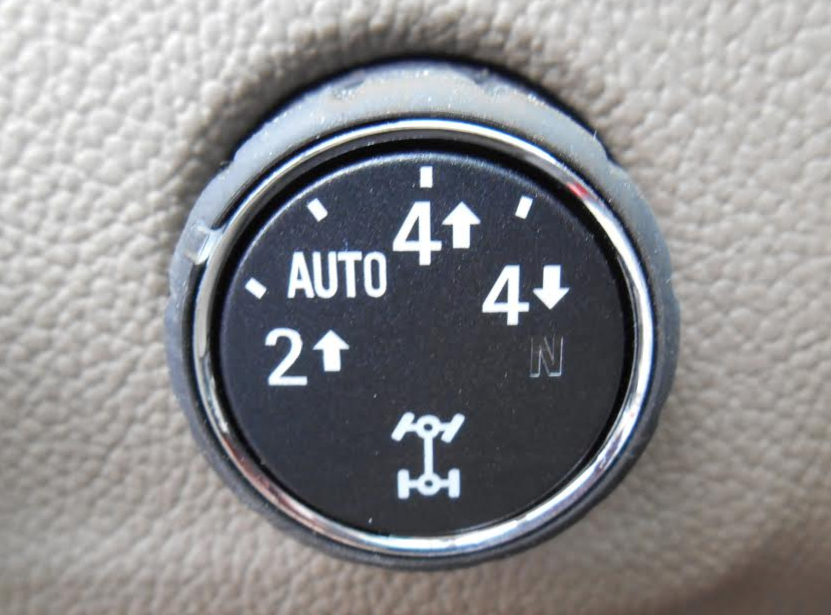 Four-wheel-drive versions of the GMC Canyon have an “Auto” (full-time) 4WD setting, which allows 4WD to be left engaged on dry pavement – a convenience no other midsize truck currently offers.

Unlike the previous versions of the Colorado and Canyon, the new ones don’t offer a regular cab, nor do they carry their predecessors’ “truck exclusive” four- and five-cylinder engines. Instead, they come only in extended- and crew-cab body styles with engines sourced from the existing GM parts bin. These include a 200-horsepower 2.5-liter four and a 305-horsepower 3.6-liter V6. Both can be mated with 2- or 4-wheel drive and a 6-speed automatic transmission; the four is also offered with a manual transmission in rear-drive, extended-cab configuration. As might be expected, that last is the “price leader,” which in Colorado form comes in at just under $21,000 including destination.

Far more so than with their former selves, the Colorado and Canyon are differentiated not only with styling – which is more “differentiated” than before – but also with features. Most significantly, the GMC Canyon exclusively offers a soft-touch instrument panel (in all but the base version) and available full-time 4-wheel drive (Colorado offers only a part-time system). With the demise of the Honda Ridgeline, which had full-time all-wheel drive, those two features are now also class exclusives.

And those aren’t the only “class exclusive” features offered on the new Colorado and Canyon.

Partly because the remaining members of this class are quite old (the Nissan Frontier was last redesigned for 1998, the Toyota Tacoma for 2005), they are somewhat dated when it comes to modern safety, comfort, and convenience features. As such, it wasn’t hard for GM to leapfrog the competition in terms of amenities. On the safety side, a rearview camera and GM’s OnStar assistance system are standard, and options include forward collision warning and lane departure warning. Meanwhile, available comfort and convenience features include remote start, power lumbar adjustment for both driver and front passenger, leather upholstery, automatic climate control, and heated seats. Available connectivity items include an 8-inch touchscreen, satellite radio, navigation system, voice recognition, Siri Eyes Free (for those with iPhones), and text-message alerts. 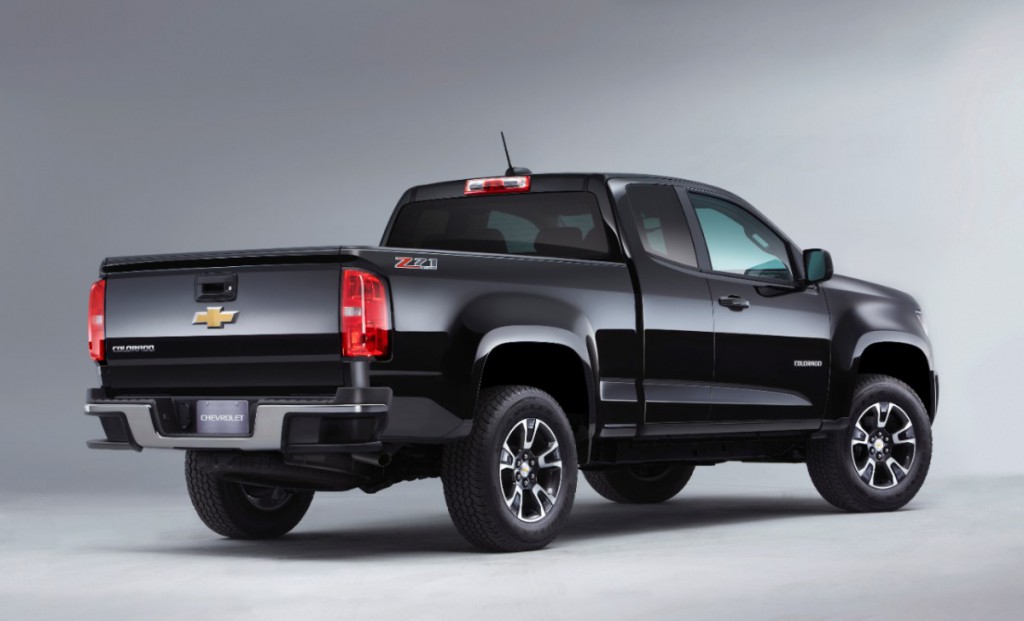 A Colorado extended cab shows off its rear step bumper and easy-open-and-lift tailgate, both class exclusives.

GM also put effort into providing a stout structure and quieter ride. The box-section frames (as used in full-size trucks but rarely in midsize ones) suffer less torsional twist, thereby providing a more solid platform, and numerous sound-deadening measures have been taken. Indeed, the trucks seemed solid and quiet over the San Diego streets driven during the preview – though our rougher Chicago-area roads will be a better test – and there was only a whisper of wind noise at highway speeds.

Local roads will also be a better indication of ride quality, which seemed solid and reasonably compliant, though still with some of the “nervousness” over bumps that is endemic to pickups. Handling and steering were both perhaps a step above the class norm.

The 4-cylinder engine provides sufficient oomph, at least with automatic transmission in a 2WD extended cab. The V6 is noticeably stronger, and though it doesn’t catapult the truck off the line, acceleration is more than adequate. With both, the transmission kicks down very quickly for more passing power.

There’s ample headroom and legroom in the front seats, even for taller folks. But the same can’t be said for the rear seats. The extended cab offers just two forward-facing jump seats, and unless the front seats are well forward, even kids would lack legroom back there. The crew cab is much better – and can accommodate adults – but it’s hardly roomy. Furthermore, even the 2WD models tested sat rather high off the ground, making ingress and egress a bit awkward for all but taller adults. 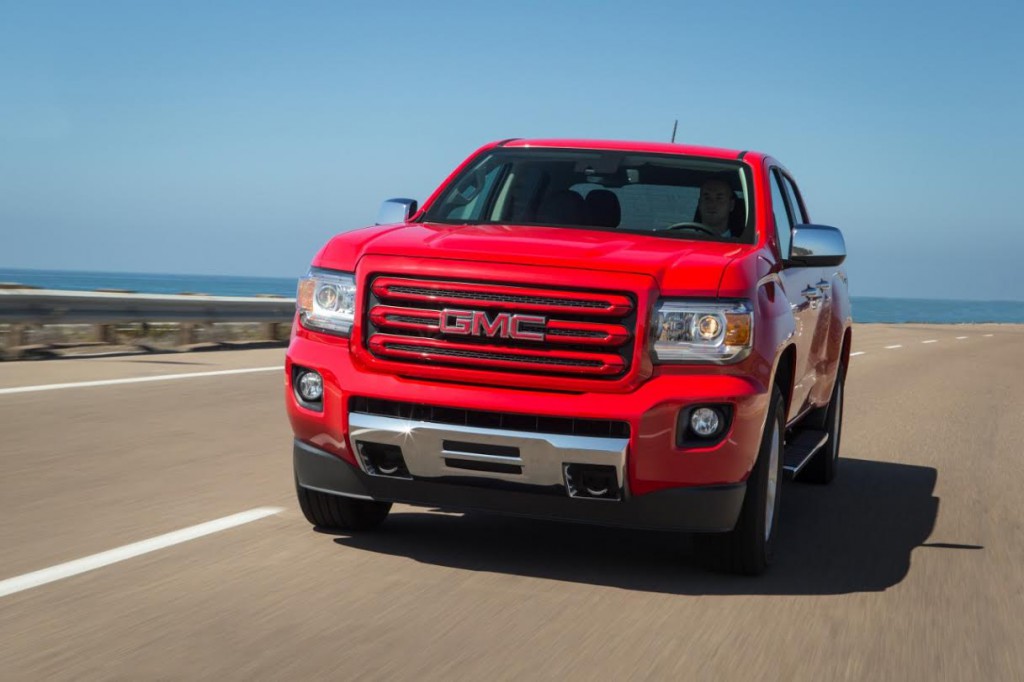 A sporty body-colored grille is optional on the GMC Canyon, one of several features it doesn’t share with its Chevrolet cousin.

Once inside, drivers face a somewhat stylized dashboard with clear round gauges and – on all but low-line models — a central 8-inch touchscreen. The audio system is mounted high within easy reach; volume and tuning are by separate knobs, with band and station selection done through the screen. Like many such systems, some operations that used to be “one touch” simple now require multiple steps. Climate controls are likewise easy to reach, but are even easier to use. Temperature and fan speed are adjusted with rotary knobs, while mode is by individual pushbuttons.

Visibility differs by body style. In both cabs, it’s fairly good to the front and even better to the rear corners. But side pillars that are already rather thick in the crew cab are far thicker in the extended cab, which makes it very difficult to see anything to the side of the truck.

As mentioned earlier, all but base models of the Canyon feature a soft-touch dash that’s hard plastic on the Colorado. Upper-line Canyons also have more-colorful instrument-panel displays and somewhat nicer trim, all in accordance with their somewhat higher prices. Regardless of make, door tops are hard plastic (which can be a bit disappointing to your outside elbow), but interiors are dressed with bright accents and available two-toning that gives an upscale appearance – at least by “truck” standards. 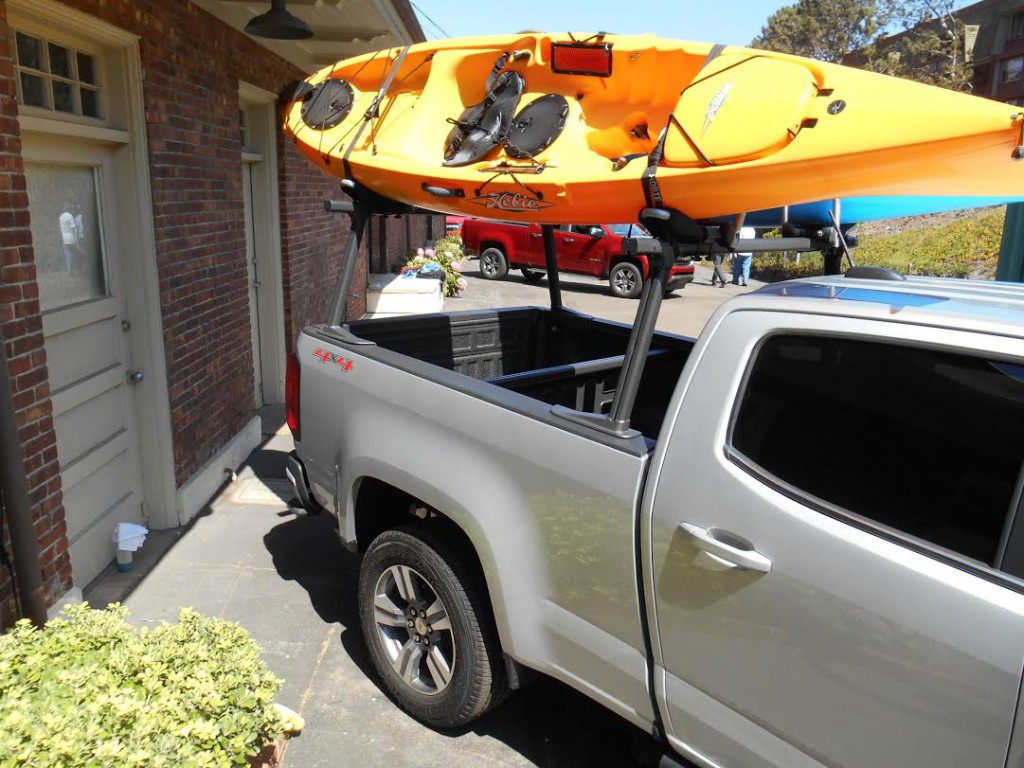 Custom-designed cargo racks can be purchased through dealers, thus adding their cost to any monthly payments.

At the business end, both GM trucks offer a decidedly user-friendly cargo box. Not only are there four “solid” tie-down hooks, there are also 13 ports that can hold additional hooks, and there are optional racks for such things as bikes and kayaks that can be purchased through the dealer. Also nice is a damped, easy-open (and lift) tailgate, along with a step built into the rear bumper.

In what’s left of the midsize-pickup market, the Colorado and Canyon stand out as being more refined and offering modern features the others don’t. The Canyon further distinguishes itself with its class-exclusive full-time 4WD (a great convenience in the snowy north) and upscale ambiance. Add to that the fact these two GMers are also very competitively priced, and it’s clear the segment is no longer being overlooked.