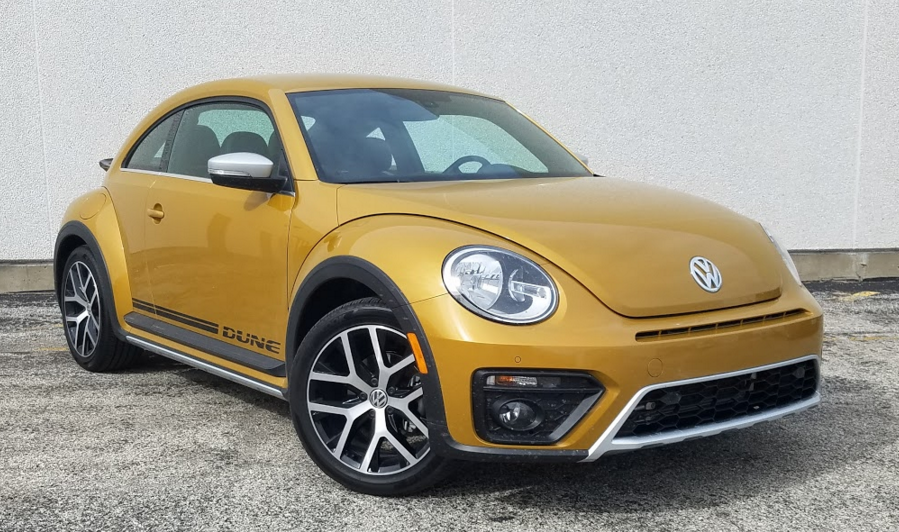 The great: Unique character, both inside and out

The good: Powertrain performance, good passenger and cargo space for the class

The not so good: Rear seat room and trunk space still tight 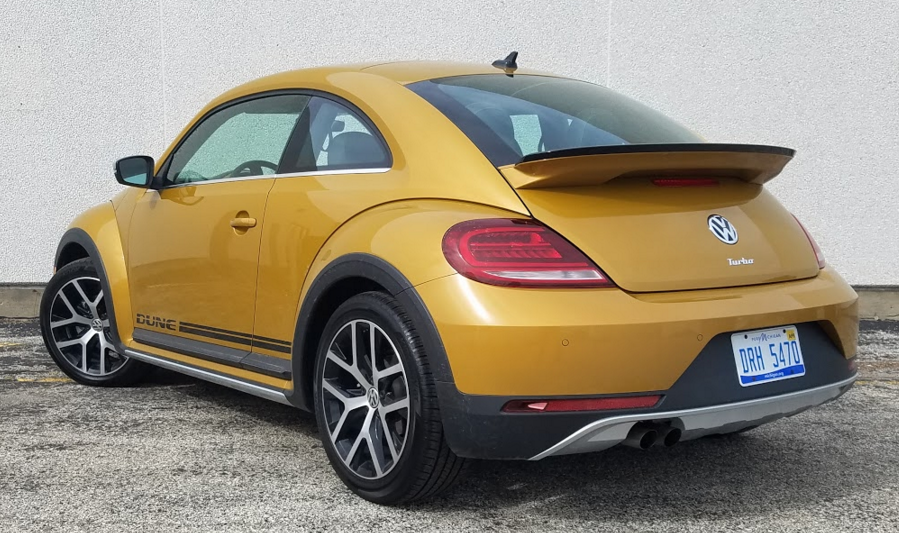 Dune gets unique black fender flares that accent its racy wheels, rear spoiler, side I.D. stripes, and raised ground clearance. The Sandstone Yellow Metallic paint is offered only on the Dune, which is also available in white and black.

Volkswagen says the Dune was inspired by the Beetle-based Baja Bugs of the 1970s, which had trimmed front and rear bodywork and higher ground clearance, ostensibly for traversing sand dunes. While the association might be a bit of a stretch, the Dune is available in exclusive eye-popping “mod” Sandstone Yellow Metallic paint (though white and black are also offered) and features some off-road styling elements (mostly black fender flares), and an increased ride height (but only by a bit). Still, it all adds up to a Beetle with even more character, a feat that takes some doing.

We tested a very similar 2016 Beetle Dune last year and found it to be a surprisingly likeable and even practical conveyance, and the 2017 version is little different. The 170-horsepower 1.8-liter turbocharged engine provides fine performance, the ride/handling balance is about as good as front-drive cars get, the infotainment system is far easier to use than most nowadays, and there’s decent room for passengers and cargo, at least when compared to many sporty/performance cars. The most significant changes for 2017 are that a convertible version has been added (starting at $29,395), while the previously available manual transmission has been dropped (making the 6-speed automatic the only one offered in the Dune).

Two of the Dune’s limitations are in rear-seat space and cargo room, both of which are good for a sporty/performance car, but somewhat lacking when compared to those of a like-size compact.

But that last, “when compared to many sporty/performance cars” caveat should be taken into account if you’re looking at the Dune (or any Beetle) as everyday transportation. While front-seat space is quite good, the rear seat has a rather upright backrest and can only accommodate folks up to about 5’9, and then only if the seat ahead isn’t pushed so far back as to evaporate legroom. Furthermore, there’s less trunk space than in most similar-size compact cars, and although the hatchback design and folding rear seat backs allow the cargo area to be expanded, the folded seat backs don’t rest level with the cargo floor. And interior storage is only so-so, as the largest compartments are the upper and lower gloveboxes that aren’t within easy reach of the driver.

Inside, charismatic styling and colorful accents more than make up for an abundance of hard-plastic surfaces.

Inside, there aren’t a lot of padded surfaces, with hard plastic being the dominant material. But the Dune counters that with a very colorful look (at least if you opt for our tester’s Sandstone Yellow Metallic paint, which is carried through to the dash face and door tops), with the statement becoming even more vivid at night with plenty of cool red and yellow accent lighting.

There really aren’t that many vehicles any more that carry truly distinctive styling while still being reasonable alternatives to “common” cars. But the Beetle is one of them, and the Dune just takes that appeal one step further.

As if a Beetle doesn’t stand out enough, the flashy Dune — especially when wearing Volkswagen’s optional Sandstone Yellow Metallic paint (“gold” to the rest of us) — really makes a statement. Yet it’s still a reasonably practical car, a combination that endeared it to our testers.