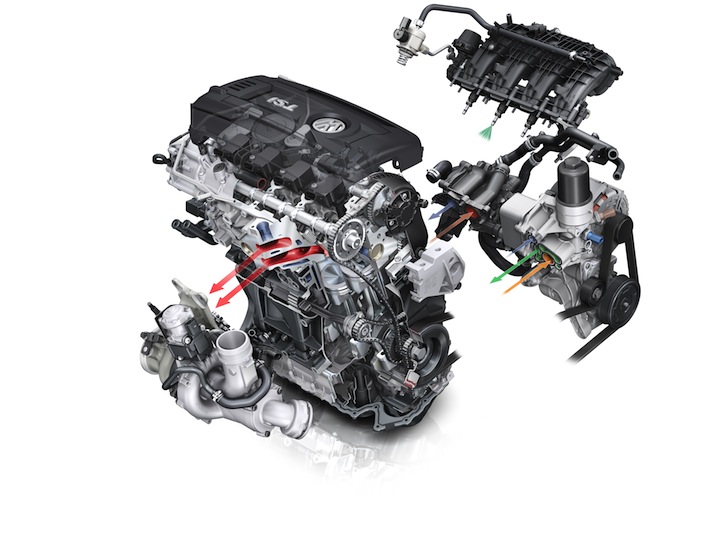 At first glance, Volkswagen’s 2014 U.S. line doesn’t look all that different than it did in ’13. There’s big news just below the surface, though. Specifically, there’s significant changes hiding under the hood of many of the company’s best-selling models.

VW’s familiar 2.5-liter 5-cylinder engine has been standard equipment in many gasoline-fueled variants of the Jetta and Passat sedans, along with Beetle hatchbacks and convertibles. For 2014, the 5-cylinder will be phased out in these three car lines and replaced by a new 1.8-liter turbocharged 4-cylinder “TSI” engine. The 2014 Jetta sedan no longer uses the 2.5 at all, and the Passat and Beetle will gradually switch to the new turbo 4 during the model year. Note that the gasoline-powered versions of the 2014 Golf and Jetta SportWagen continue to use the 2.5-liter engine.

The new engine is based on Volkswagen’s third-generation EA888 engine family that first surfaced Stateside in 210-horsepower 2.0-liter guise under the hoods of some 2013 Jetta GLI and Beetle Turbo models. Like its bigger, more-powerful sibling, the new 1.8-liter engine is a turbocharged and intercooled 4-cylinder with direct fuel injection.  Like the outgoing 2.5, it is good for a rated 170 horsepower. Torque is up seven pound-feet, however,  to 184. 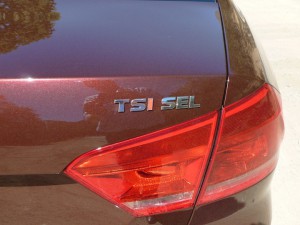 VWs equipped with the new 1.8-liter engine will be tagged thusly. Note reflection of editor Don just above the lens.

While the power numbers don’t look all that different on paper, in reality there are significant differences in the smaller engine’s favor. The 1.8 produces slightly more horsepower at nearly any engine speed, and its power peak comes in at a more accessible 3800 RPM, compared to a lofty 5700 for the 2.5. Likewise, the 4-cylinder reaches peak torque at only 1500 RPM, while the 5-cylinder didn’t max out until 4250 RPM. The 1.8‘s torque curve is flat too, with maximum twist available all the way to 4750 RPM. In simple terms, the new engine is producing more power and torque at the engine speeds people actually see in day-to-day driving.

Unlike nearly every other automobile engine on the market today, the 1.8-liter TSI engine doesn’t have a separate exhaust manifold. Rather, the exhaust passages are integrated into the engine’s cylinder head. This design allows for water-cooling of the exhaust gasses. At highway speeds, the company says the engine runs significantly cooler which allows for an optimized fuel-air mixture and fuel-consumption reductions of up to 20 percent. VW claims these changes will have a significant impact on real-world fuel economy.

Passat fuel economy improves similarly. Five-cylinder models are EPA rated at 22/32 and 22/31 for the manual and automatic transmissions respectively. With the new engine, Passat earns EPA numbers of 24/35 and 24/34 with manual and automatic transmissions respectively. Estimates for the 1.8-liter Beetle are not yet available. More good news: Volkswagen recommends regular-grade gas for all models equipped with the 1.8-liter engine.

Volkswagen recently invited Consumer Guide to drive the company’s 2014 products at an event in the Napa Valley region of California. During the day we had the opportunity to drive three Jettas and a Passat equipped with the 1.8-liter TSI engine.

Lively is the best way to describe Jetta with the new engine hooked to the automatic transmission. That transmission, by the way, is a traditional torque-convertor unit and not the company’s dual-clutch “DSG” transmission used in the sporty Jetta GLI. Throttle response is excellent, and the smooth transmission downshifts willingly, even at part throttle. We noted no turbo lag. The only blemish experienced on our twisty two-lane drive route was the transmission’s habit of upshifting into sixth gear too quickly. This is especially annoying at speeds around 45 mph, as the engine feels as if it’s lugging. A second car we drove displayed the same tendency. 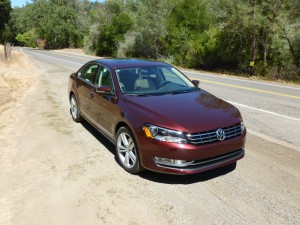 With the manual transmission, the 1.8-liter-powered Jetta SE was a very pleasant surprise. Again, acceleration is lively if not outright fast. The manual transmission has an easy-to-use clutch and a surprisingly satisfying shifter. It’s a bit notchy, but boasts solid mechanical feel. The leather-covered knob feels nice too.

This writer spent considerable time behind the wheel of Consumer Guide’s fondly remembered long-term 2012 Passat 2.5 automatic and found it to be a great car. After a short drive of the ’14 model with the new engine, I’d wager the big sedan is a bit better. Most drivers should find acceleration adequate, and again, throttle response is fine and the 6-speed automatic alert and well behaved. Interestingly, the Passat did not display the low-RPM engine vibration noted in the automatic-equipped Jettas.

Small turbocharged 4-cylinder engines have been a mixed bag. We haven’t been overly impressed with the 1.4-liter turbos in the Chevy Cruze and Dodge Dart, and in our testing Ford’s silky 2.0-liter “EcoBoost” engines haven’t always lived up to their fuel economy promise.  Still, our early impression of VW’s 1.8-liter turbo is excellent. In particular we appreciate the absence of turbo lag and excellent throttle response. We look forward to spending more time with the new engine and doing our own fuel-economy testing.

Though most shoppers will choose the available automatic transmission, we were especially smitten by the Jetta SE equipped with the 5-speed manual. The frisky engine, satisfying shifter, and well-sorted handling combine to make the SE a bit of a sleeper for the enthusiast on a budget. Like all 2014 Jettas, it also benefits from the return of a standard multi-link independent rear suspension.