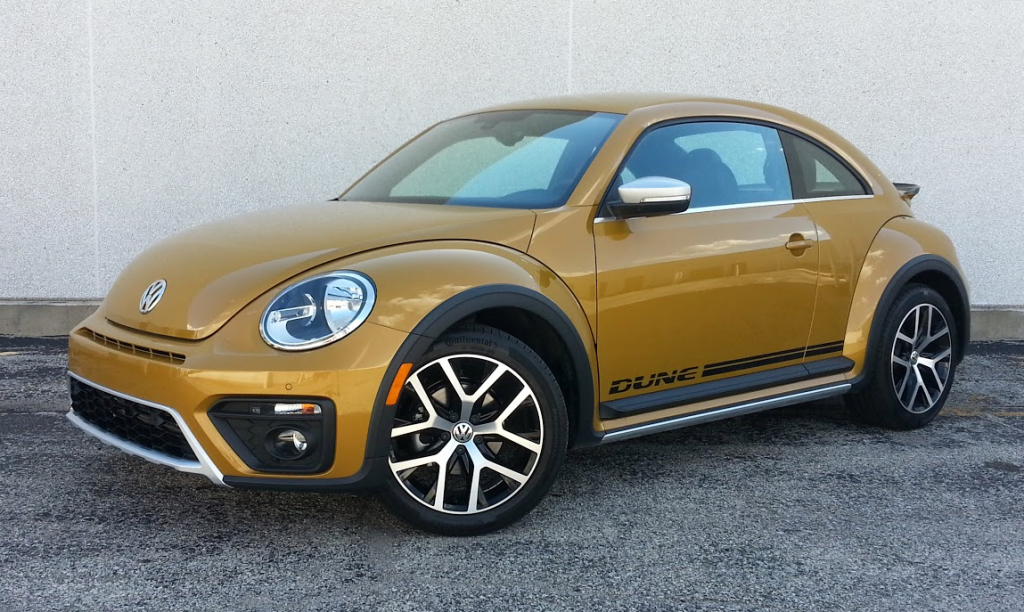 The great: Eye-grabbing looks at an accessible price point

The good: peppy performance, yet easy on the gas

The not so good: Dune not available with VW’s potent 2.0T engine

The beauty of a car like the current Volkswagen Beetle is that, if you like it, it’s going to be there for you awhile, unchanged. It’s something of a gimmick that relies on familiarity.

The curse of a car like the current Beetle is that it can’t be changed much if it is going to stay true to its image. How, then, does a manufacturer maintain interest over time in a vehicle that really can’t stray too far from what it is?

Of course, features can be added, and Volkswagen has done that, giving the Beetle a new infotainment touchscreen, as well as improved smartphone connectivity for most models. That isn’t readily apparent at the curb, though. Neither is a realignment of the model lineup—something else VW did for 2016. However, there’s always paint and trim to create some buzz, which explains the Beetle Dune.

The Dune is intended to pay tribute to the dune buggies that were built on the original rear-engine Beetle chassis. It has a slightly higher ride height and wider stance, a specific gray-and-black interior scheme with yellow stitching and seat piping, and—if you’re willing to pay a little extra for it—a distinctive gold paint that’s also reprised inside on the instrument panel and door tops.

The Beetle is fairly roomy up front for a sporty coupe, but like most cars in its class,  the rear seat is a bit cramped.

Just thinking out loud here: With this color scheme, why hasn’t the Dune already been named the “Official German-Engineered Car of the New Orleans Saints”?

Dune detailing (even the instrument dials are rimmed in yellow) enlivens what’s a somewhat austere interior. Soft-touch surfaces are found only on the door arm rests and the top of the adjustable center arm rest. Otherwise there is lots of hard plastic. The new touchscreen is fairly simple to use for inputting radio presets—better than some VW units of recent memory.

In just about every other way, this is the Beetle as it has been since it replaced the New Beetle in 2012. The cloth-and-leatherette front seats are comfortable with good support, and have the usual VW gear for manually setting preferred seat height and angle. Headroom is good, too, though the roof shape restricts vision a bit at the top of the windshield. The rear seating positions come with much less headroom—your 5’-10.5” reviewer was just about at the limit. The rear seat back is fairly upright, which might detract from long-ride comfort. If front passengers can sit well forward, there’s a chance at decent legroom. Otherwise it gets cramped. Rear headrests intrude into the field of view out the large rear window.

Cabin storage benefits from upper and lower glove boxes—handy because there’s no center-console cubby, just a tiny covered space built into the armrest. A small open bin is found at the front of the console under the USB and auxiliary ports, two open cup holders reside in the console, and the doors feature pockets with elastic-strap sides. Rear passengers get a pouch on the back of each front seat, small sidewall pockets, and one central cup holder—bring two straws.

For a small car that’s more about style than function, trunk space isn’t terrible. It will snugly hold a weekend’s soft luggage for two, or a week’s worth of their groceries—providing whole sides of beef aren’t on the shopping list. For bigger jobs, rear seats fold in a 50/50 split, although not nearly flat, and at a considerable height above the trunk floor. 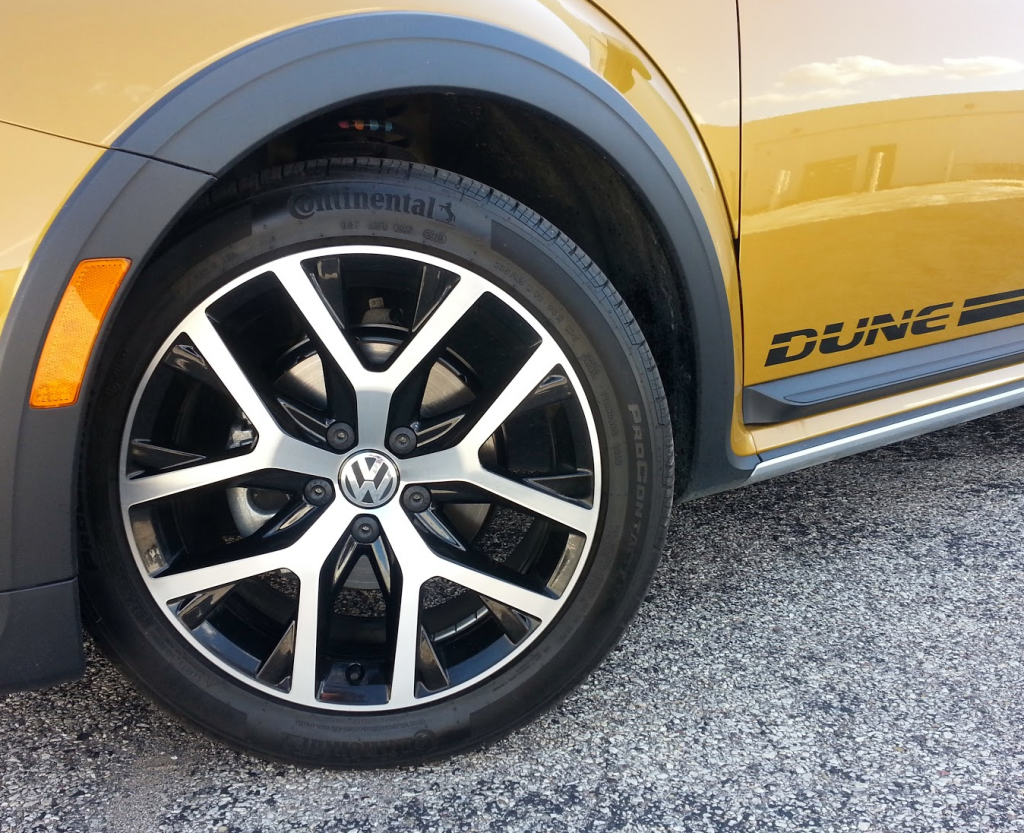 There’s nice performance from the 170-horsepower 1.8-liter turbocharged four-cylinder engine, though it seems more eager around town when picking up the pace from slower speeds than when trying to get more out of it on the highway. Consumer Guide®’s test car came with the six-speed automatic transmission, a no-cost alternative to the standard five-speed manual. EPA ratings are 25 mpg in the city, 34 on the highway, and 28 combined. This driver averaged 27.0 mpg after logging 176.4 miles in the car, 45 percent of that under city conditions. Steering is light for easy maneuverability. Perhaps it has something to do with the suspension tinkering but the Dune handles well. Rushing briskly up an expressway exit ramp with radii at both ends of a very short straight, the car accurately hugged the inside of the lane without heeling over or requiring continual inputs to fight understeer.

The Dune starts at $23,995, which places it closer to the lower end of the reorganized Beetle lineup than to the top. With the extra-cost Sandstorm Yellow Metallic paint and delivery CG’s test car peaked at $25,065. Sporty/performance-class cars like the Beetle get a little bit of a pass for sacrificing some sensible utility and economy for expressive looks and/or vivid performance because not everyone wants the exact same things out of a car, but at least this one doesn’t sacrifice your bank account, too.

Thinking out loud again: Why is Matt LeBlanc not doing TV ads for this car as Joey from Friends? “How you Dune?” 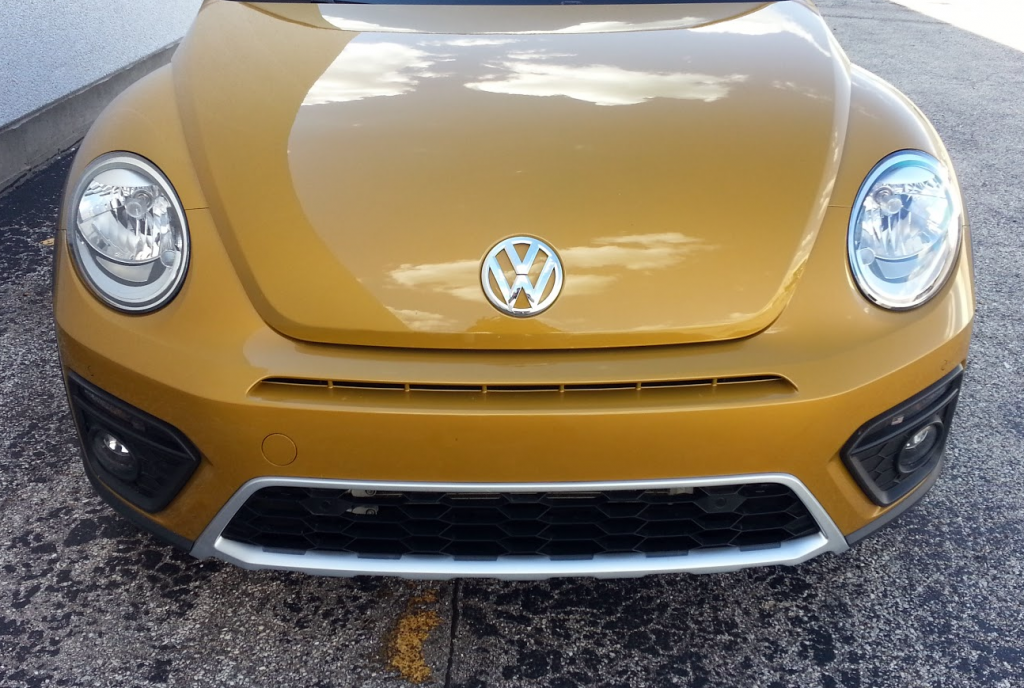 Frankly, I was a bit surprised at how charmed I was by this car. I’m a sucker for the old “spring special” limited-run appearance/color packages that Detroit automakers used to trot out to give sales a late-season boost, and the 2016 Volkswagen Beetle Dune strikes me as a clever modern-day riff on this mostly defunct practice. The Beetle Dune’s unique features are pretty much entirely cosmetic, but darned if the overall package doesn’t add up to more than the sum of its parts, at least in terms of visual appeal. VW’s says the Dune’s new front and rear fasciae, slightly raised ride height, and beefy bodyside and fender moldings are inspired by the classic off-roading “Baja Bugs” of the 1970s. Well, don’t think you’ll suddenly be able to do any serious off-roading—Beetles don’t even offer all-wheel drive—but the Dune’s raised ride height should add an extra measure of tractability in heavy snow or on a rough gravel road.

The thing I like best about the Dune is that Volkswagen based the package on a midline Beetle instead of a topline model. The flashy seats are cloth, not leather, and while the Dune comes standard with desirable features such as a rearview camera and a touchscreen infotainment system with Apple CarPlay and Android Auto functionality, it’s not decked out with every luxury amenity under the sun. The starting price of our tester was $23,995, which was bumped up to a bottom line of $25,065 after destination ($820) and Sandstorm Yellow Metallic paint ($250). (If the ostentatious color isn’t your bag, you can also get a Dune in Pure White or Deep Black Pearl, but c’mon… you should go for the gold…. err, yellow.) At $25K, the Beetle Dune seems well within reach of the type of young buyer who would best appreciate its amped-up looks.

The rear spoiler, wheel-lip and bodyside moldings, stripes, and upsized wheels give the Beetle Dune a muscled-up look.