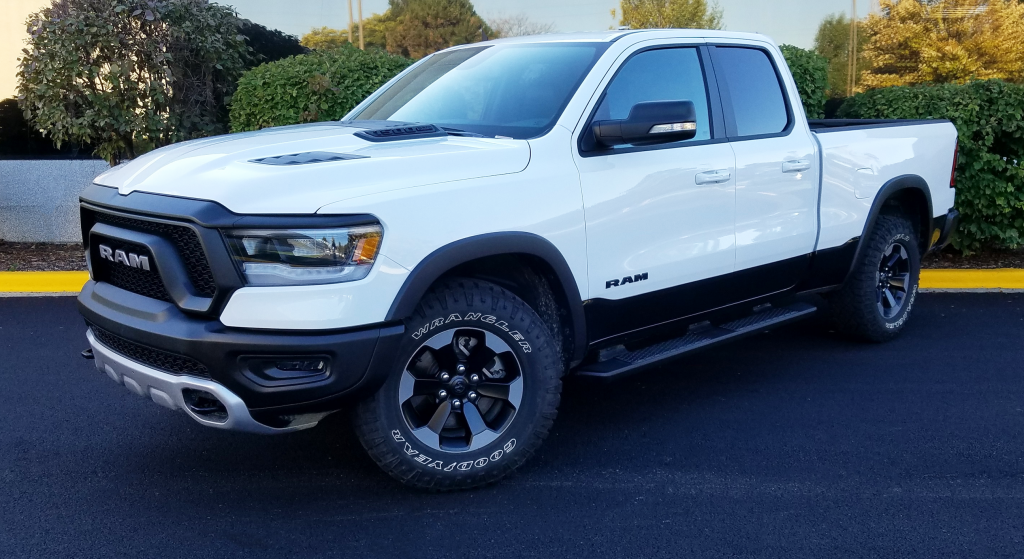 The not so good: Despite fuel-economy measures, Hemi V8 is still thirsty; slightly diminished ride quality and quietness compared to non-Rebel Ram 1500 models

Rebels, by their nature, don’t easily conform. So it is with the Ram 1500-series pickup truck badged Rebel.

The Rebel continues in its role as the off-road specialist in the 1500 line, which is fully redesigned for 2019 and has already yielded several examples for test drives by Consumer Guide editors. As before, this particular Ram has its own frontal appearance, its own interior features, and a driving behavior that stands a little apart from the rest of the Ram clan. 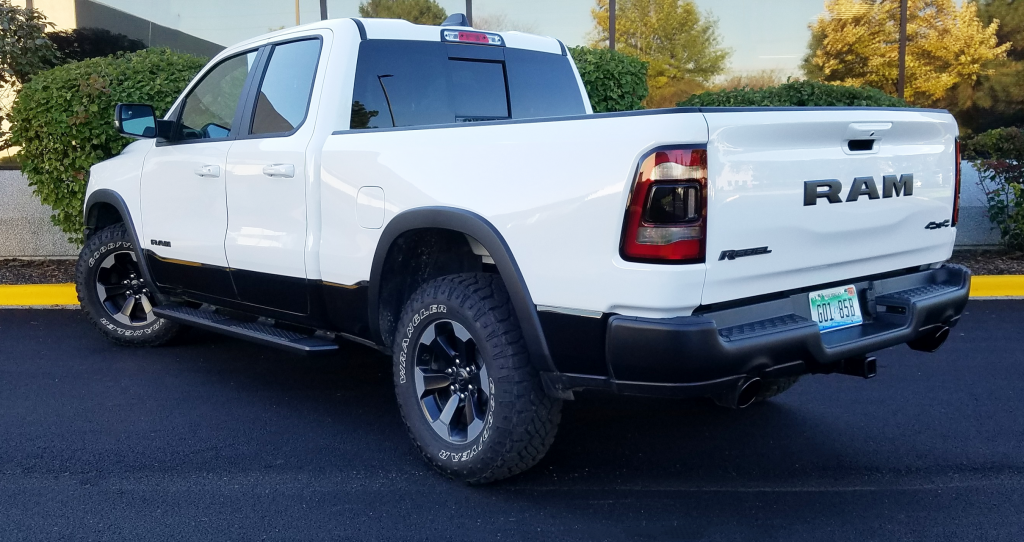 Two cab-and-bed configurations are offered for the Rebel. Both cabs feature four-door convenience, but second-row space in the Quad Cab is considerably shorter than in the Crew Cab. CG sampled a Quad with a 6-foot-4-inch cargo box, which started at $46,390 with delivery. Rebel Crew Cabs come with a 5′-7″ box and have a base price $2800 higher. A limited choice of paint colors is available—the test truck’s Bright White was one of just six options—and black with red detail highlights is the sole interior ensemble for the Rebel.

While all ’19 Ram 1500s have been restyled, the Rebel is still identified by a matte-black grille with a “jowly” frame. It has surrendered the muscle-car-like twin-scoop hood found on earlier Rebels. The new model’s “sport performance hood” is similar to the one on other new Rams, though it does have a unique matte-black yoke with engine-ID plates on the central power-dome stamping, and black vents flush with the hood surface. Its black-painted 18-inch wheels are distinct, too.

What is the Ram Classic?

As an off-roader, the Rebel naturally comes only with four-wheel drive. It features a transfer case with electrically actuated shift-on-the-fly capability. Also, the Off-Road Group that is optional on other Ram 4x4s is included with the Rebel. It consists of specially tuned shock absorbers, chassis skid plates, a one-inch lift, electronically locking “E-Locker” rear axle, hill-descent control, 275/70R18E outline-white-letter all-terrain tires, and a full-size spare. However, the Rebel no longer has standard height-adjustable air suspension—though it remains an option. The all-coil-spring suspension used by Rams in the last decade has made them standouts for on-road ride quality among full-sized pickups. The Rebel doesn’t feel quite as comfortable in this kind of driving, no doubt due to shocks and tires intended for other surfaces, and the chunky-tread rubber isn’t as quiet on the open road.

For a midline-priced full-size pickup model, the Rebel’s overall cabin ambiance is a clear step above any similarly priced Chevrolet Silverado model (the Silverado is also redesigned for ’19). Highlights include two-tone red/black upholstery, high-quality white and red contrast stitching, and red-tinted satin-metal-look trim on the dashboard and steering wheel–and an illuminated Rebel badge in the instrument panel.

Rebel’s model-specific front seats are comfy low-back buckets clad in cloth and vinyl. Between them is the capacious and configurable center console found in bucket-seat Rams. Priced near the middle of the Ram 1500 lineup, the Rebel is plush to a point. The driver’s seat has 8-way power adjustment, perforated leather with red accent stitching covers the steering wheel (on a tilt/telescoping column), and a power sliding rear window is standard. However, while generous applications of red contrasts warm up the cabin looks, hard plastic with no “give” caps the rear doors, and hard-use rubber floor mats are underfoot. Air conditioning is standard, but as a simple manual unit.

Previous 2019 Rams that have passed through CG editors’ hands have been Crew Cab models, so the Quad Cab Rebel was a welcome change. Rear passengers—up to three adults—sit decidedly upright, and legroom is in short supply. Their personal-item storage needs are addressed by pouches on backs of front seats and twin cup holders in the pull-down center armrest and in the back of the center console. The split-folding rear seat back in the Rebel is divided 60/40. Step-in height is somewhat tall; shorter passengers would likely welcome the optional tubular side steps that were added to the test truck.

The optional Hemi V8 engine tacks on an additional $1195, and certainly more than that in fuel costs over the life of the vehicle. As with the previous-generation Rebel, an aggressively styled grille adds to the macho look.

As in earlier test Rams, the eminently powerful 5.7-liter 395-horsepower Hemi V8 and dial-activated 8-speed automatic transmission served as the powerteam. With a 3.92:1 axle ratio that is standard in the Rebel, CG’s test vehicle moved with the authority we’ve come to expect. Also familiar—unfortunately—was poor fuel mileage. Ram took steps to make the new 1500s lighter and more aerodynamic, but even then the EPA estimates for the Hemi Rebel are 15 mpg in the city, 21 mpg on the highway, and 17 mpg combined. Our run in the Rebel worked out to just 13.75 mpg, the poorest performance we’ve gotten yet in one of the new trucks.

In an age of increasingly expensive big pickups, the Ram Rebel is still priced on the right side of $50,000. It took the Hemi; an option package with an upgraded UConnect infotainment system, Apple CarPlay/Android Auto connectivity, and heated seats and steering wheel; and a trio of individual options to push the test truck to $51,220. You could say that’s the act of a true rebel.