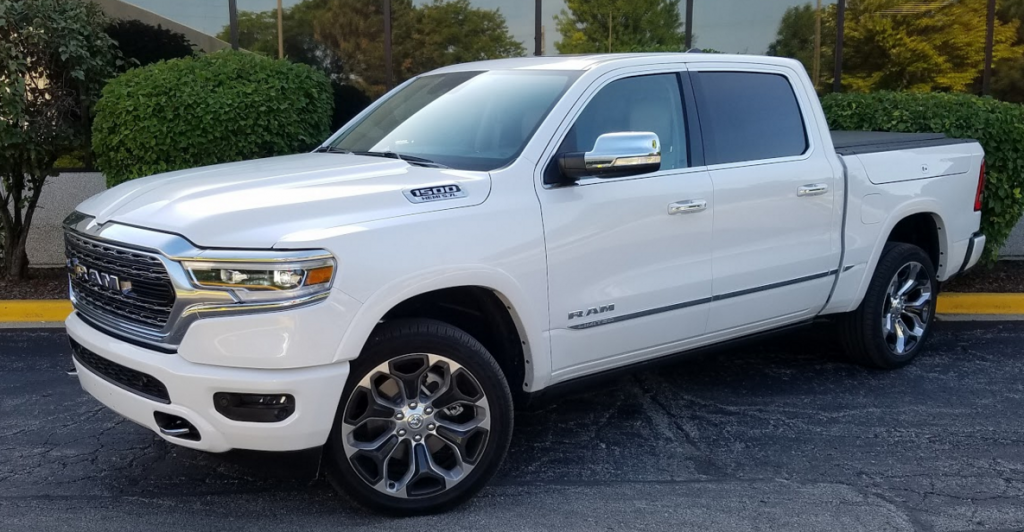 The great: Outstanding ride quality and suspension composure for a full-size pickup

The not so good: Despite fuel-economy measures, Hemi V8 is still thirsty

After getting an initial taste of the redesigned 2019 Ram 1500 in March, we tested a mid-line Laramie Crew Cab 4×4 in June. (So see those reports for more details.) This time, it was a top-line Limited that came under scrutiny — most “scrutinizing” being done during a 450-mile drive from the Ram 1500 eTorque preview in Lexington, KY, to Chicago.

While basically the same as the Laramie crew cab 4×4 driven earlier, there were some notable differences in this Limited … perhaps the biggest being the $15,000 boost in sticker price. Granted, our tester was quite loaded — and represents where the pickup market seems to be heading — but it just barely managed to sneak in under 70 grand (!).

Still, that money buys a lot of truck. Not only was the tester blessed with the general goodness of the new Ram, but also with such high-end amenities as four-corner air suspension, wireless device charging, heated and ventilated front and rear seats, heated steering wheel, power-adjustable pedals, Harman Kardon sound system, 360-degree camera system, huge 12-inch touchscreen (more on this later), dual-pane panoramic sunroof, keyless access and starting, power running boards, adaptive cruise control, park assist, and the ever-popular Ram Boxes and Ram Bins (the latter being bins in the floor of the rear-seat area), but it also had a full complement of high-tech safety features including front and rear obstacle detection with automatic braking.

The Limited is dressed to impress inside. The tester’s 12-inch screen was great for displaying maps, but … 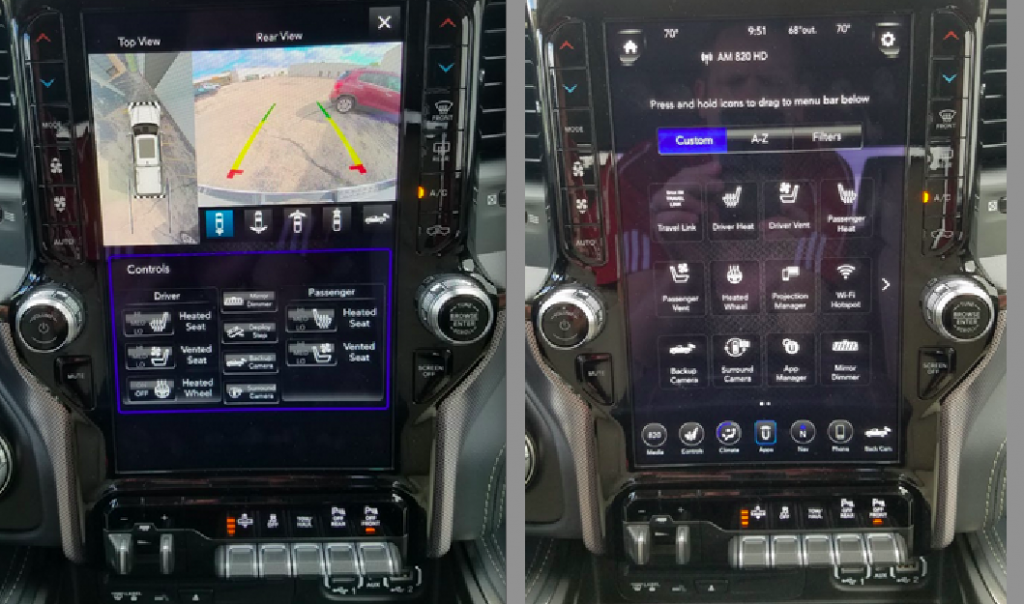 … its width didn’t make the rear and 360-degree camera views (left) much if any larger than they’d appear on the standard 8.4-inch screen, and you still have to cycle through screens to get to various adjustments.

As mentioned previously, this Ram had the available 12-inch touchscreen, which took the place of the standard 8.4-inch one. The “footer” is vertically oriented (and thus not much wider than the “sideways” 8.4), so it really doesn’t help much when displaying, say, the rearview-camera image, but it’s great when displaying a map. Right-side elements are a bit of a reach for the driver, not everything is immediately clear in function, and some processes still require multiple steps to execute, but — like the 8.4-inch unit — it’s still one of the easiest ones around to use. 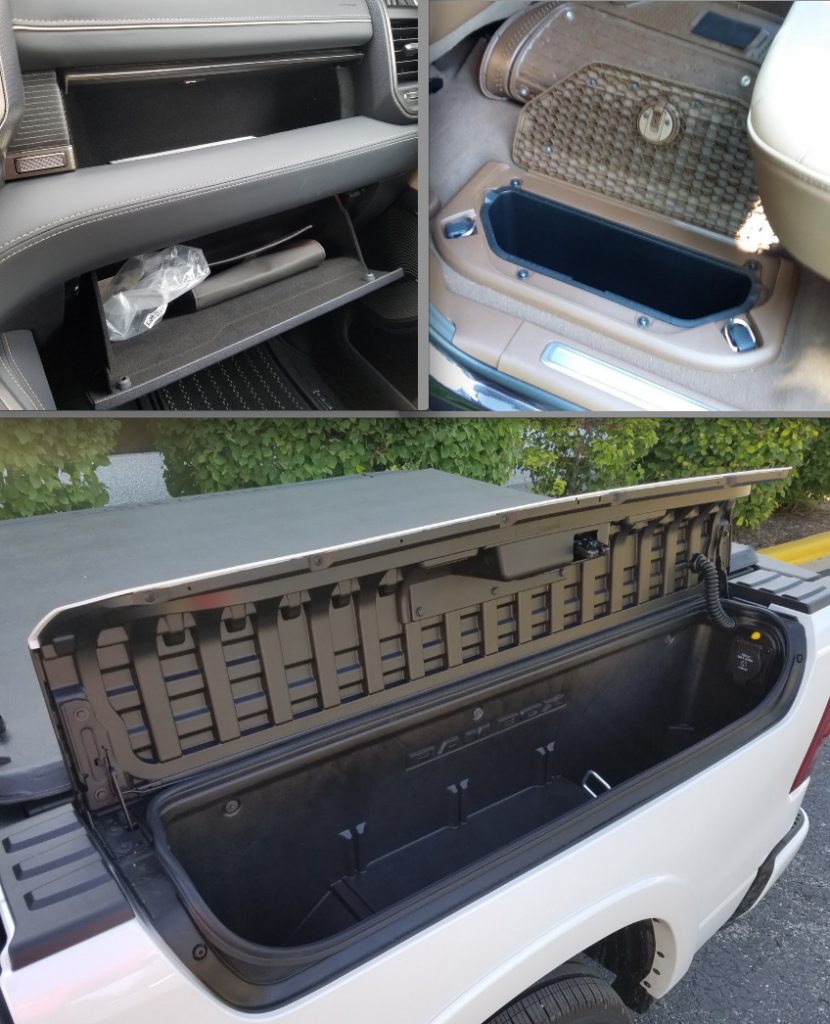 Upper and lower gloveboxes, the rear-floor Ram Bins, and famed Ram Boxes in the rear fenders all make for great storage spaces. The last are now better lit and can include a 12-volt outlet, perfect for recharging cordless tools.

A couple of things were revealed during the long highway drive up from Kentucky. First, a stop at my favored timing stretch in east-central Illinois netted a 0-60 average of about 7.9 seconds in 2WD, 7.75 seconds in 4WD. The latter being quicker indicates that the traction-control system was cutting power a bit at takeoff in 2WD, though the difference wasn’t much.

Also, the previous Ram Laramie averaged just 14.3 mpg in about 70-percent city driving, while this Limited — configured nearly exactly the same way — returned 18.5 mpg in about 90-percent highway driving. (And 17.3 mpg overall, which included some city driving after I got back.) Sad as it may seem, that 14.3 figure is close to the 15 mpg EPA City estimate, while the 18.5 mpg — though far better — is 2.5-mpg shy of the highway rating.

In 2WD, our Ram Limited test vehicle did the 0-60 sprint in an average of about 7.9 seconds, but was a bit quicker in 4WD at 7.75 seconds — meaning off-the-line traction is an issue with its strong Hemi V8.

Admittedly, however, many of those miles were covered at a gas-sucking 70 mph. (OK … 70 mph plus.) In any event, the optional 33-gallon fuel tank ($445) permitted the whole 450-mile trip to be easily covered without refueling, as it meant a theoretical 610-mile range.

But the Ram made a better showing in other areas. Suffice it to say that this is one comfy highway cruiser, with an impressively smooth and quiet ride despite being fitted with optional low-profile 22-inch tires and having huge side mirrors and all the aerodynamics of a brick. (Yeah, there are lots of new tweaks to make it go through the air more smoothly, but look at it … it’s still a brick.) All the various storage areas were put to good use, and the Harman Kardon sound system did its part in making the miles fly by. While most people probably wouldn’t think of a pickup as being a great highway vehicle, this one could easily change their mind.

I know what you’re thinking: “Poor guy had to drive a pickup truck on an 8-hour road trip.” Yeah, sign me up for combat pay …. and then give me the keys so I can do it again.