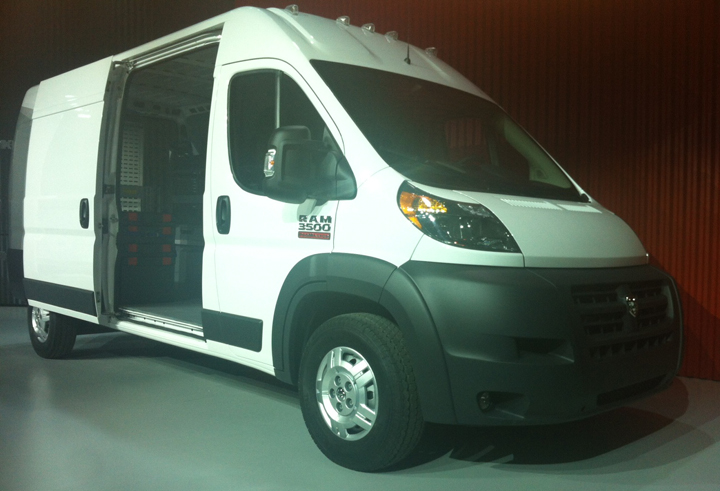 After a five-year hiatus, Chrysler returns to the large-van market with the 2014 Ram ProMaster. The ProMaster is based heavily on the European-market Fiat Ducato. It is similar in size and powertrain offerings to the Mercedes-Benz Sprinter, which was itself available as a Dodge for the 2004-2009 model years.

The ProMaster will be available in a dizzying array of configurations, which include the choice of two roof heights, three wheelbase options, and four body lengths.

Under the hood, a 6-speed automatic will mate to either a version of Chrysler’s familiar “Pentastar” 3.6-liter V6 (rated at 280 horsepower) or a new-to-the-U.S.-market, Fiat-built “EcoDiesel” 3.0-liter turbodiesel 4-cylinder. That engine is rated at 174 horsepower and, more importantly, 295 pound-feet of torque.

The ProMaster will be only the third product marketed under the Ram banner, following the Ram pickup (a 2013 Consumer Guide Best Buy) and the Ram C/V, which is a minivan-based light-delivery vehicle.

With the ProMaster, Chrysler will be joining Ford in tapping a European affiliate for an American-market large van. The Ford Transit, which closely parallels the ProMaster in size and power, will also launch as a 2014.

Watch for a small Ford Transit Connect-sized vehicle based on Fiat’s European-market Doblo van to round out the Ram lineup in the not-to-distant future.

ProMaster pricing has not yet been announced, but sales should begin this fall.

CG Says: With the ProMaster, the nascent Ram brand begins to take shape. Though we’re still having a hard time not calling the Ram pickup a Dodge, we see how selling commercial vehicles like the ProMaster under the same brand banner that covers the Dart and Grand Caravan could have been messy for marketing.

Consumer Guide has always been impressed with the Dodge/Mercedes-Benz Sprinter, and if the ProMaster fulfills its promise of like utility and performance—and if it’s priced right—Ram should have no trouble finding buyers.