Rebirth of the Biggies: The redesigned 2015 Chevrolet Tahoe/Suburban and GMC Yukon/Yukon XL 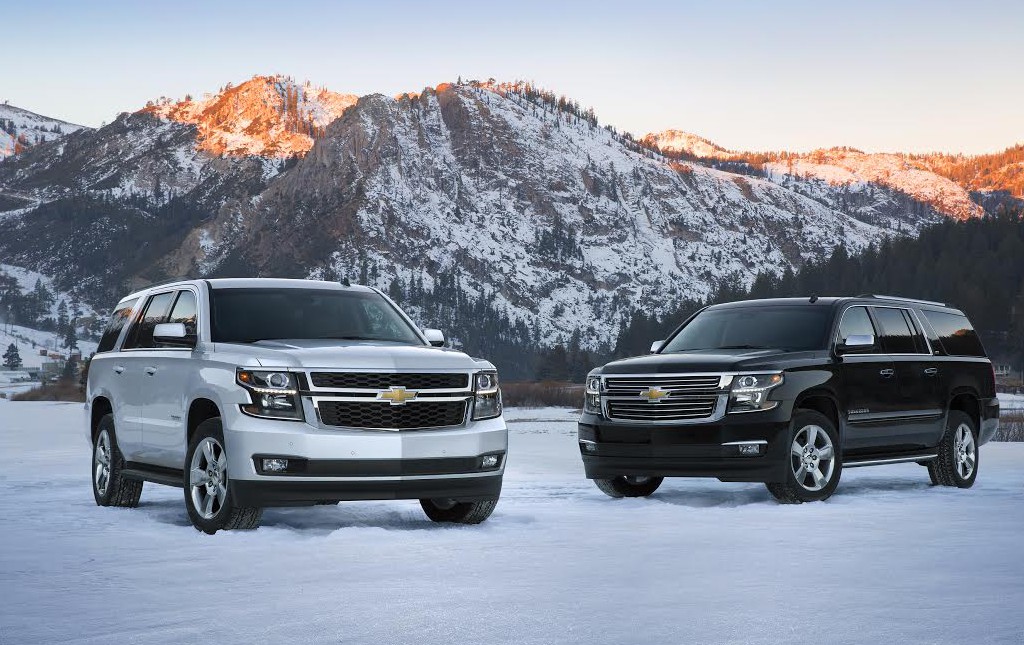 When you already own 75% of a high-profit class of vehicles, there’s probably little incentive for a redesign. But that’s what GM is doing with its quartet of popular, full-size SUVs.

Of course, part of that is likely due to necessity. GM’s large SUVs are built off the same platform as the corporation’s full-size pickups, and those were redesigned for the 2014 model year.

As before, the Chevrolet Tahoe and longer Suburban share basic structures with their GMC Yukon/Yukon XL counterparts, but the redesign brings more differentiation between the two makes than there has been in the past. 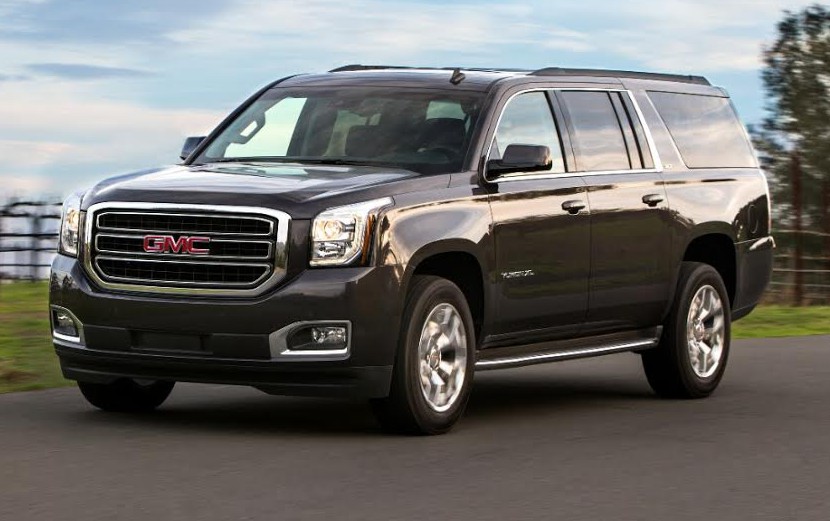 GMC’s versions fall under the Yukon name, and are differentiated with unique — and vastly different — front-end styling.

It starts right up front. Not only are the grilles different, but the headlight treatments are as well. Granted, that accounts for most of the exterior differentiation, but it’s the most obvious part of the appearance equation when everything aft of that is either a big box, or a bigger box.

And these are big boxes indeed. Both the “short” and “long” versions (the latter adding 14 inches in wheelbase and 20 inches in length) are slightly longer, lower, and wider than their predecessors, and they offer measurably more interior room. However, cargo room has actually decreased somewhat, though it went for a good cause. But in either case, these vehicles are more spacious than some places I’ve lived. Also much more nicely furnished.

Both the Tahoe and Suburban (and by extension, the GMC Yukon and Yukon XL) come standard with a 3rd-row seat. With available bench seats in all rows, they can both accommodate up to nine passengers, though most buyers choose seating for seven or eight. However, in past years, the 3rd row was a problem area, as it didn’t fold flat into the floor as many do, instead lying at least six inches above the floor. So the only way to get a flat floor in back was to remove the two heavy seat sections.

No longer. With the 2015 redesign, both the Tahoe and Suburban have 2nd and 3rd-row seats that fold flat and level with the cargo floor. However, that was accomplished largely by raising the floor, thus decreasing the overall cargo volume.

When you open the hatch (which not only has an unusual and handy separate-opening window, but also a hidden overhead wiper and available power operation), you’ll notice that the floor sits about five inches above the level of the hatch opening. That makes for a high liftover when loading heavy objects, but it also provides for a couple of roomy underfloor storage bins. 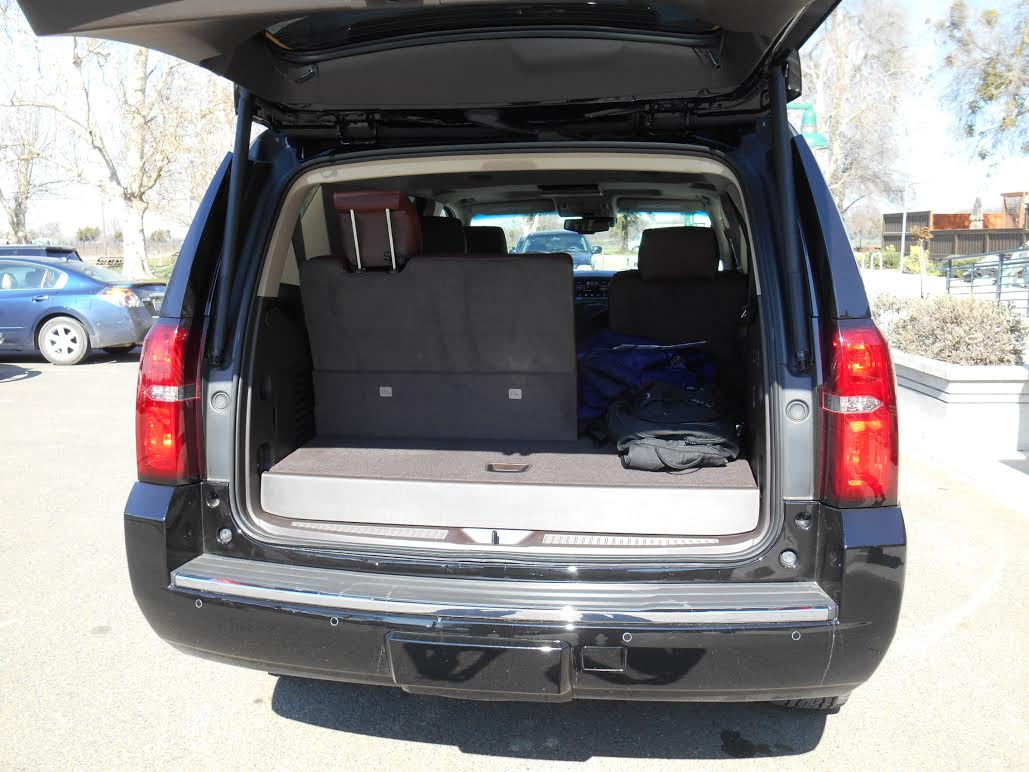 The new fold-flat 3rd-row seat comes at a cost, as the cargo floor had to be raised to allow for a flat load floor. That makes for a taller liftover, but also creates a good amount of underfloor storage.

While the change affected cargo-carrying capability, it didn’t help much with 3rd-row passenger space. In the Tahoe, there still isn’t much legroom in the 3rd row, and anyone sitting there—even a kid—rides knees up. There’s significantly more space in the Suburban’s 3rd row, which can accommodate average-size adults without forcing their knees into their chest, but braces for the 2nd-row seats can interfere with foot space. Still, no other SUV offers seating for up to nine passengers, and GM says that only about 35% of Tahoe buyers and 55% of Suburban buyers have children at home.

While improved cargo versatility is a notable benefit of the redesign, it is joined by a host of new features along with numerous mechanical upgrades.

All of these 2015 SUVs add newly available safety and infotainment features. Those on the safety side include class-exclusive front-center airbag (it pops out of the side of the driver seat to form a cushion between the driver and front passenger), front obstacle detection (rear was already available), lane-departure warning, rear cross-traffic alert, forward collision alert, and crash-imminent braking. Blind-spot detection was already offered, but it adds lane-change alert, which detects fast-approaching vehicles up to 230 feet behind and puts out a warning if the driver activates the turn signal to move into that lane. Some of these warnings come in the form of an illuminated light, while others use the newly available Safety Alert Seat, which uses vibrating seat bolsters as a warning.

On the feature front, newly available are adaptive cruise control, power-folding 3rd-row seat (only the 2nd row could be power-folded last year), a conversation mirror that allows the driver to see those in back, an 8-inch touchscreen with a fold-up screen that reveals a “hidden” compartment behind it, and keyless entry and starting. At least a dozen power points are available (USB ports, 12-volt sockets, and 110-volt plugs), and later in the year, you will be able to equip your vehicle with a Wi-Fi hotspot. New theft-prevention measures include glass-breakage sensors, interior motion detectors, and an inclination sensor that detects if the vehicle is jacked up to be towed or remove the wheels. 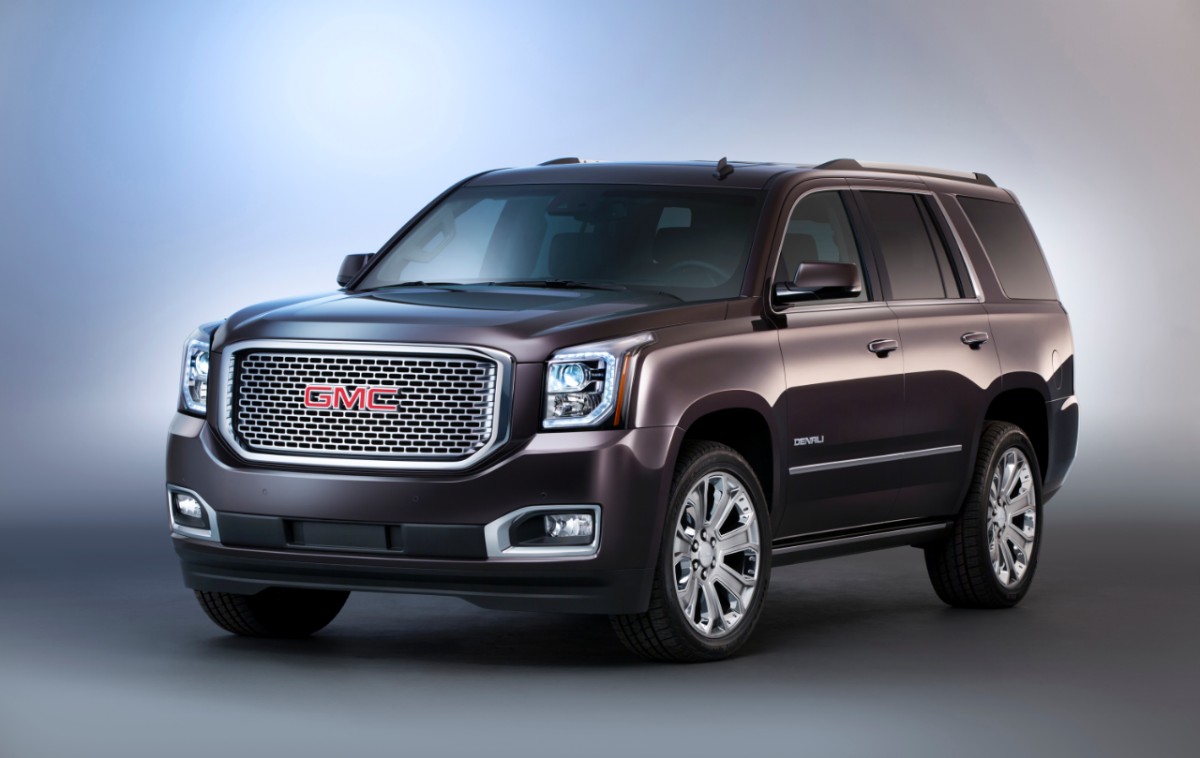 And then there’s the GMC Yukon Denali. As a line-topping model that doesn’t have a counterpart in the Chevrolet portfolio, it accounts for more than half of all Yukon sales, and adds several features not offered on the lesser models. These include a 6.2-liter V8 (in place of the 5.3-liter V8 in the others), Head-Up windshield display, a configurable instrument-panel display, and the signature Denali chrome-hatch grille.

On the mechanical side, the aforementioned V8 engines receive the same updates as those used in the redesigned pickups. These include variable valve timing, direct injection, and Active Fuel Management, which allows the engine to run on four cylinders under cruise conditions to save fuel. The net effect is both more power and better fuel economy. The 5.3-liter version gets a boost from 320 horsepower to 355, and EPA ratings are up about 10% from 15 city/21 highway to 16/22. Meanwhile, the 6.2-liter V8 offered only in the Denali goes from 403 horsepower to 420, with EPA ratings that jump from 14/18 to 14/21. (All figures with rear-wheel drive.) Also newly available on the top-line Tahoe and Suburban LTZ and GMC Denali is GM’s Magnetic Ride Control suspension.

Driving the 2015 Chevrolet Tahoe and Suburban, and GMC Yukon

With all that’s new for 2015, these big GM SUVs can be equipped to rival luxury cars for amenities, while trading a car’s better performance for greater cargo and towing capabilities (the latter being up to 8600 lbs.). As such, their market could be expanded beyond those who needed a big SUV for its utility to include buyers who had previously looked to premium sedans. 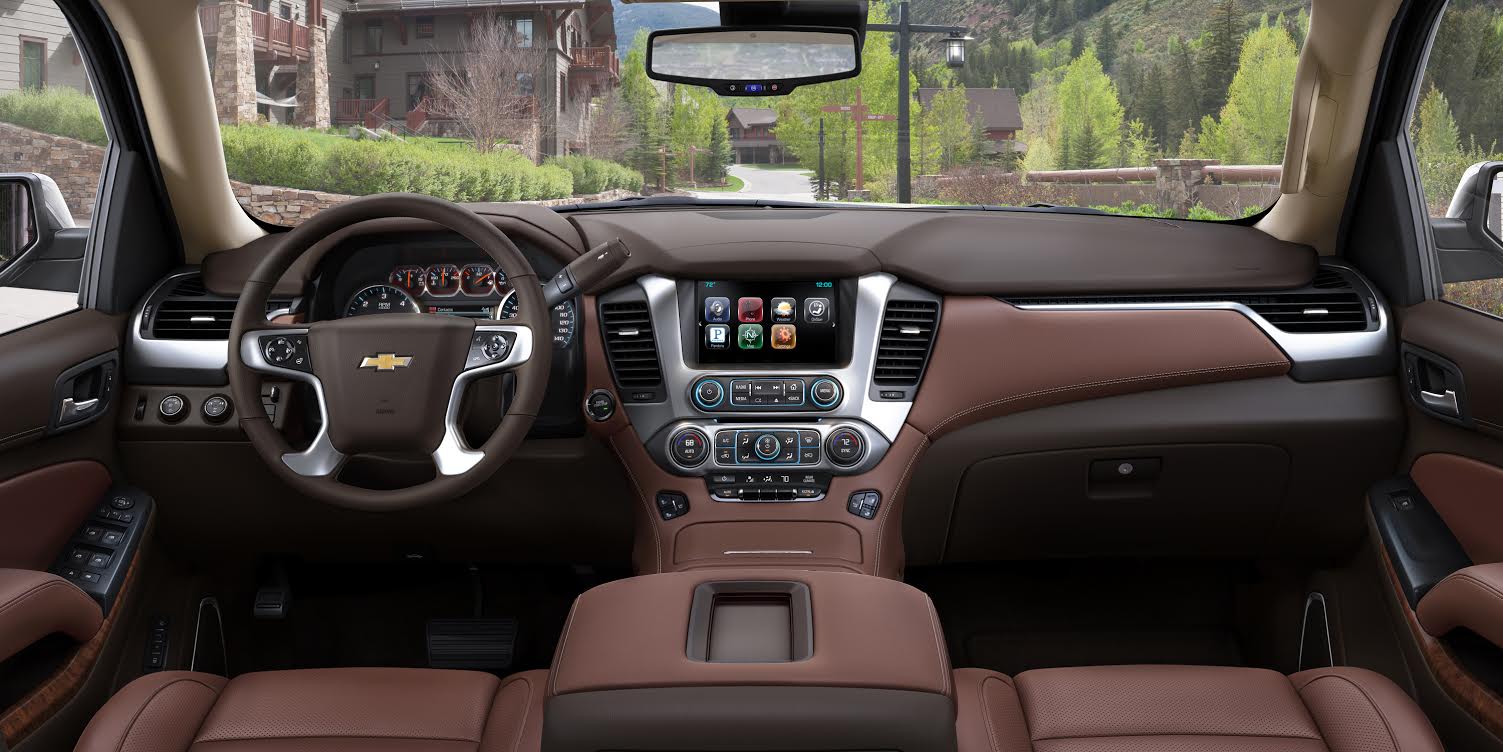 Newly available features allow these big SUVs to compete in the luxury league, as reflected in this top-line Tahoe LTZ’s dashboard.

And that could leave GM with an even bigger slice of the sport-utility pie.