What was the Dukes of Hazzard Car?

What was the Dukes of Hazzard car?

Dodge Charger fans have a love-hate relationship with The Dukes of Hazzard TV show. On one hand, the show’s main prop, the General Lee, is perhaps the most famous TV car ever and did much to raise the profile of the 1969 Dodge Charger. On the other hand, all those jumps and other stunts took their toll on the supply of Chargers. Estimates range from 200 to over 300 cars used during the show’s run from 1978 to ’85. Only 18 Chargers survived the series. 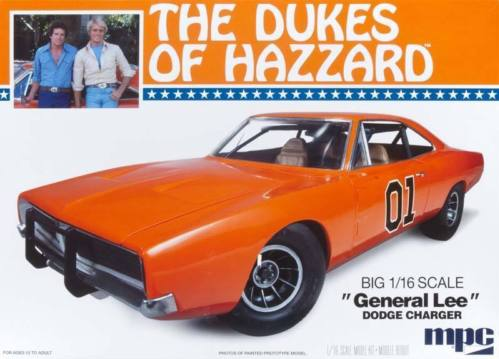 The Dukes of Hazzard car in kit form.

Lee 1, the Charger used in the first episode to jump over a Hazzard County police cruiser, was recently sold to pro golfer Bubba Watson at the Barrett-Jackson Scottsdale Auction for $110,000. Lee 1 had suffered major frame damage and required a total restoration before it could cross the block at Barrett-Jackson.

The Dukes of Hazzard, which was set in the Deep South, revolved around cousins Bo and Luke Duke’s evasions of local law enforcement in their race-prepped 1969 Dodge Charger. Because so many different cars were used in production, it’s hard to nail down the exact specs of the General Lee. Chargers with 318, 383, and 440 V8 engines were pressed into service. No 426 Hemis were used, though. Most were automatics, but a few manuals showed up. Often a ’68 Charger was made to resemble a ’69.

Even though the ’69 Dodge Charger was only nine years old when the series began, it was already on its way to becoming a classic. The emissions-strangled performance of cars in the late Seventies had many enthusiasts longing for the fierce acceleration of bygone muscle cars. The Dodge Charger was one of the most loved of the breed, and The Dukes of Hazzard was the perfect showcase for it.