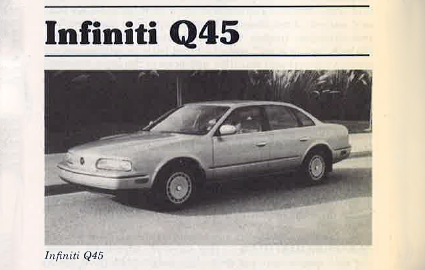 Not since the attack on Pearl Harbor has another nation engaged in battle on U.S. soil, at least with the U.S.

Auto industry buffs may remember the “Asian Invasion” of the early Nineties, which was not a battle of military conquest, but one for the attention of upscale car shoppers. And the battle did not involve American interests, at least not directly.

New for the 1990 model year were Infiniti and Lexus, luxury car brands launched by Nissan and Toyota, respectively.

Infiniti and Lexus arrived about four years after Acura, Honda’s upscale brand. But unlike Acura, which focused on sportier and more affordable vehicles, Infiniti and Lexus were aiming squarely at Mercedes-Benz, each offering a large flagship sedan meant to lure shoppers away from the German maker’s mighty S-Class big car. 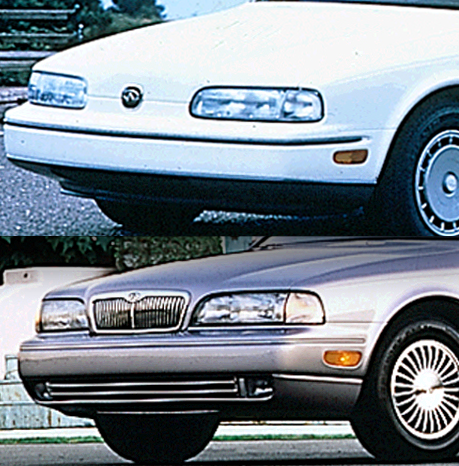 The Q45 was launched in 1990 with a grille-less front end. A 1994 freshening brought the Q a more conventional grille-centric design.

Though their goals were similar, the two new Japanese luxury brands took different approaches to building a full-size luxury car. While both featured rear-wheel drive, V8 power, and were fitted with well-finished leather lined cabins, the two cars looked nothing alike.

Lexus took a conservative approach to designing its LS 400, the end result being an inoffensive sedan that looked very much like the S-Class it was emulating. The Infiniti Q45, however, was more radical in appearance, sporty lines, more rakish proportions, and a signature grille-free front clip.

The Q45 more than looked the part of luxury-class challenger. Under the hood a 4.5-liter V8 cranked out a class-leading 278 horsepower, fully 40 more than could be had in the same-year S-Class.

Available as part of the Touring Package was Infiniti’s Super HICAS 4-wheel steering. The High-Capacity Actively Controlled Steering (HICAS) gave the big sedan surprising sure-footedness in high speed maneuvers, employing rear wheels that turned either in the direction of the front wheels, or in the opposite direction, depending on speed. A version of the HICAS system was also found on versions of the Nissan 300ZX.

The Q45’s most impressive feature was not its styling or technology, however, it was its price. Fully equipped, the Q45 listed for less than $41,000—this at a time when a loaded Mercedes-Benz 560SEL broke $70,000.

Despite its charms, and a massive outpouring of love from the enthusiast press, the Q45 never caught on with shoppers. While the Lexus LS 400 scored more than 41,000 sales for 1990, the Q recorded slightly fewer than 14,000.

The Q45 was redesigned for 1997, and discontinued after 2001. While the Q45 never met with wide acceptance from customers, enthusiasts continue to be fascinated by the car. As with many cars that go unappreciated when new, the Q45 now enjoys a certain cult following, with clean examples including the Touring Package commanding up to $10,000 in private sales. 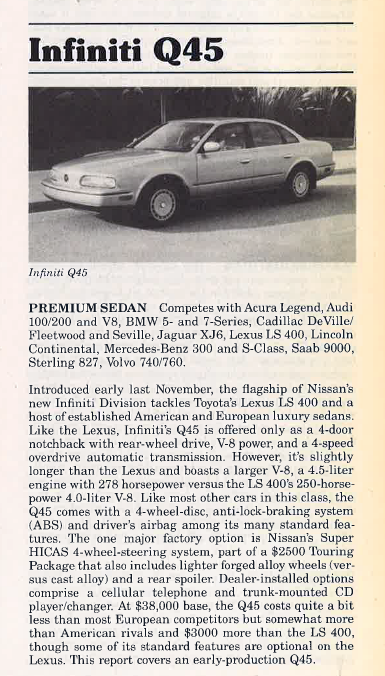 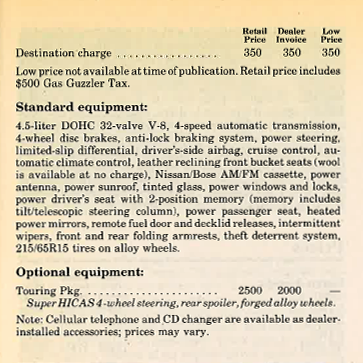