Since the shotgun marriage of Chrysler and Fiat in 2009, Fiat-Chrysler Automobiles CEO Sergio Marchionne’s annual press gathering at the North American International Auto Show in Detroit has become a much-anticipated event highlight.

Frank, plainspoken, and often hilarious, Marchionne is credited with saving Chrysler, and unifying that company successfully with Italian automaker Fiat.

Here are a few key Marchionne quotes from his meeting with the media at this year’s Detroit show. This conversation took place on January 11th, the first day of media activity at the event.

On his very public pursuit of General Motors as a merger partner:

“We’ve heard from more than one party about possible partnerships, and we had evaluated them all. They felt like suboptimal choices. There is a hierarchy of potential combinations, and GM was at the top of that list.”

“[Automaker] consolidation in my view is unavoidable. We are no longer car companies, we are technology companies. Prognostications about how that change is going to happen are fundamentally wrong. There is no way to project how this will happen.

We don’t want to become simple assemblers. We started in this business building everything on a car. If we start losing control of powertrain by going too quickly into electrification, we lose control of the vehicle itself. Intruders [such as Google and Apple—ed.] are attempting to occupy this space.

We need to dictate terms of that interface. It’s the only way to remain independent. There are one hundred different solutions, none of which matter to consumers—and all of which waste capital. To develop these solutions independently is foolish.”

On a future merger:

“We need to put this house into a shape that makes consolidation more attractive to other makers. I am very wary of this understanding that we are changing from a car business to a transportation business. We still need to make cars.”

“We will play that game if we think it becomes a dominant issue. This is not painless. If we look at this in realistic terms, it may be nothing.”

On conversations with Uber and Apple:

On business in Europe:

“Europe is going better then expected.

Have buying habits of Europeans changed during the slowdown? I don’t think we’ve seen a fundamental change in product expectations. That said, I don’t think we will see a full recovery in Europe during our 3-year plan.

Brazil is now our biggest issue. Europe is out of intensive care.”

One the recent FCA stock-price drop:

The issue is whether we buy [carbon-offset] credits or we spend the money to develop technology consumers may not want. It is a tradeoff between the rollout of technology versus operating efficiency.

It would be foolish of us to work ourselves into a ball instead of taking advantage of an easier short-term solution.”

One diesel acceptance in the wake of the Volkswagen emissions scandal:

“I think diesel has been hammered. It has suffered harm, though not irreparable harm. Diesel is a much more viable alternative than people believe. I don’t think that what VW did was a reflection on diesel as much as it was a reflection of poor governance.”

“Whether or not we have quality issues depends which research agency you use. I have phenomenal respect for Consumer Reports, but they have their particular requirements.

The Wrangler, for example, is not recommended. It’s the most sought-after vehicle we produce. It’s the most incentive free. Wrangler is dismissed and ignored.

We can tell our quality is improving because warranty claim costs are dropping.”
On boosting Ferrari production volume:

“We’ve been clear that we plan to move to 9000 cars a year gradually. We plan to build one car less than the market demands.

We do have some very long waiting lists for some of our cars. We don’t want to restrict access and kill demand. There is an 18-month waiting list for some 488 and Spyder models, for example.” 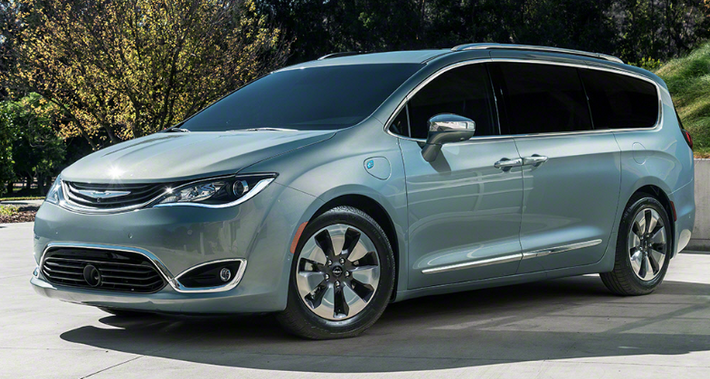 On naming the 2017 Chrysler Pacifica minivan:

Note: The Pacifica name was applied to a Chrysler crossover sold between 2004 and 2008.

“Pacifica represents the first in-house all-new architecture from scratch in almost seven years. It’s a hell of a move forward.

Regarding the name, I don’t think Pacifica was out there long enough for anyone to remember it. We’ve had long discussions about this. I came away with a firm view that, given the fundamental improvements to this vehicle, we had to de-link it from the Town & Country. We checked to determine the historical remnants of the [Pacifica] name. The name is known, but there aren’t any negative connotations attached to it. The vehicle didn’t sell well, but people didn’t dislike it.

Regarding the plug-in hybrid version of the Pacifica minivan: Will we lose $14,000 on each unit as we do with the Fiat 500e [electric car]? Hell no.”

On the demise of the Dodge Viper:

“Viper was a labor of love. There is the possibility of a new version, but whether it resurfaces in a reasonable amount of time I cannot say. We have not made that decision. Financial arguments to keep the current car don’t add up.”

On finding a successor:

I need to finish 2018. One of my jobs is to find a successor. They [the FCA management team] get banged and abused. If they survive–they might be in a position to take a bite of this. Pity the poor bastard that takes over after me.”