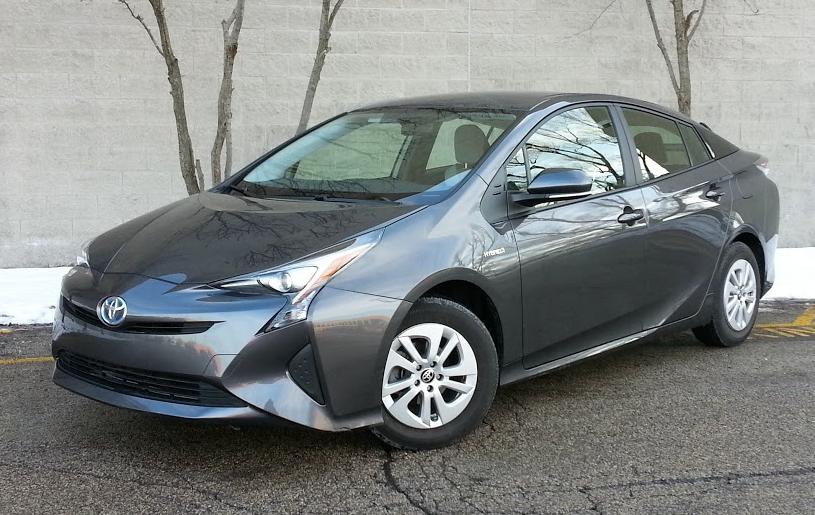 The not so good: Visibility to rear corners, rear-seat legroom

It’s newer, it’s nicer—and it’s still a Prius. That’s the quick summary of Toyota’s 2016 compact hybrid hatchback, which moves into its fourth generation with updated styling to its familiar shape, a redone interior, a lower and wider stance, and higher fuel-economy ratings. 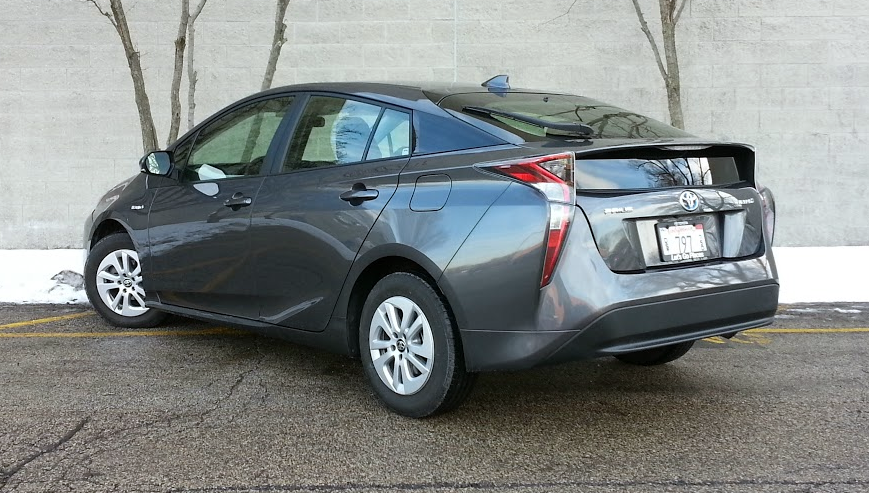 The ’16 Prius borrows many of its styling cues from Toyota’s hydrogen-powered Mirai, now on sale in California.

This latest Prius is, of course, still all about fuel economy. With reduced aerodynamic drag as a result of the new styling, EPA ratings have been hiked from 51 mpg city/48 highway to 54 city/50 highway (and a new Eco model is ticketed for 58/53). With the preproduction example provided to Consumer Guide® editors to test, this driver averaged 47.9 mpg from a 163.4-mile trip (60 percent under city conditions), all in “Normal” mode. Drivers can also select “EV” and “Power” modes that, respectively, allow some additional all-electric operation or a bit more ready acceleration. In this driver’s experience, Normal was fine for urban commuting. 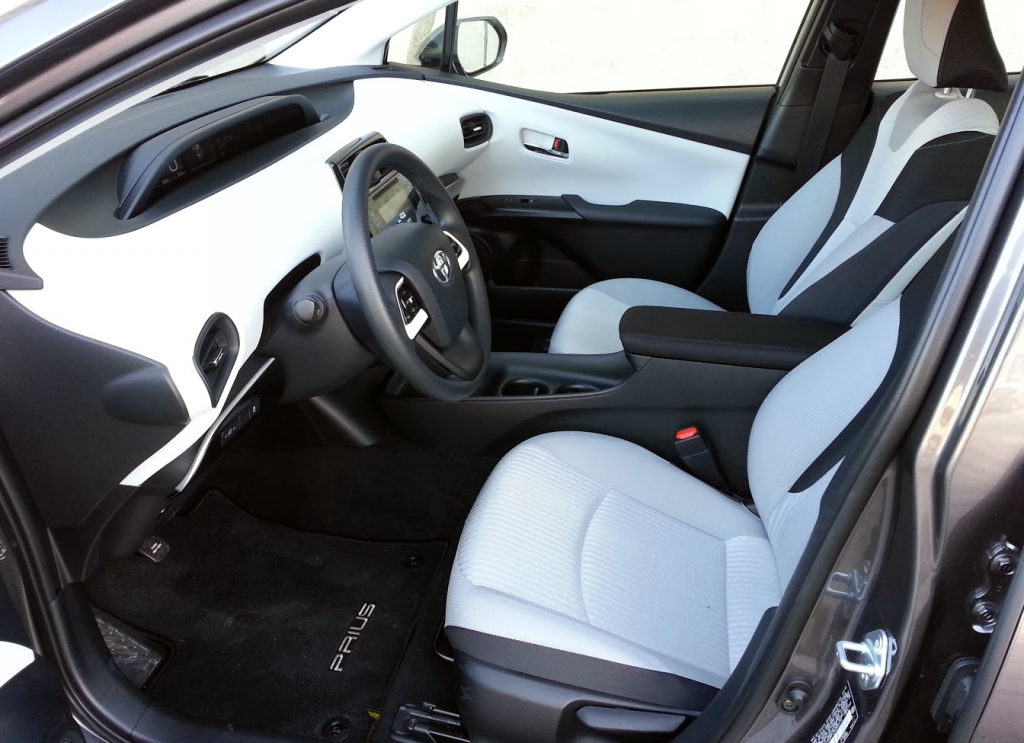 The 2016 Prius retains a centrally located gauge cluster, but the new dashboard has a slightly “swoopier” feel than its predecessor.

The Prius continues to use a 1.8-liter four-cylinder gasoline engine, augmented by a synchronous alternating-current motor, and channeled through a continuously variable transmission. Combined system power is 121 horsepower. It’s a hybrid, not a hot rod, but the Prius gets off well from a standing start, and cruises comfortably on the expressway. Transitions from electric-motor operation to the internal-combustion engine are nearly undetectable.

Though the seating position has been lowered in the new Prius, there’s a great view through large windows ahead and to the sides. Looking around from there, however, over-the-shoulder vision declines thanks to a thick B-pillar and the sloping roof that ends in a substantial rear pillar. Straight back is the divided two-pane design that’s been on every Prius since its generation-two switch to the hatchback body. 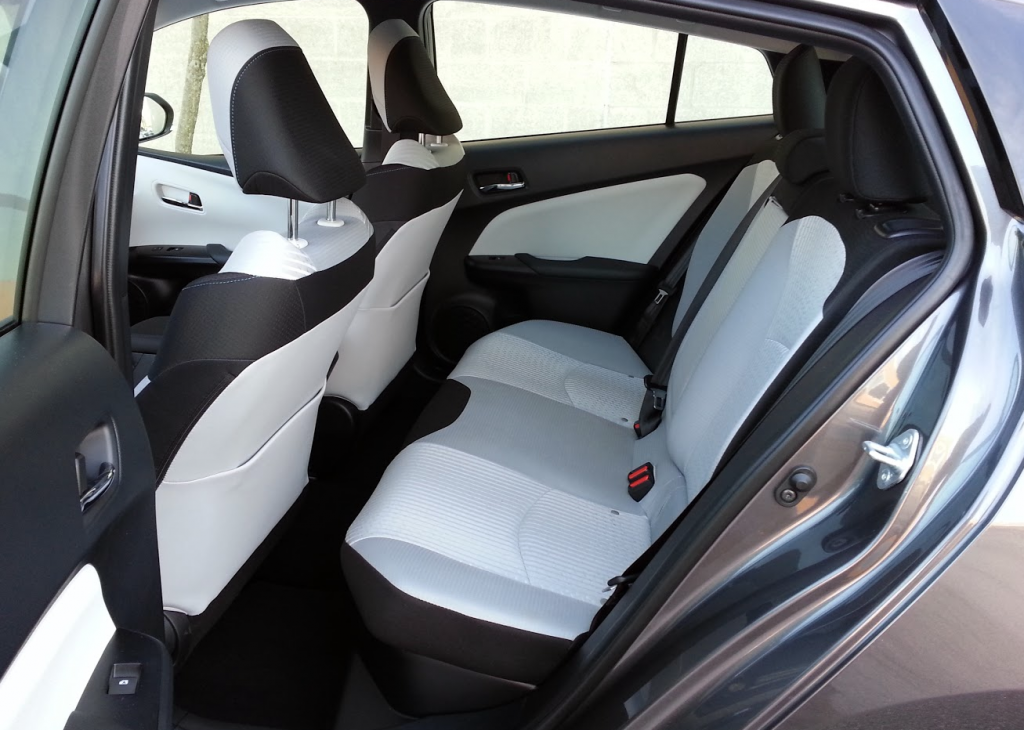 Rear-seat legroom is down slightly from the previous-generation Prius.

The black-and-white seats in the test car offered nice support and fit right in with other cabin décor that mixed black and white components. Leg and head room are great up front, somewhat less so in back, where the redesign has added cargo space but reduced leg room by 2.5 inches. The floor is fairly flat, but legitimate adult rear seating is confined to two persons. As in the past, driving instruments and vehicle-system information is displayed on a screen at the top center of the dash. The new unit shows up large and bright. Audio and navigation displays are on a separate screen in the middle of the dash, above climate controls that use a mix of function buttons and toggle levers, the latter for temperature, fan-speed, and mode settings. (One neat touch is that heated or cooled air can be directed primarily to the driver—sensible for those times when no additional passengers are being carried—or vented generally throughout the cabin.) The shifter resides in a panel below the climate controls; the “T”-track shifter pattern of past Priuses has been retained.

Generous interior storage makes up for a smallish glove box with a large forward console bin and a deep console box with a tray. The console holds a pair of open cup holders and plug-ins for digital devices and 12-volt power. Front doors have map pockets with bottle holders, but the cuts in the rear doors are only big enough for bottles. There are pouches on the backs of the front seats, and cup holders in the pull-down center arm rest.

The covered cargo area has only the slightest lip; it loads almost as flat as an SUV does. Space is good enough for a bit of luggage or lots of groceries, but possibilities expand greatly when the rear 60/40 seats are folded. There’s some offset from cargo floor to seat backs, but a cover panel eases the transition from one surface to the next. 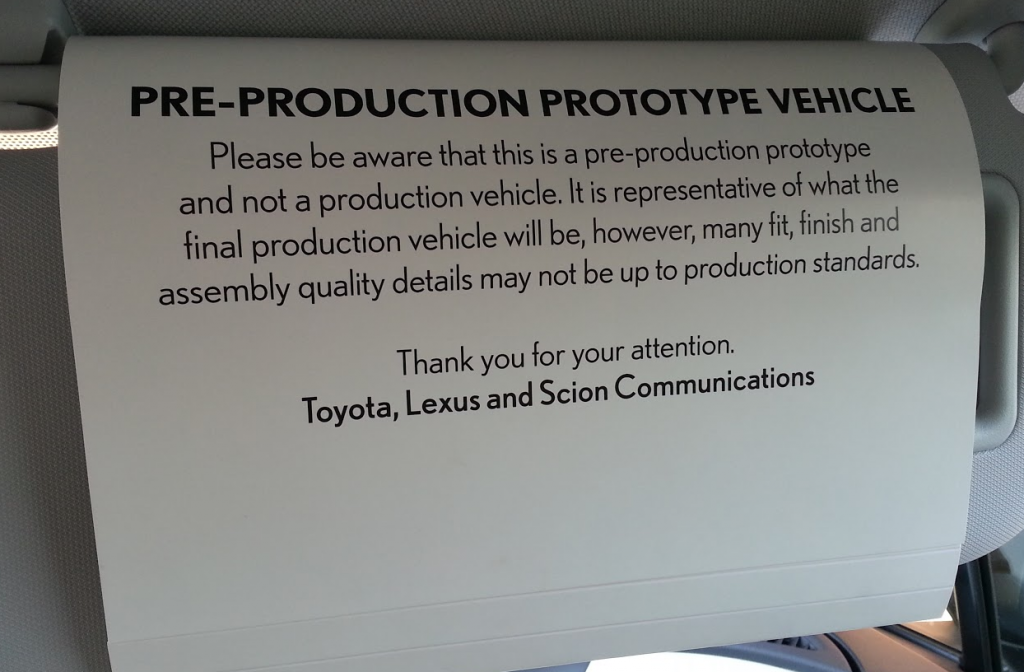 Consumer Guide’s test Prius was a pre-production prototype, so some of its fit-and-finish elements and trim details weren’t entirely up to production standards.

The rear suspension has been redesigned with the goal of improving ride and handling (and creating more cargo space). While some noise gets through at expressway speeds on the test car, ride was undisturbed by all but the worst bumps. Steering is light and easy—maybe a little too so for some tastes. Similarly, braking lacks a meaty feel. The car certainly stops well, but it doesn’t telegraph that this is going to happen early in the pedal travel.

The 2016 Prius isn’t only competing with other hybrids at the start of the new model year. It’s also competing with cheap gas that may make some prospects rethink their choices. Either way, being newer and better can’t hurt the Toyota Prius.

Once I had acclimated to the center dash-mounted instrument panel, I was entirely at ease with the 2016 Prius. By “at ease,” I mean that there’s little else to adjust to. This fourth-generation Prius is almost entirely devoid of the balky rengenerative braking and occasionally clunky engine/motor indecision that are typical of hybrid vehicles in action. Yet, were it not for the engine stop/start feature, I expect few drivers would know that this new Prius is a hybrid at all. 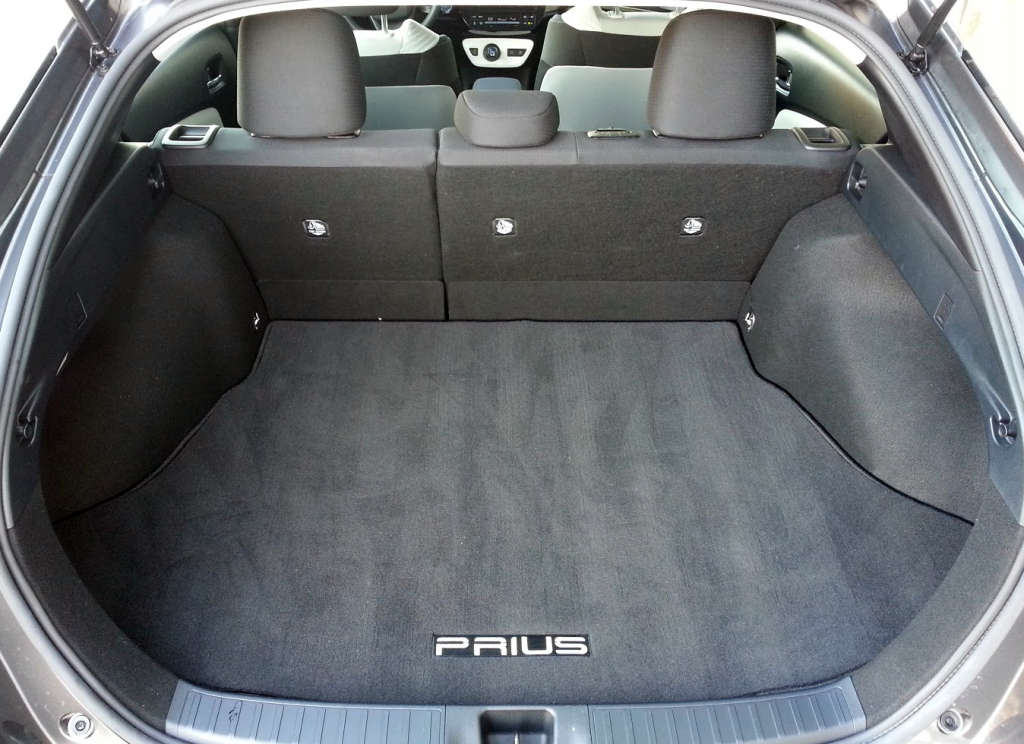 Prius boasts a generous amount of cargo space under the rear hatch.

And that’s this car’s charm. The new Prius is simply a fine car—a fine car capable of breaking 50 mpg. And regarding mileage, I was on pace—according to our test car’s trip computer—to see fuel economy of around 55 mpg before Chicago-area temps dropped 30 degrees. Still, I saw about 45 mpg, and expect that a retest under balmier conditions will bear out this vehicle’s true fuel-economy potential. 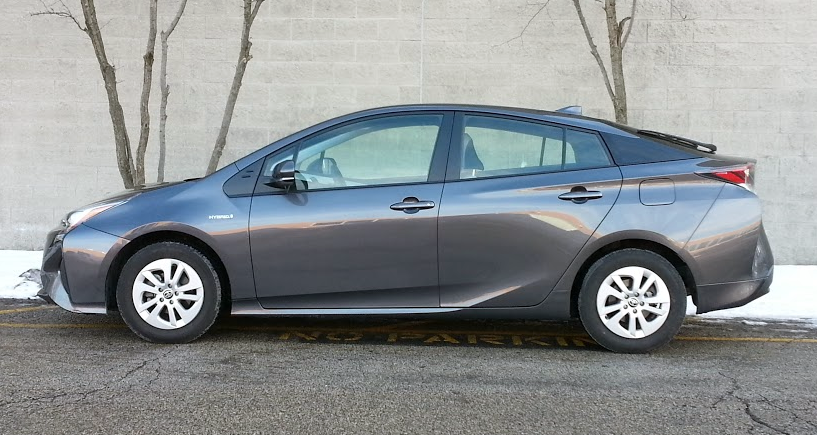