A Sprinter No More: Introducing the 2014 Ram ProMaster Cargo Van 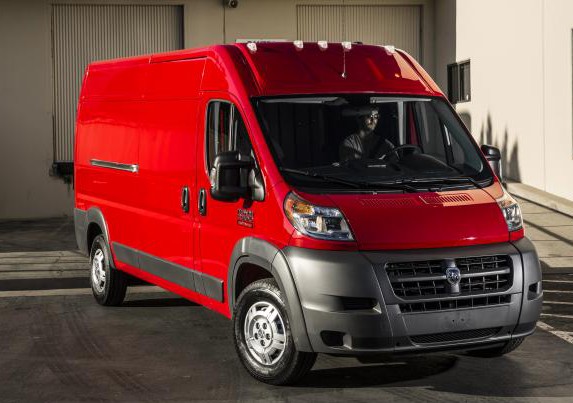 The ProMaster is the Americanized cousin of the third-generation Fiat Ducato, the most popular full-size van in Europe.

When it comes to offering a commercial cargo van for 2014, Ram is dancing a familiar step but with a new partner. The ProMaster is based on an established design from Chrysler Group’s Italian parent Fiat. It fills a void left by the erstwhile Sprinter, another high-roof walk-in van that Ram’s predecessor, Dodge Truck, had been granted back when Chrysler was under the control of a certain German manufacturer known by its three-pointed star.

The ProMaster is the Americanized cousin of the third-generation Fiat Ducato, the most popular full-size van in Europe, and a nameplate that has been around for more than 30 years. It keeps Ram in the big-van field, which includes other European designs like the Mercedes-Benz Sprinter and Ford Transit (coming to the U.S. in 2014 as a 2015 model), the Nissan NV 1500/2500, and a trio of old-school domestic products: the Chevrolet Express, GMC Savanna, and Ford E-Series. Against these rivals, Ram claims class-topping cargo capacity and payload, turning radius, and interior ceiling height.

ProMasters are available in three series, three wheelbases, and in a choice of two roof heights. Aside from vans, chassis-cab and cab-cutaway versions are also offered for the installation of aftermarket bodies. Engine choices consist of a gasoline V6 and a turbocharged diesel inline four.

The 1500 series includes a low-roof van on a 118-inch wheelbase, plus low- and high-roof models with a 136-inch stretch. There are three high-roof 2500s: panel vans on 136- and 159-inch chassis, and a window-side model on the longer wheelbase. The 3500 range features two high-roof vans on the 159-inch wheelbase, one with an extended-length body. The series is also home to the ProMaster chassis-cabs and cutaways, both of which are available on the 136- and 159-inch chassis.

Vans are constructed of a unitized body with an integrated subframe that runs the length of the vehicle. Roof heights are 90 and 101 inches. Ram claims the side walls, standing at nearly 90 degrees relative to the cargo floor, are the most vertically oriented in the field. A passenger-side sliding cargo door is standard, with a driver’s-side slider offered as an option. Parallel rear doors can fold almost flat to the sides of the van, a boon for transferring cargo at loading docks and in tight spaces. Five tie-down rings in the sidewalls and up to 12 in the floor help to secure cargo. Partitions are available to separate occupants from shifting loads.

Protection of components and ease of repair were factored into the frontal styling, such as it is. Headlight/turn-signal units are placed high, up out of the way of most fender-bender contacts. The massive “cow-catcher” grille and bumper ends are three separate pieces, allowing for selective replacement of damaged portions.

The standard powerteam in the front-wheel-drive ProMaster is a 280-horsepower 3.6-liter Pentastar V6 hooked to a 6-speed automatic transaxle—essentially the Chrysler minivan engine/trans team. Optional is a Fiat-designed 3.0-liter inline turbodiesel 4-cylinder engine. The EcoDiesel powerplant, which is making its North American debut in the ProMaster, makes 174 horsepower, but its 295 pound-feet of torque (at just 1400 rpm) bests the larger-displacement V6 by 35 pound-feet. The four is paired with a 6-speed M40 automated-manual gearbox that can be manually operated via the dash-mounted shift lever. EPA-estimated fuel-economy figures for both engines were not available at the time of the media preview for the ProMaster.

McPherson-strut front suspension and a rear beam axle with leaf springs in five different states of tune support the various ProMaster models. The four-wheel disc brakes feature large 16-inch rotors in front. Standard wheels are 16×6-inch steel shod with 225/75R16 all-season tires. Full wheel covers and alloy wheels are optional for a dressier look. Depending on engine and suspension selection, the ProMaster is capable of up to 5145 pounds of payload capacity and can tow up to 5100 pounds. 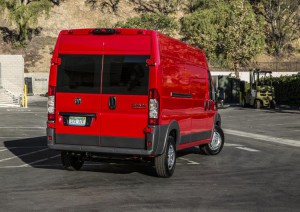 The division didn’t just slap a crosshair grille and ram’s-head logo on the front and call a Fiat a Ram. The ProMaster was modified in a number of areas to take into account government safety and emissions regulations, plus a number of severe climate and road-condition extremes unique to the U.S. market.

The front-wheel-drive powertrain allows for a low 21-inch step-in height and for narrow rear wheel houses that make it possible for standard-sized pallets to be loaded into the cargo space with inches to spare on either side.

Dark gray interior trappings are commercial-grade sturdy. Two individual cloth seats (vinyl is optional) are standard, but a bench seat can be ordered. Drivers enjoy a commanding view of the road from far forward in the vehicle. The steering wheel telescopes—but doesn’t tilt—to aid in finding the right driving position. A rear parking-assist system and a back-up camera are options; from our brief run in a 159-inch-wheelbase ProMaster, both ought to be very welcome. Also available are Bluetooth hands-free telephone capability and a GPS navigation system.

It appears that the full-size ProMaster won’t be the only Fiat-derived van in the Ram fold. The brand is expected to roll out the ProMaster City, perhaps as a 2015 model. Based on the Fiat Doblo, it would be sized to compete with smaller vans like the Ford Transit Connect and Nissan NV 200, and would almost certainly replace the Ram C/V, the commercial variant of the Dodge Grand Caravan minivan.