The good: Comfy well-bolstered seats, though some will find them confining

The not so good: As-equipped price dangerously close to $40,000

In some ways, 291 horsepower doesn’t sound like a lot for a racy car these days. Sometimes, though, horsepower—like age—is just a number.

The Mitsubishi Lancer Evolution GSR is rated at the aforementioned 291 ponies, pretty good for a 2.0-liter dohc 4-cylinder engine. Of course, it gets some help from an intercooled twin-scroll turbocharger that spools up pronto with a stomp at the gas pedal to deliver strong, right-away acceleration. The shifter for the five-speed manual gearbox that was in the test model is precise, following a well-demarcated path through the gates to help drivers snap off crisp shifts. The clutch is stiff, but not enough to make a chore of tame launches in normal stop-and-go driving. With a few miles inherited from a previous driver, this tester averaged 17.18 mpg over 121.1 miles, 60 percent of which were in city driving conditions.

There’s a solid, in-control feel when sprinting down an on-ramp to join expressway traffic or in quick changes of direction. Steering is somewhat heavy in low-speed maneuvers, but frees up at highway speeds. The big Bembro discs at each wheel provide quick, sure stopping power. The ride is hard, though—bumps and cracks in the road do not by any means go unnoticed—and quiet is not an Evo GSR strong suit.

Speaking of control, that’s what the GSR’s standard Recaro front bucket seats do to whoever is sitting in them. Stiff bolstering panels on the backs and cushions leave little chance that occupants will be sliding around in a hard-driven Lancer Evo, though the wider-abeam motorist may find the bolsters unpleasantly confining. Tall side windows provide fairly good over-the-shoulder visibility, but the straight-back view is bisected by the full-width decklid wing. 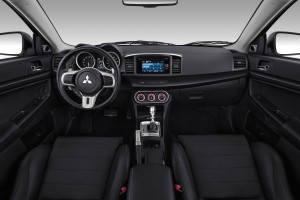 John found the climate-control switchgear refreshingly simple to use.

With a touch screen for all audio operations, the only controls on the center stack are easy-to-reach climate-control dials—simplicity itself. The cabin is neat, if not sumptuous. There’s a mix of hard plastics and soft-touch surfaces on the door panels, and the plastic dash top does have nice graining to it. A few bits of satin-finish silver plastic around the gauges and on the dash are about the only things that weren’t black in the test car.

Head and leg room are good in front and surprisingly good in back, too. Mitsubishi lists the Lancer Evo as a 5-passenger car, but it must mean only temporarily. An adult sitting in the middle rear position won’t want to do so for very long. Part of what makes up the Evolution GSR’s sporting character is attention to weight and balance (the roof, hood, and front fenders are made of aluminum). Toward that end, the washer tank and battery are moved to the trunk, where they reside in pictogram-marked compartments. This (and a subwoofer from the optional premium sound system on the test car) reduces trunk capacity to perhaps a couple soft-sided bags. Golfers need not apply. Interior storage is so-so. There are good-sized door map pockets and two covered cup holders in the console, but the console box is deeper than it is long and it sits too far back to be an effective arm rest. There’s a small cubby ahead of the shifter.

As optioned with high-intensity-discharge headlamps, “fast key” entry, and the Rockford Fosgate stereo, the Lancer Evolution GSR test car came to a considerable $37,790 delivered. That’s a lot for a compact sedan with fuel-mileage and cargo-capacity issues. But it’s packed with powertrain and chassis enhancements that will make that figure seem right to boy racers. Hey, it’s only a number, right?