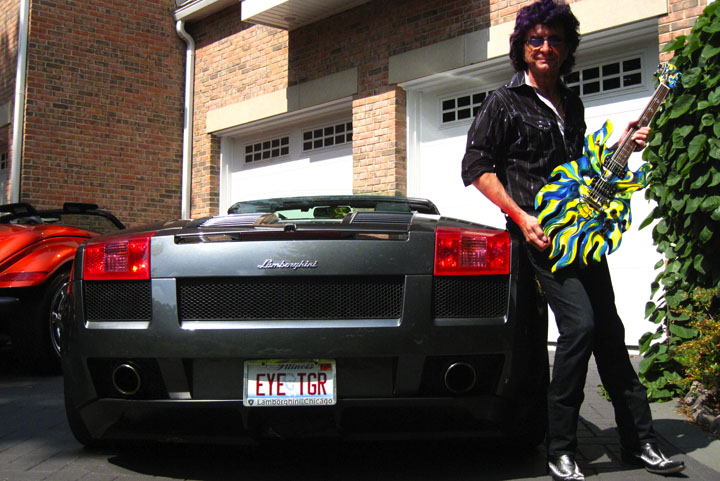 Guitarist Jim Peterik, former member of the band Survivor and cowriter of the classic song “Eye of the Tiger,” is an avid collector of cars and guitars.

Our colleagues Steve King and Johnnie Putman, Chicago radio personalities and car enthusiasts, recently visited with Jim Peterik, best known for his work with the Ides of March (“Vehicle”) and Survivor (“Eye of the Tiger”). In addition to his massive guitar collection, Peterik also collects automobiles.

In this recent interview with Steve & Johnnie, Peterik shows off his 2008 Lamborghini Gallardo. “A certain gentleman I know who plays guitar had it up to 135 miles an hour on the Eisenhower at 3 a.m.,” Peterik said. The rock legend also shows Steve & Johnnie his 2002 Plymouth Prowler, 1955 Chevrolet Bel Air, and award-winning 1958 Chevrolet Corvette.

More about Steve and Johnnie

Up until December of 2011, almost 27 years of the radio part of our married life was spent co-hosting, what became, Chicago’s #1 overnight radio show on WGN.  Although we no longer face the demands of a daily radio show schedule, we still maintain our residence as part of the WGN Radio family with occasional “drive-by” shows and guest appearances.

Along with having a couple more books and Steve’s new album in the pipeline, we continue our love of interesting things on wheels and you can regularly find our Video Road Tests posted right here on Consumer Guide Automotive’s Daily Drive website. You can see what other Internet tricks we have up our sleeves on our homepage.