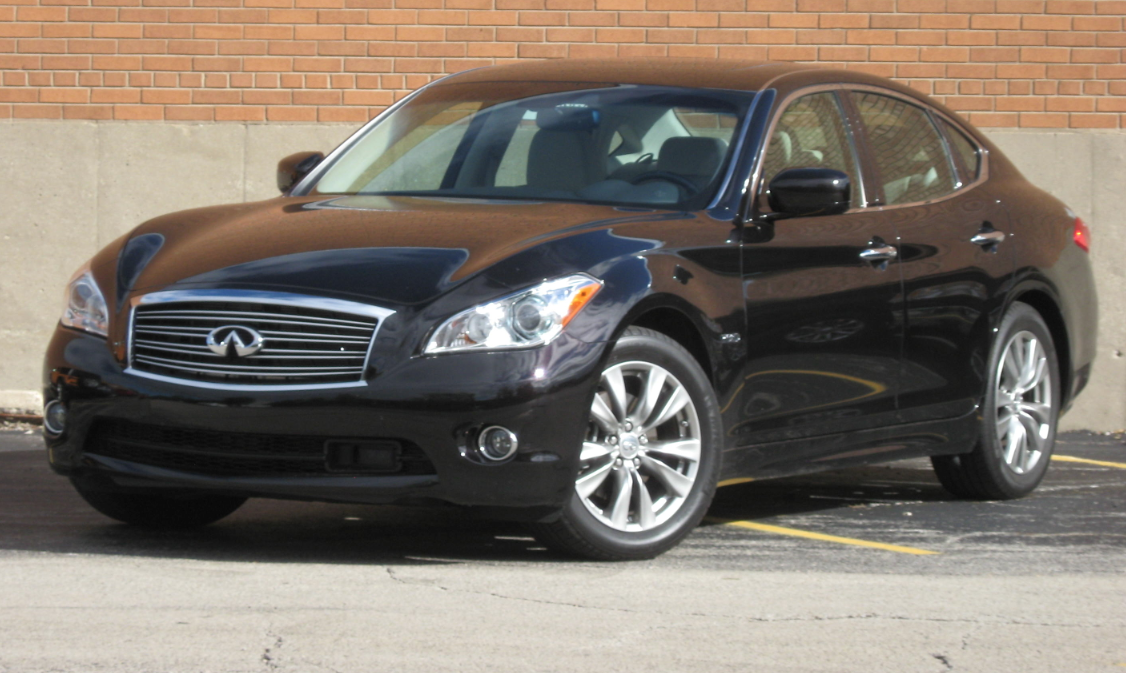 The 2013 Infiniti M Hybrid enjoys an EPA estimated 8 mpg advange over the base M37.

The good: Good fuel economy for the power

The not so good: Occasional quirky drivetrain behavior

Any Infiniti M makes a pretty good first impression. It’s a good-looking, if somewhat anonymous, car from the outside, and inside the slightly-over-the-top silver-rubbed wood trim impresses mightily. In this regard, Infiniti has taken a cabin-design tack more along the lines of Cadillac’s overtly sumptuous approach, rather than the more stolid BMW/Lexus restrained-luxury look.

The M Hybrid (as this vehicle seems to be officially dubbed, despite the decklid M35h badge) makes a good impression underway, as well. In fact, were in not for the eerily silent engine-less travel away from a stop, most drivers would never know this vehicle sports a hybrid drivetrain. Massive amounts of power are available immediately, and the transitions between electric and gasoline power are, for the most part, seamless.

The M Hybrid is not without its quirks, however. Our test car was subject to subtle surges in speed while cruising at constant speeds between 45 and 55 mph. Nothing deal breaking, but annoying nonetheless. Additionally, all M models, the Hybrid included, seem to pound over potholes and rough spots more than other cars in the class.

I averaged about 25 mpg during my time in the M Hybrid. While that’s hardly economy-car mileage, it’s rather exceptional for a vehicle that runs from 0-60 mph in around five seconds.

Luxury shoppers looking for something very fast, reasonably frugal, and really nice inside could do far worse than to test drive an M Hybrid. Just don’t forget to check out the diesels Audi and Mercedes-Benz are rolling out this year, too.

I was impressed by how frequently I was able to drive in EV mode. I would often be cruising at 35-40 mph on solely electric power… don’t remember being able to do that in a Prius. Definitely weird to be holding steady at 35-40 and look down and see the tach at zero… gas engine’s start-up at those speeds is definitely noticeable, but not alarming… it’s fairly well integrated.

However given the seemingly prolonged EV operation, I was hoping for better all-around fuel economy than the 26.9 mpg I recorded. Still, that’s not a bad number for a vehicle of this size, power and luxury. 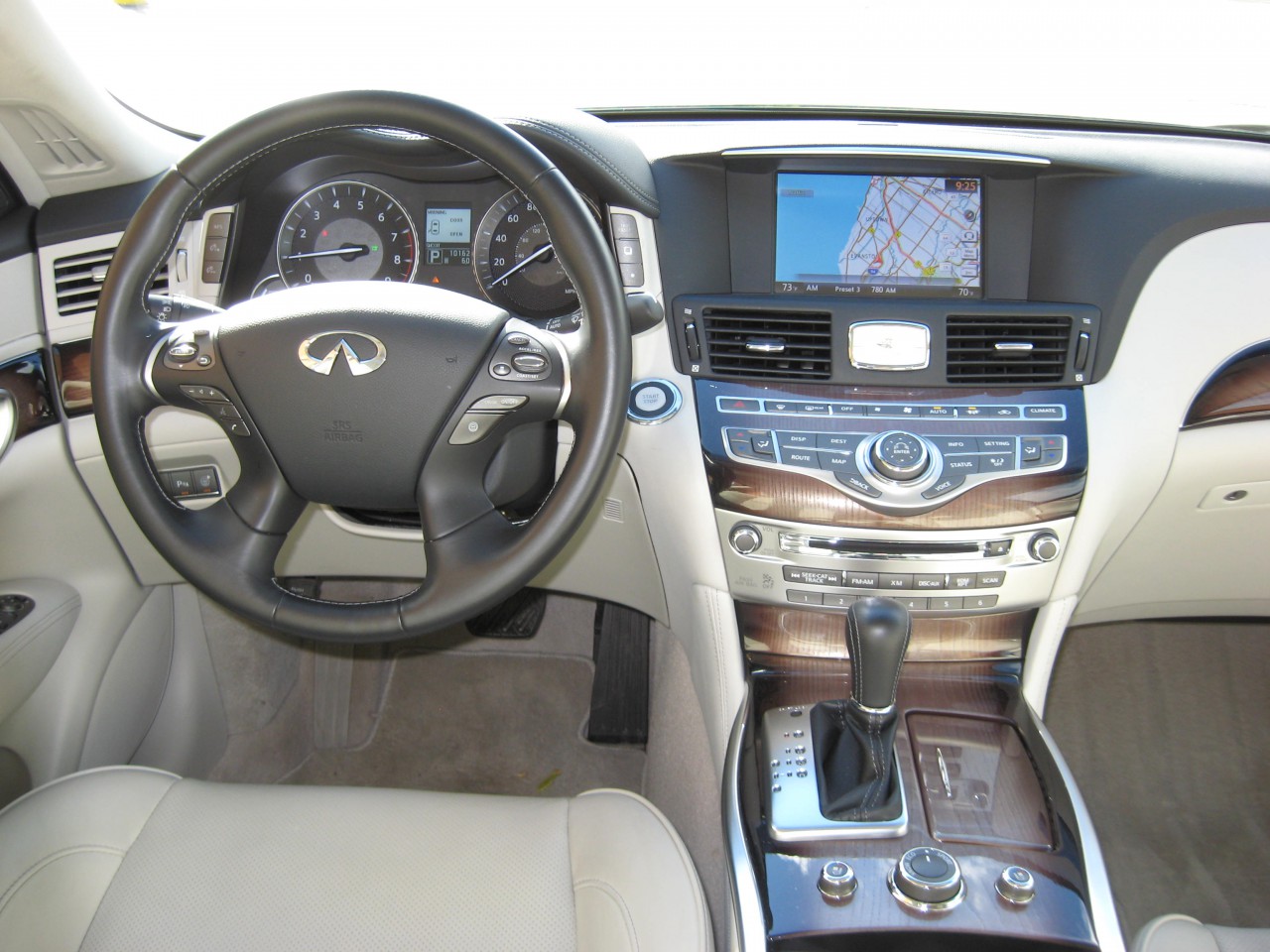 The workings of the hybrid powertrain intruded slightly on the lux feel of the car  (a slight bog in acceleration here, a minor hiccup upon brake application there), but it wasn’t a deal breaker, and I think owners would acclimate fairly quickly.

Ride quality and all-around quietness (despite the minor whirrs and whines of the hybrid system) are high points.

Ever since its introduction in 2006, one of the Infiniti M’s strongest marketplace challengers has been right across the showroom floor: the nearly as large but far less expensive Infiniti G.

What the M had going for it was a little more room, a little more luxury, a few more features, and an available V8 the G didn’t offer. For 2013, the M added a hybrid model to this list.

Infiniti markets the new M35h as “The High Performance Hybrid,” and that’s really not overstating it. With the V6/electric motor combination good for 360 horsepower (30 more than the V6 in the “normal” M37), this is one hybrid that scoots. We estimate a 0-60-mph time in the low 5-second range, which is quick even for the premium-sedan class.

But while it has power aplenty, the resulting punch isn’t always instantly available. Part of the fuel-saving strategy is to shut off the gas engine under low-load conditions, such as at a stoplight, going downhill, or sometimes in steady-state cruising. If you nail the throttle when the engine is shut off, it sometimes takes an extra beat or two for acceleration to arrive; occasionally, it’s delayed a bit even if the engine is running. Also, there are times when the gas engine off/on transition isn’t entirely transparent, making for some subtle but noticeable surging motions while underway.

Of course, the main idea of having a hybrid version of the M is to offer improved fuel economy, and this the M35h does – though perhaps not as “improved” as the added cost can justify. I averaged 25.4 mpg in the M35h, while we averaged 20.6 in an AWD M37. (The M35h comes only with rear-wheel drive). That’s a notable increase to be sure, but the price premium for the hybrid amounts to about $6000. That pays for quite a lot of premium-grade fuel, which all Ms—including the hybrid—require.

Another “expense” associated with the hybrid system has to do with cargo space. The battery for the hybrid system is mounted on the back wall of the trunk, which not only deletes the normal trunk pass-through (Ms don’t offer folding rear seat backs), but it also steals cargo space. What’s left is a wide but very short well that contains just 11.3 cubic feet of space (vs. 14.9 in other Ms). Interior storage is nothing special, either, as the only space of any size is the two-tiered console box; the glovebox is rather small, and there are just two cupholders and a small tray in the console (both covered) and small map pockets in the doors.

In the past, I would also have enthusiastically added “control layout” to that list, but while it’s still better than the norm in this class, there were some unexpected glitches.

I’ve always appreciated how Infiniti does a stellar job of separating climate, audio, and infotainment controls, as many companies combine the last two, much to the detriment of clarity and ease of use. Infiniti also relies more on physical buttons than touchscreen controls, the latter of which often require multiple steps to accomplish what one push of a button does in the M. However, for some actions (particularly with the navigation function), after you first push a button on the center stack, you then have a long stretch to the touchscreen sunk into the top of the dash to make further selections. Sometimes you find yourself going back and forth between the buttons and the screen, which is hardly convenient. Furthermore, climate controls consist entirely of repetitive-step pushbuttons rather than more convenient knobs. On the positive side, the “voice” in the navigation system includes street names in the turn directions, which not all do. So I’d still put control layout down as a strength, but not the Herculean one it used to be.

Our tester tipped the price scale at $54,200 to start, $66,245 after options were added. That’s a bunch, and I wonder how many people paying 50 large for a car are worried about getting an extra five mpg. But the M35h does deliver, even though there are “costs” for the hybrid system that don’t have a dollar sign in front of them.