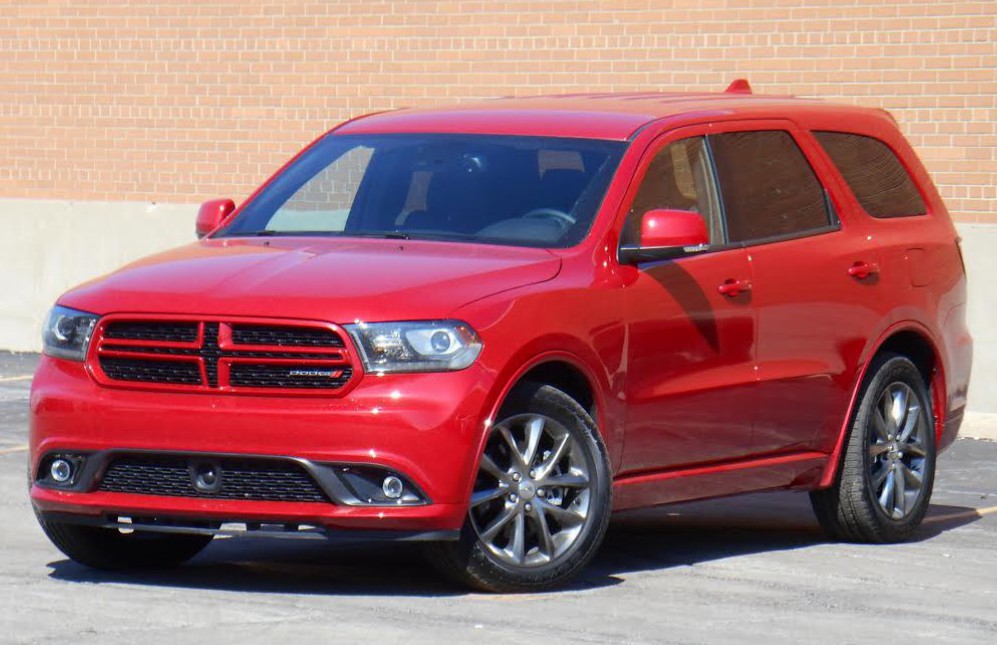 The great: loads of power, sharp handling for such a large rig

If you’re interested in a full-size SUV that walks a little on the wild side, the Dodge Durango R/T just might be the ticket. It delivers three rows of passenger capacity or plenty of cargo room as the situation dictates, packs the punch of a 360-horsepower Hemi V8 working through a smooth new 8-speed automatic transmission, and shows off some sporty design touches. 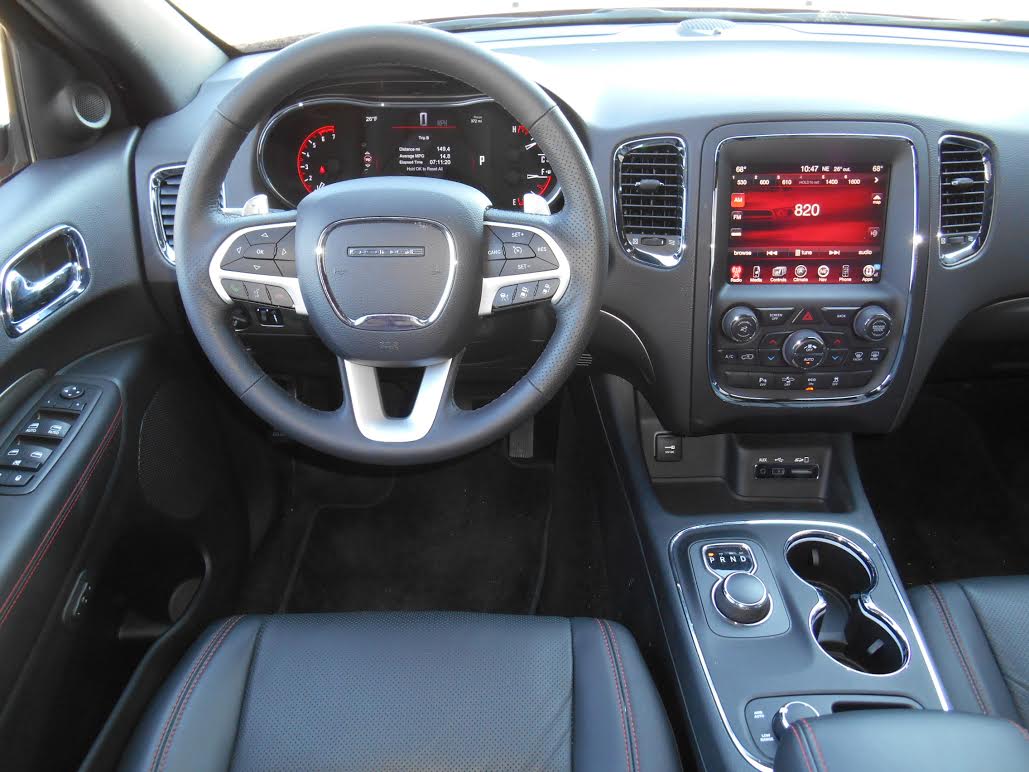 We’re generally not fans of touch screen controls in lieu of real switchgear, but John and Tom agree that Durango’s Uconnect interface is fairly easy to use.

Dodge has freshened up Durango’s styling for 2014. R/Ts stand out from the rest of the family thanks to a monochromatic exterior, black-out headlamp bezels, and a choice of 2 distinctive 20-inch alloy wheel designs. Interiors feature brushed-silver appliqués and black-leather seats with seams and R/T logos stitched in red. For as nice as they look and for as well bolstered they are on the sides, the front bucket seats and the optional second-row captain’s chairs that were on our test example weren’t very “giving” in the cushion or back. This driver could sense each of the several panels from which the seat surface was constructed—which could get a little old on an extended drive.

For more than 45 years the R/T badge has been applied to hot-performing Dodges of one kind or another. The ’14 Durango not only has its standard 5.7-liter V8 but a sport-tuned suspension and steering, too.

The Hemi mill propels the Durango without hesitation (the manufacturer claims 0-60 mph in the low 6-second range), and fairly quietly—at least until you tromp the accelerator. The ZF-built 8-speed autobox, which replaces 5- and 6-speed automatics used previously, uses a wide ratio spread and electronic shift mapping that “reads” how the vehicle is being driven and adapts transmission performance accordingly. It delivered excellent service in our expressway and city-street daily commute. Dodge has done away with a conventional lever for this transmission, replacing it with a rotary knob on the center console, but steering-wheel-mounted paddle shifters are standard as well.

Dodge claims the 8-speed helps improve V8 highway mileage by 15 percent—to an EPA-rated 14 mpg city and 22 highway with all-wheel drive, as our trial Durango was outfitted. We wish we had better news on the fuel-economy front but this tester saw just 14.25 mpg from a 161.3-mile stint in which 54 percent of miles were in city-style driving. This was with the “Eco” engine-management setting that influences shift schedule and fuel delivery activated, too.

There was nothing egregiously “trucky” in this big SUV’s ride, not with a fully independent suspension underneath. Steering response was fairly quick with good feedback that leaves the driver feeling connected to the road. Some cornering lean is unavoidable but it’s not bad on the Durango R/T. Our dry, all-pavement test period didn’t require anything extra of the AWD. 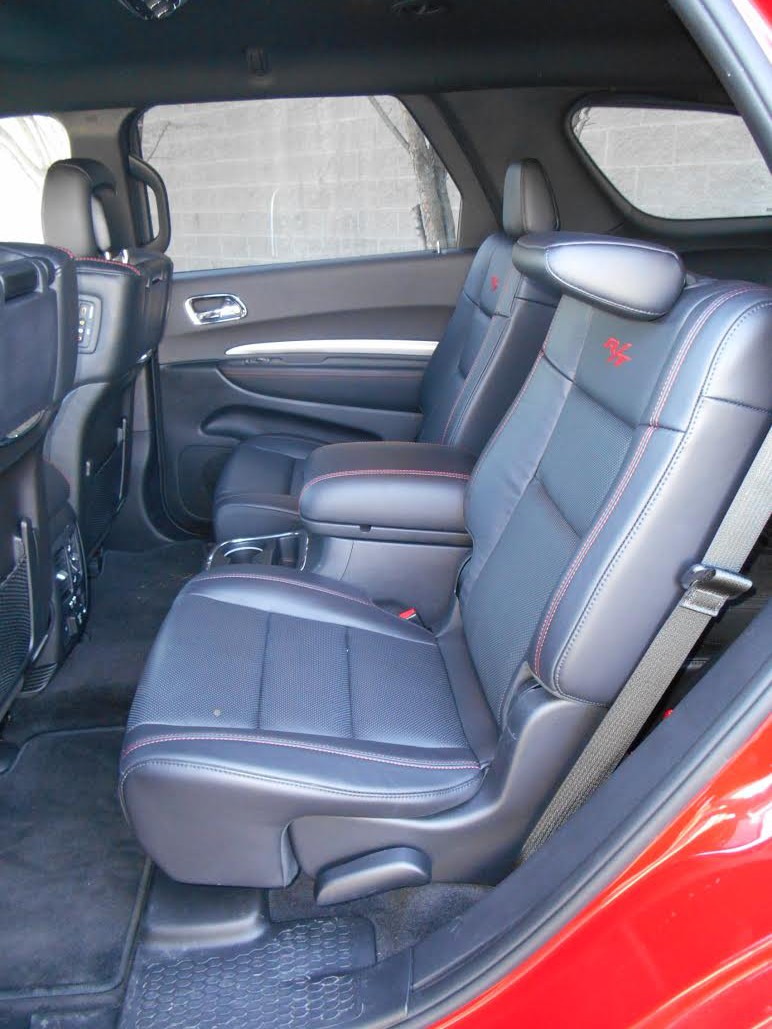 The instrument-panel center stack has been redone to accept new 5- and 8.4-inch touchscreens for the infotainment systems; our test vehicle had the latter with extra-cost navigation, high-definition radio, and satellite-radio travel info added to the standard Uconnect features. Drivers can do everything through the screen, though climate and audio settings can be worked with buttons and twist knobs beneath the screen. Instruments newly read out on a dumbbell-shaped 7-inch “thin-film transistor” color display that offers drivers numerous ways to see vehicle information presented. Despite basically being pictures of dials, the gauges show up well, and it’s hard to not know your speed with a large digital readout reporting to you from the center of the cluster.

Durango vs. The Germans

Head room is good and entry/exit are easy. For an SUV, step-in is uncomplicated. Front leg room is plentiful, but longer-limbed middle-row denizens hoping for acceptable stretch-out space may find themselves at the mercy of the folks sitting ahead of them. Front and middle-row seats are heated in the R/T. Third-row seats will accommodate a couple of friendly adults.

Cabin storage is pretty good, but the optional Blue-Ray/DVD video system (with flip-up screens built into the back of the front seats and an interface to accept electronic games) gobbles up a lot of front console-box space for the Blue-Ray player. The captain’s chairs can be ordered with an optional console that includes a covered storage area that’s deep and square-sided, and contains a USB-charging port and a 12-volt outlet. Third-row seats fold completely flat with the pull of a cord accessible from the rear of the vehicle. Middle-row seats—including the captain’s chairs—also fold flat when extra cargo space is needed.

One more thing about the Durango is (or can be) full-sized: the window sticker. The rear-wheel-drive R/T starts at $38,995 but the all-wheel drive on the one we sampled drove the base figure to $41,395. With copious comfort and convenience option packages thrown in, the price with delivery shot up to $49,965.

The R/T is my least favorite Durango. Color me dull, but I find that the R/T’s sports suspension, bigger wheels, and brash Hemi engine undermine the refined Durango goodness I so appreciate.

That said, Durango R/T is a pretty nice truck. Despite the firmed up suspension, Durango R/T still rides with sophisticated compliance, and despite the overly brash Hemi engine, sound levels in the cabin remain well muted.

And should you be immune to fuel prices, the Hemi certainly makes a case for itself in the passing lane and on onramps. The downside is that we averaged just under 15 mpg in what amounts to a roughly 50/50 city/highway driving split.

For me, a V6-powered Durango SXT Plus or Limited is the value buy, and the vehicle that best represents our Best Buy version of this big crossover. So configured, most owners will see average fuel economy near 20 mpg while enjoying class-leading ride, and quietness. 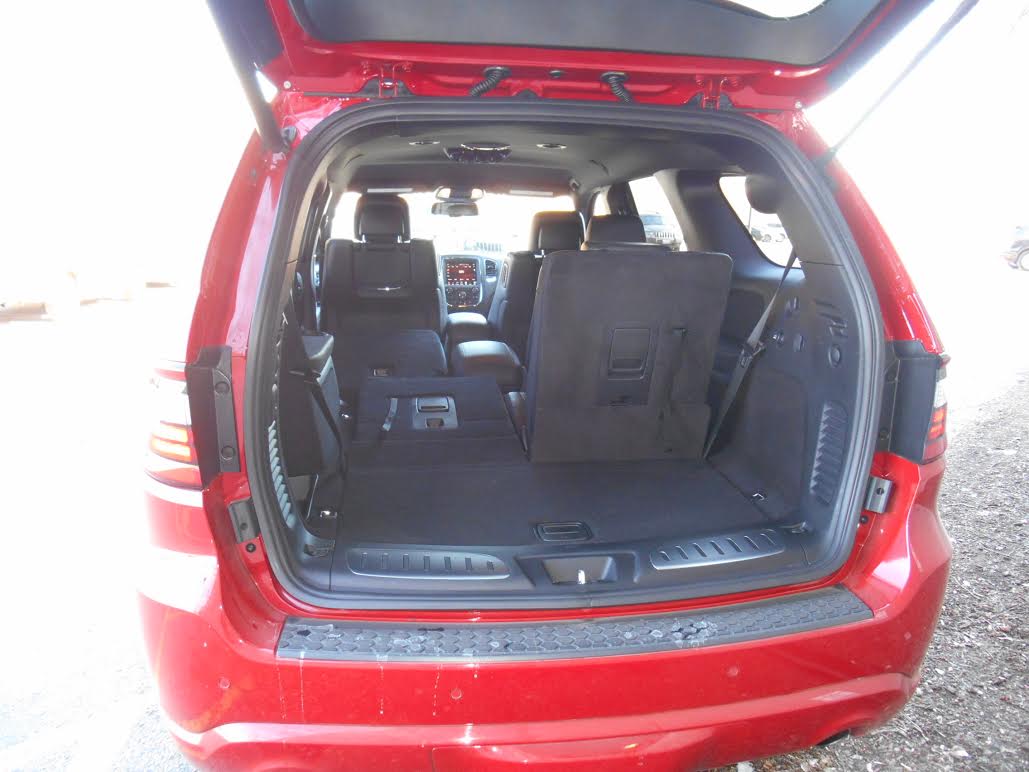 Quibbles? I would prefer an audio interface that was slightly less digital, and the rear bench, if so equipped, won’t accommodate three adults. That’s about it. Fact is, Durango is an excellent truck, even in R/T trim.

Durango Vs. The Germans